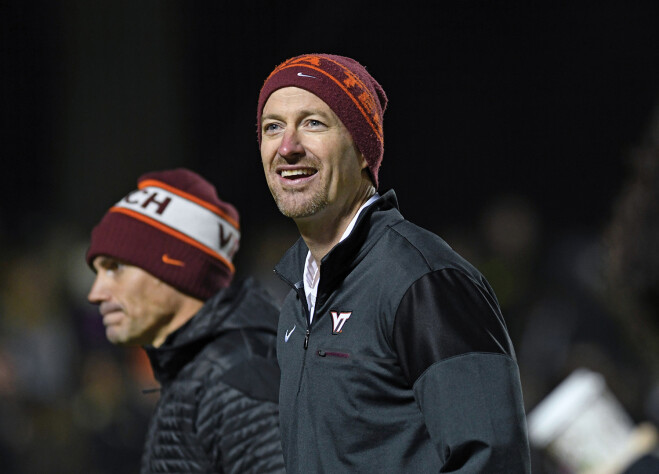 There’s an old joke that says watching soccer is like watching grass grow, except with soccer players in the way. The real joke is the absurdity of that statement because soccer – known as football everywhere outside the United States – is hands-down the most popular sport in the world.
In fact, Billy Beane, former professional baseball player, baseball executive, analyst and subject of the book Moneyball – made into a movie starring Brad Pitt – has stated:
Quite frankly, I can’t get enough of soccer. I tell my jingoistic friends in the United States there’s a reason why it is the world’s No. 1 sport. The rest of the planet can’t be wrong.
Virginia Tech’s Head Coach for the men’s soccer team, Mike Brizendine, grew up on the soccer field. Anything else he did, like kicking for his high school football team, was related to improving his own soccer performance. He attended James Madison University, where he developed a strong bond with Steve Draper who serves with The Navigators, a Christian campus ministry.
“We joke about having an arranged marriage,” Lucy reveals. “My parents, especially my dad [Steve Draper], counseled and shaped Mike into the man he became, unintentionally for me. We had met, but it wasn’t until I changed schools, and Mike heard I was bummed, that he called, perhaps to be nice to a friend’s sad daughter.” The couple married in less than a year and moved near Ferrum College when Mike took his first soccer coaching position. The following year, they relocated for his 3-year stint at Bridgewater College before settling in the New River Valley.
After five years as the men’s assistant soccer coach, Mike was promoted in 2009 to Head Coach, and Lucy wept in the stands at the news. “God has been so good to us,” she says.

Coach Brizendine brought the team into the history books last year with its appearance in the NCAA Tournament setting a program record of five consecutive trips to the NCAA Men’s Soccer Championships. Additionally, Brizendine surpassed his predecessor for the most NCAA postseason appearances as a manager in Virginia Tech history. He has coached 22 players who have moved into playing professional soccer.
“We recruit in every way possible,” the coach explains. “We start with Virginia high school students and branch out from here, watching films, going to tournaments and making tons of phone calls. We travel all over, and recruiting internationally has been an enjoyable part of my job.”
Brizendine looks for good character and high academics in each potential player, while the players are lured with the ACC, a beautiful campus and wonderful people. One of the most challenging aspects for any coach is the ever-changing landscape of college athletics. “I find the ways I did things further and further away from what these young guys do. I am continually working on being able to connect with them, and I have many awesome guys I enjoy being around.”

Mike and Lucy parent three kids who all play or have played and enjoy soccer but express their individual personalities with other interests as well. “My wife probably knows more about college soccer than a number of college soccer coaches,” states Mike. “On days when we aren’t playing, we enjoy watching games and knowing what’s going on in other leagues.” Lucy and the kids are more often than not on the sidelines of home and away games. “I drive our van with the girls, and we stay with Mike at away games as often as we can,” Lucy says.
Outside of soccer, different members of the Brizendine family enjoy piano, swimming, track, backgammon, arts and crafts and all the New River Valley has to offer. “What’s not to like about this region?” Mike asks rhetorically. “It’s a beautiful place to hike, ride bicycles, visit great coffee shops, eat in fun places, and get involved in the arts.”
Their faith and church life are central in the family. “I want our kids to know about real life, the one that only God provides, and to not be deceived by what’s going on in the world,” Mike explains. “We are raising our three daughters in a culture where there is so much pressure to conform, but we’re going against the current by doing a few things differently. Lucy and I are thankful that we’re not navigating this life alone.”
Though there are three distinct roles in Coach Brizendine’s life – working man, family man, Godly man – he has intentionally blurred the lines. His family has space in his career. His work includes his wife and children. And God is ever-present wherever Mike is and in whatever he is doing.