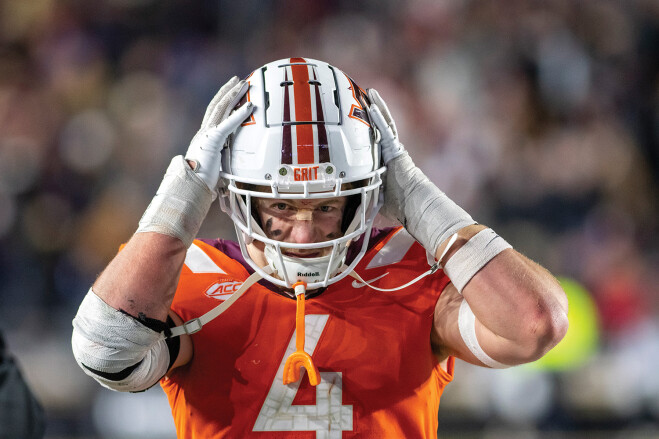 For years we’ve hung around sidelines, hoping to get a picture, a high-five, or even a signed ball from the star of the game. Afterward, we might head downtown to rehash the story over libations at the go-to college bar. Collegiate sports heroes have been dinner-table topics since their immortalization looked more like a black-and-white photo than a vexing TikTok trend.

Their local celebrity status always brought them plenty of fame, but unfortunately, no fortune. Now, thanks to the burgeoning “name, image, likeness” [NIL] movement, every student-athlete has the potential to earn income by selling the rights to themselves. If it sounds like a dicey playing field, it is … kind of. In terms of life lived, the NIL space is just over a year old and a toddling work-in-progress, but many feel this has been a long time coming. After all, to profit from publicity is an existing right every ordinary citizen has, but one the NCAA didn’t previously allow.

It’s not quite as garish as Patrick Mahomes bantering with “Jake from State Farm” or Tom Brady hawking Hertz car rentals. NIL looks more like fan-favorite Dax Hollifield, beloved Hokie linebacker, partnering with the Blacksburg Farmer’s Market.
“NIL has helped us connect with the community more. I love doing this. I want to work hands-on with any partnership I deal with, that’s what I’m about. That’s what it will always be about, building relationships and trying to make both sides better,” Hollifield offers.

Despite its infancy, the trajectory for NIL is big, it’s lucrative and it’s fast. And it’s allowed for companies like Blacksburg’s Triumph NIL to jump in and shape the opportunistic space for the strategic benefit of not only the athletes, but also the communities that surround them, at school and back in their hometowns.

At its genesis, Triumph NIL was the passion pursuit of Brenden Hill (former Hokie football great and professional brand strategist) in partnership with Jim Cowan (legal), Doug Hicks (sports communications and marketing), Joey Harrington (research and talent operations) and Kevin & Robyn Jones of Joba, the area’s premier marketing, design and communications studio.Kevin Jones, of course, being legendary Hokie running back in the early 2000s and first-round draft pick for the NFL.

The power of a team of people with the Hokie Nation at its foundation, cannot be undersold.
“That’s a credit to Virginia Tech. Ut Prosim [“That We May Serve”] is real,” Hicks states. “It’s about us giving of our experience and knowledge, but also it’s about whether or not the athletes are giving back to the community and passing along something for the next generation of Hokie athletes. There’s a piece of that in everything we do as well.”

Lifted directly from the website: “Triumph works to collaborate with businesses, charitable organizations, and student-athletes to provide meaningful experiences for the greater good of all.” Through what they call “creative activations,” Triumph helps close the gap between student-athlete notoriety and corporation goals by leveraging the attention of an existing, excited and engaged fan base.

Athletes can make money with media and advertising contracts, selling signed merchandise, creating custom merchandise, making personal appearances, starting sports camps or, more philanthropically, being a spokesperson for a non-profit. They are not, however, allowed to get paid for performance and no quid pro quo allowed.

In the short term, athletes are navigating a pivotally busy time, carrying school and family and social responsibilities, all while trying to excel in their sport. Triumph’s involvement allows them to focus on what’s most important by heavy lifting the marketing negotiations and campaign executions. Hicks adds: “It’s not always about the money. It’s about allowing them to be at their best at the things that matter most.”

Long term benefits of NIL will prove invaluable as student-athletes make the transition into the professional sect, either as a player, or as an employee. “We’re helping them build not only a resume, but a personal profile to get a leg up on anything they choose to pursue after their collegiate playing career is done, to help them have some of kind of marketability that makes them a valuable asset to an organization. We’re helping them establish their own small business,” Hicks further explains.

Yet despite all the big business and money talk, it’s still about fostering a connection, bringing those who live next door but shine under Hollywood lights, a little closer to home.

“It’s really cool that fans get to see a side of student-athletes away from the field,” Dax Hollifield concludes. “It used to be they only cared about how you performed on the field, and now we get a voice. We have an opportunity to express how we feel about other topics. They get to know us as a person, not just an athlete. It’s really refreshing.”

The next time you’re out at that go-to college bar after the big game, pontificating the highlights, take a minute to pay attention to the commercials on TV. Your favorite player just might be hawking local Hertz car rentals. Or they may be at a table behind you, signing autographs for your children. Either one would be a pretty cool story.

Nancy S. Moseley is a freelance writer who grew up in Blacksburg reading Hokie headlines in the paper over breakfast before school. Now she can be seen hanging around English Field waiting to get her picture with a baseball player. Any of them will do, really.