2 months ago
“Geared Up” 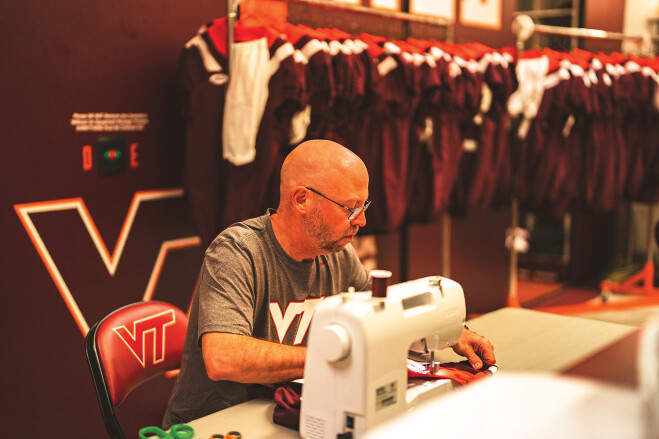 Have you ever had that nightmare where you’re back in grade school, and it’s the day of the big game, and you show up to the field without your mouth guard? Or you forgot your cleats? Or worse, you’re wearing the wrong color jersey! If only there had been someone (besides Mom, of course) looking out for the players, to prevent these anxiety-inducing situations.
Luckily, the Virginia Tech football team has Director of Football Equipment Services Stewart Carter at their service. He has been involved in ordering, inventory and maintenance of every single item of football equipment and attire more than three decades before coming here less than a year ago. Aside from the 120 players on the team, Stewart also outfits the trainers and staff — including student staff – bringing the total number of people relying on him to 200 or so.
“We have backups for our backups,” Stewart remarks on the extensive inventory. “Every piece of equipment is itemized, and every item of clothing is labeled with a heat press or label maker.” The team puts in orders with Nike a year in advance. When you’re dealing with more than 100,000 pieces of inventory, you can never be too prepared.
Hailing from Georgia Tech, Stewart was an offensive lineman in high school and vowed to remain part of football culture any way that he could. He was the head student equipment manager during the 1990 championship, when the Yellow Jackets won the national title. “It is a feeling like none other, to be a part of something so much bigger than yourself,” he expresses.
After five seasons at Georgia Tech, Stewart went to Fresno State in California, where he met his wife, then made his way back to Georgia Southern, where he met Coach Pry. The two spawned a close friendship over their shared love of The Allman Brothers Band.
“When Coach Pry invited me to work for him at Penn State, we packed our bags, though I never thought I’d live north of the Mason-Dixon line!” he laughs. All the more reason Stewart was eager to head down to Virginia Tech and follow Coach Pry once again. When it comes to game day attire, the Hokies are known for having an extensive wardrobe.
“Building relationships with the players and new staff members that I have been blessed to meet is my favorite part of the job,” he relates. “Introducing the guys to a new piece of gear that can better protect them now and keep them healthier for longer, whether it is a new helmet or pair of cleats, is vital to their success and the success of the program.”
The Hokies have SIX industrial washing machines for all their laundry. Each machine is about four times the size of a standard household washer, and everything gets washed after every use. Stewart’s attention to detail is exceptional. “We want to be sure that everyone supporting our student athletes exudes professionalism, both on and off the field. Whether it is our trainers, nutrition department, strength interns, sports science interns, recruiting interns and others, we want to ensure we convey a unified presence.”
And with that presence comes a very real power. Under the right conditions, you can spot Lane Stadium from 25 miles away — the tell-tale sea of orange and maroon on Hokie game day — all the way from the top of Bald Knob Mountain in Newport, west of town in Giles County.

Emily Kathleen Alberts distinctly remembers pressing her tongue under her upper lip to fool the refs into thinking she had a mouthguard in during her high school field hockey days.