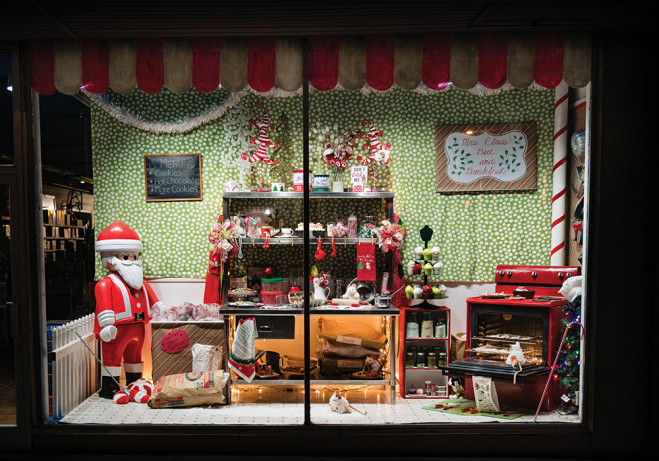 When asked if she has ever been to see the storied holiday windows in New York City, self-proclaimed toy lady Paula Bolte beams: “That’s on my bucket list!”
Bolte, the owner of Imaginations Toy & Furniture on South Main Street in Blacksburg for 22 years, hasn’t let the lack of big city inspiration stop her from creating her own wonderland windows over the years.
The tradition of a holiday display started out very simple around 10 years ago. But thanks to a handful of particularly creative employees, bigger ideas started swirling, and the excitement of how fun it would be to up the ante took over. Every year employees gather at the store the Sunday after Halloween to build the anticipated display under the guise of a paper-covered window. The theme is kept secret until the big reveal, which is typically a Friday in early November.
The reveal evening is open to the public and starts with cookies and hot chocolate inside the store, then everyone heads outside for the climactic moment. Kids sit along the bottom of the window while Bolte climbs a ladder, initiates a countdown and pulls the paper away. The effect is enchanting. It’s exactly what Bolte was seeking when she incepted a party to celebrate the unveiling. “It’s probably my favorite two minutes of the entire season. I almost always cry,” she states.
Bolte initially thought all items in the display needed to be products for sale inside the store. Once she realized it wasn’t necessary to sell everything, the possibilities for more whimsical windows opened up. The little white mice were the only items for sale in 2018’s holiday scene [which are the photos accompanying this article].
The floor-to-ceiling size of the space allows for a life-size imagination to be realized. In years past, there has been a giant advent calendar made out of boxes and even a full-size igloo. Yet there are almost always special trinkets hidden down on a child’s level awaiting discovery.
The budget is small, what you might imagine for a mom-n-pop business. Repurposed items are used as much as possible. The oven in these photos was actually tucked away in Bolte’s home waiting to be recycled when it found new life in Mrs. Claus’s kitchen after being spray-painted red.
Since the holiday display takes so much effort, they try to stretch out its relevance as long as possible. Last year’s Christmas bakery theme, after a quick color switch from red to pink, became a Valentine’s bakery offering heart-shaped cookies. Subsequent displays change seasonally or if there is a particularly compelling current event, like the 50th anniversary of the Apollo 11 moon mission last July. But everyone is usually brainstorming concepts for Christmas year-round.
“It has nothing to do with actually selling anything,” Bolte admits. “The holiday display and the reveal party are really about community.” And isn’t that what the season is precisely about? It’s significantly more powerful to sell nostalgia, to market magic, to advertise emotion. The ‘oohs’ and ‘ahhs’ from wide-eyed children are a way richer currency to bank on. It’s a brief snapshot of time in a hurried holiday season. Cherish the opportunity to let the wave of warmth and togetherness wash over you and forget about buying things, for just a moment.