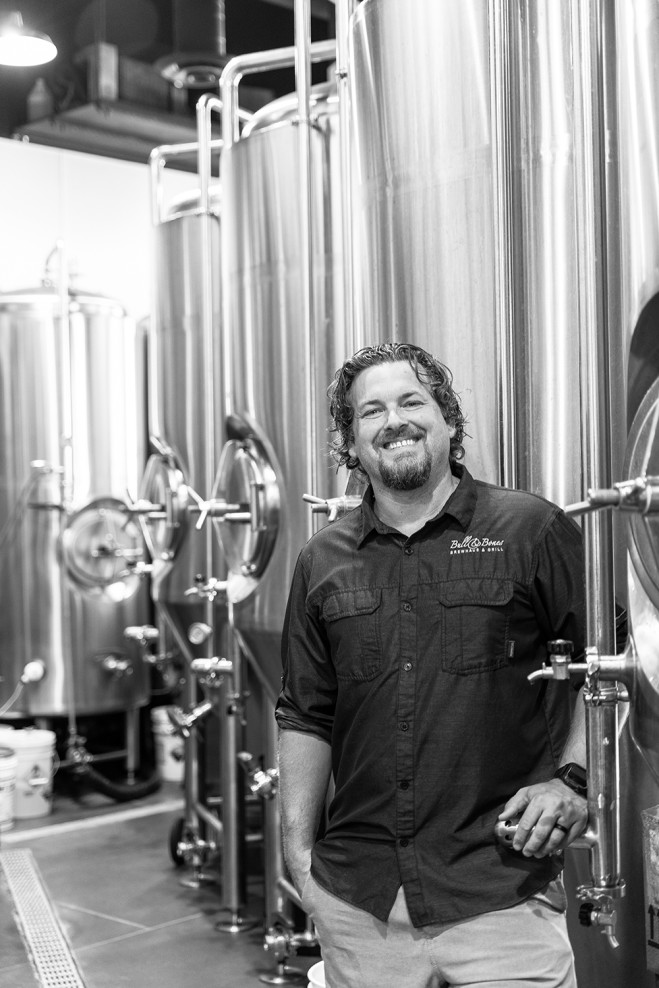 As a medical device rep, Jon Coburn traveled all over the United States. “I would visit breweries and eat in awesome restaurants, places where young professionals would hang out. When I wanted to take a physician out for a meal around here, I would drive to Roanoke. We had little that wasn’t a chain or a college bar, nothing like this,” Coburn relates, gesturing around his restaurant, Blacksburg’s Bull & Bones Brewhaus at First & Main.
Coburn graduated with advanced degrees from West Virginia University in 2000 and moved to Blacksburg shortly thereafter. On his decision to try opening a restaurant, he states: “There was definitely a market need. And it doesn’t hurt to also love beer and BBQ.”
Coburn worked as a server and bartender in college, so he was intimately familiar with, and enjoyed, the industry. Bull & Bones opened in 2008, but he continued to rep medical devices for four years. After all, Blacksburg is a transient environment, food service is a volatile industry, and it was a challenging economic time. “It’s hard to scare me now,” he chuckles.
The layout, initially sketched out on a napkin, is a tribute to some of his favorite places across the country. The frost rail was inspired by Henry’s Tavern in Portland, Ore. And a brewery in Michigan gave him the idea to place the bar in the middle to feed both the restaurant and the pool hall with energy.
Bull & Bones was the first brewery in a two-hour radius. It was the first high-end pool hall. It was the first local restaurant to have a smoker and a wood-fired grill. Coburn is a charter member of the Virginia Brewer’s Guild. He is also the first in the Commonwealth to sell CBD infusions, thanks to the Floyd Hemp Factory that he co-owns with Ryan Turman and Chad Quesenberry.
This year Coburn also acquired The Black Hen in downtown Blacksburg and opened a second Bull & Bones location in Christiansburg. He is part owner of Kairos, an outdoor recreation mecca on the border of Virginia and West Virginia, and he and his family live at Canterbury Farms, a horse boarding and training facility, an additional endeavor. He is currently exploring Roanoke, Salem, Wytheville or Giles for another Bull & Bones location.
“You have to have good people whom you can trust and then know how to delegate and get out of their way.” Coburn is extremely proud of the work family he has gathered. “I’m proud of my people, of watching them develop and grow personally.” And, when your office is essentially a bar, you must be doing something right.