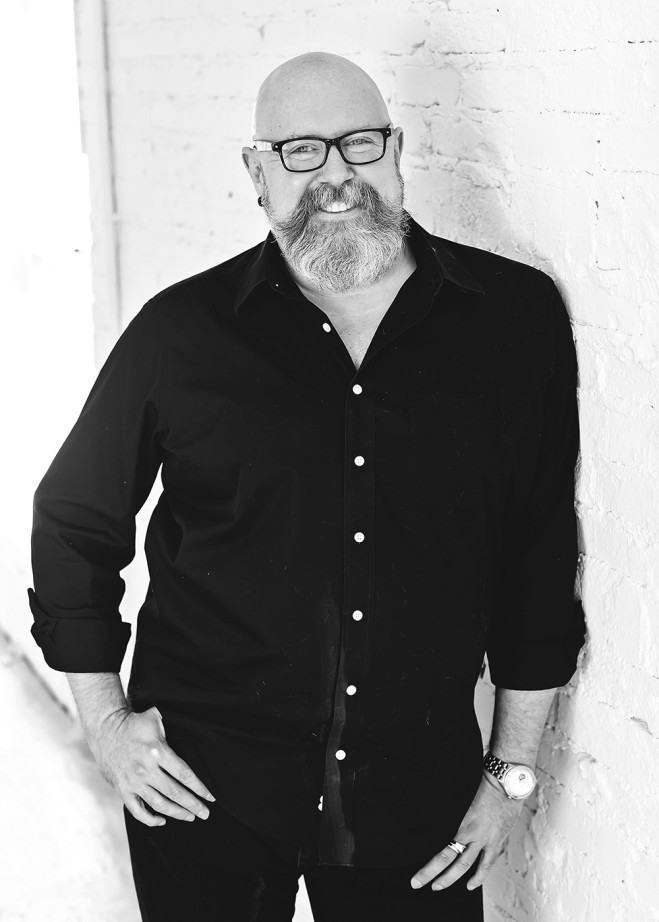 The path to owning a hair salon wasn’t an obvious one for Kevin Meredith of Meredith’s Salon in Christiansburg. After graduating from Radford High School and dabbling in the “real” working world, Meredith decided to go to cosmetology school.
“I cut one of my roommates hair once and he said, ‘You should be a hairdresser.’ As it turns out, I was pretty good at it,” Meredith laughs, thinking back.
He spent the next several years working for two different local salons. When he reached a plateau of creative contribution, it was time to figure out what’s next. Meredith, with the support of co-owner Jim Kinion, opened his own salon in 2007. Meredith knew his strengths did not lie in business management, so Kinion handled the business end of the business and Meredith stayed “behind the chair” working directly with stylists and customers.
In his downtime, Meredith likes to draw, paint, sew and hand embroider. But what fuels him is the interaction and connection with people. His joy lies in making clients happy. “You’re not just doing hair. We build and maintain healthy egos. People come to us for a lot more than just a trim. They’re choosing to come to us so we honor that by giving them the best service we can possibly can,” Meredith offers.
Meredith cites Kinion and his salon manager, Stephanie Rockafellow, for the sustained success of the business. While Meredith is quick to emphasize his strengths do not lie in the numbers, Rockafellow defends him: “But it takes a smart businessperson to know his strong suit and the ability to choose the right people to trust with the other responsibilities,” which is exactly what Meredith has done.
A combination of self-awareness and even self-doubt is paramount to the success of a business, Meredith feels. “Doubt makes you stop and check in to make sure things are still moving in the direction you want them to. If you’re not periodically questioning what you’re doing, you may not be paying enough attention.”
Following a childhood passion, Meredith is scheduled to complete a bachelor’s degree in fashion from Radford University in 2021. It says a lot about the integrity of a business and the dedication of its team members when the namesake stylist is able to step away and nary a beat is missed. “We all support him 100%,” Rockafellow declares. It’s imperative to always bring in new information, Meredith feels; it’s ultimately what propels you forward.