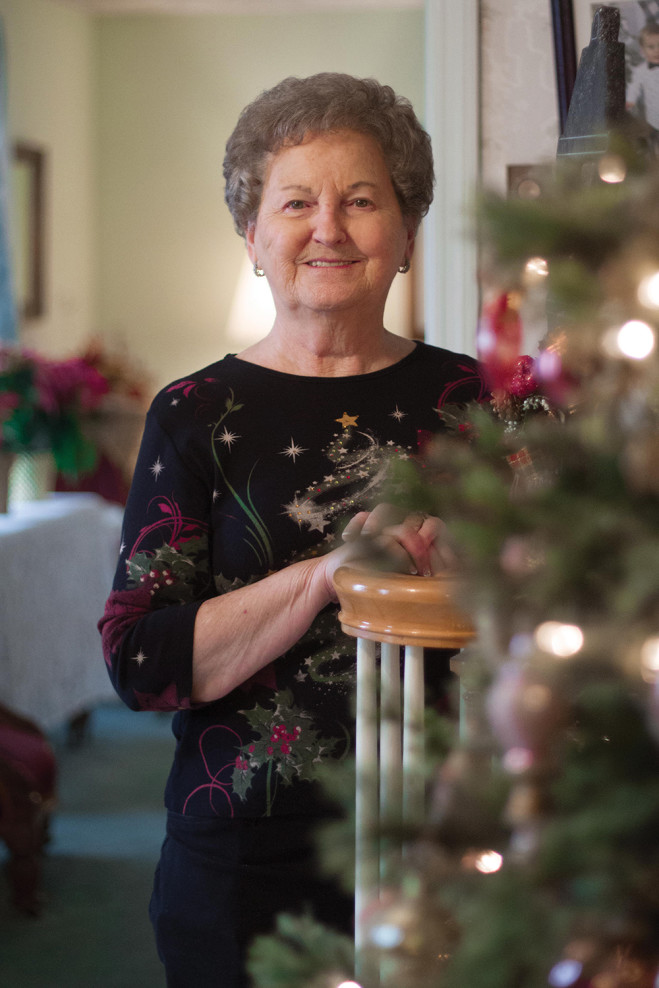 Like most serious Christmas decorators, Nancy Wilmina Alexander begins placing out her Christmas collection the day after Thanksgiving. Her daughter, Kay, always comes from North Carolina to assist, and together they lovingly unwrap special ornaments, angels, Santas and manger scenes collected or received across decades. Her late sister Clara started giving her Hallmark Santas about 30 years ago, so handling each one of those gives Mrs. Alexander a sweet, emotional walk down memory lane. She has received many White House ornaments from her sister, June.
She is a personal fan of Jim Shore, a South Carolina artist known for Heartwood CreekTM and Disney TraditionsTM, along with other interesting art pieces. Shore is “the son of artistic parents who instilled a love of American folk art. His grandmother was a master quilter who taught him the patience and skill to bring intricate designs to life.” [jimshore.com] This most likely explains the pretty quilts in one of the manger scenes.
The charming ceramic pots holding poinsettias on each step of the staircase are also used to decorate a church holiday dinner and other functions where Mrs. Alexander is involved in lending her Christmas touch. “These have been very well-used since I bought them in a dollar store years ago,” she relates. The larger Christmas tree graces the foyer nestled in the curve of the stairway, and a second smaller tree stands in the family room.
Mrs. Alexander and her husband, Kenneth Alexander Jr., are both natives of Pulaski County and occasionally wonder why they built such a big house when they were 25 years old and had been married four years. They have marked 58 years of marriage, raised three kids here and have six grandchildren and two great-grandchildren. The 500-acre cattle farm property has been in the family three generations, and there is now a Kenneth Alexander III and Kenneth Alexander IV.
A two-car garage is housed on one end of their 2-story, brick colonial home. They built an apartment for his parents on the other end, never expecting that the apartment would work for his parents, an aunt, a friend dying of cancer, a granddaughter and great-granddaughter, then another family member. Mrs. Alexander is gifted with her Christmas decorating, but has risen to her higher calling as a caregiver in ways she never expected when they added the apartment. Her personality exudes a gentle warmth, and her home is inviting throughout the holiday season and, we suspect, all the rest of the year.