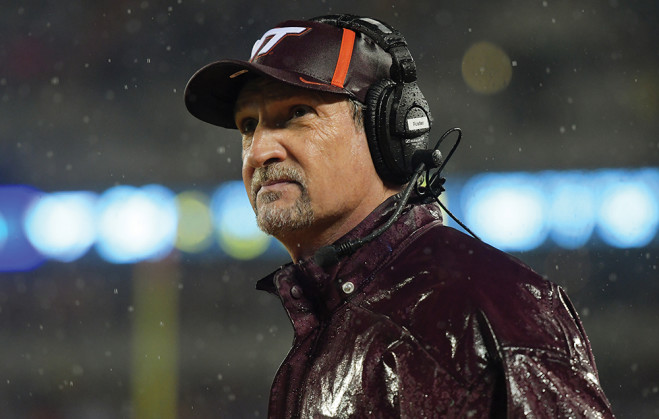 It’s his 32nd season coaching Virginia Tech football, and Bud Foster says there is only one thing missing from his storybook career: A “three-finger” national championship ring. “I want that gaudy piece of jewelry after everything we built here. I’ve wanted that for a long time.” In fact, he wanted it for Frank [Beamer], his long-time coaching mentor and friend. “I coached with Frank his 29 years at Virginia Tech, plus six years at Murray State. He had the most impact on me outside of my family,” Foster relates.
When Beamer retired in 2015, Foster wanted the job. “I did want to be Head Coach, but [VT Athletic Director] Whitt [Babcock] was transparent in the direction he wanted to go. I was disappointed, but I’m not naïve. I saw that people wanted a change, and although I’m a proactive guy, some may have thought I was part of the status quo.”
If discipline, hard work, focus and repetition is a formula for building a program ready to win a national title, then Coach Foster has laid that groundwork. He is the longest tenured coach in the country who has stayed in one program. Remaining committed to the Hokies in spite of not getting his dream job is a testament to this man’s character. And he is arguably the best defensive coach in all of college football with the wins, bowl rings, accolades and awards to prove it.
Foster’s legacy is equally impressive off the field, which starts with his outlook in life and what he wants to be remembered for. “My dad taught me to treat people the way I want to be treated and commit my life to something. I am fortunate to have a great family and friends who let me live my dreams,” he says. “I want people to think: ‘We saw what he was like on the field, and off the field he was a genuine guy — a caring, approachable guy who had other people’s best interests at heart.’”
Foster describes himself as approachable but guarded. “You’re in the people business in athletics. I have a core that I keep close, but I also have a lot of acquaintances,” he says. “This town is so tight-knit that people can put coaches on pedestals. In other towns, you can go out and people won’t know who you are.” But everyone knows Bud Foster. When he goes into Texas Roadhouse on Thursday nights with his family, a table is waiting. In the Hyatt Place lobby area, the bartender pours the “Bud Foster” concoction of a double shot of Tito’s vodka, a splash of cranberry juice, apple juice and club soda served in a pint when he walks through the door.
His schedule is grueling – most days he works from 7 a.m. to midnight or later, six days a week. “Everyone sees what we do on the field on a Saturday, but people don’t see what we do Sunday through Friday to get there,” he says. But everyone needs a break. Besides relaxing at his Claytor Lake home, one of Foster’s favorite getaways is Costa Rica. He knows the locals in Tamarindo, a popular beach town on the west coast. He even has a tattoo of Costa Rica’s slogan, “Pura Vida” – the pure life – on his right forearm.
Foster is not only working hard to build a winning football program, but also he is shaping men’s lives. “There is nothing more gratifying than a former player telling me that I helped him be the man he is today. I love these players. I really care about them.”
And what does he think it’ll take to get a national title? He smiles and relates that some of the concepts he teaches on the field that also apply in life. “The biggest skill set that one can develop is to have the focus, concentration and discipline to perform at the highest level at every play, one play at a time. It’s all about the journey. And we are going to get there.” 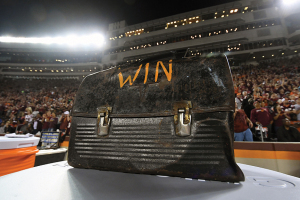 Besides his consistency, Foster has also built a brand: The Lunch Pail Defense. When was around 12, his dad moved the family about 40 minutes outside St. Louis. “It was like moving back in time,” he remembers. “It was a farming and coal mining community – blue collar, hardworking area. That’s where the push of the lunch pail came in. I would see people showing up to their jobs, ready to work every day. And that is the concept I wanted to build in our football program – to be known for outworking our opponent, out-preparing and being the best we can be.”

• On one side, painted in black, is the word WIN – an acronym for “What’s Important Now”
• In the huddle, the football players break on the declaration: “WIN”
• The other side has the word TEAM – Together Everyone Achieves More
• The original lunch pail was a gift from Rod Sharpless’ mother-in-law from New Jersey and now is in the memorabilia room in Lane Stadium
• A replica is in the College Football Hall of Fame in Atlanta
• Bud Foster has WIN tattooed across his back

Foster’s care for the community is evident in his founding the Lunch Pail Defense (LPD) Foundation. It provides scholarships to high school students in the New River and Roanoke region who want to pursue higher education. “There are some shining stars who just need some help; kids who work hard and need a break. I really hoped the business community would get involved,” Foster explains. “Blacksburg’s Campus Emporium was the first to jump on board, selling trademarked lunch pail tee shirts. We got off the ground with those proceeds.”
The non-profit has awarded more than 25 scholarships totaling $110,000. Local business sponsors include Farm Bureau Insurance and the Hyatt Place. Foster’s all volunteer team coordinates fundraising dinners and events with private donors who help to make these scholarships possible.
The LPD Foundation also gives money to the Organ Transplant Support program in conjunction with Duke University Medical Center to provide financial assistance for lodging, transportation and child care to families of those undergoing organ transplants.

Krisha Chachra served eight years on the Blacksburg Town Council and has written for NRV Magazine for a decade. Krisha is a community advocate & connector and runs an event production organization that hosts Up on the Roof. She writes the travel column for the magazine and occasional human-interest pieces. Email her at kchachra@aol.com