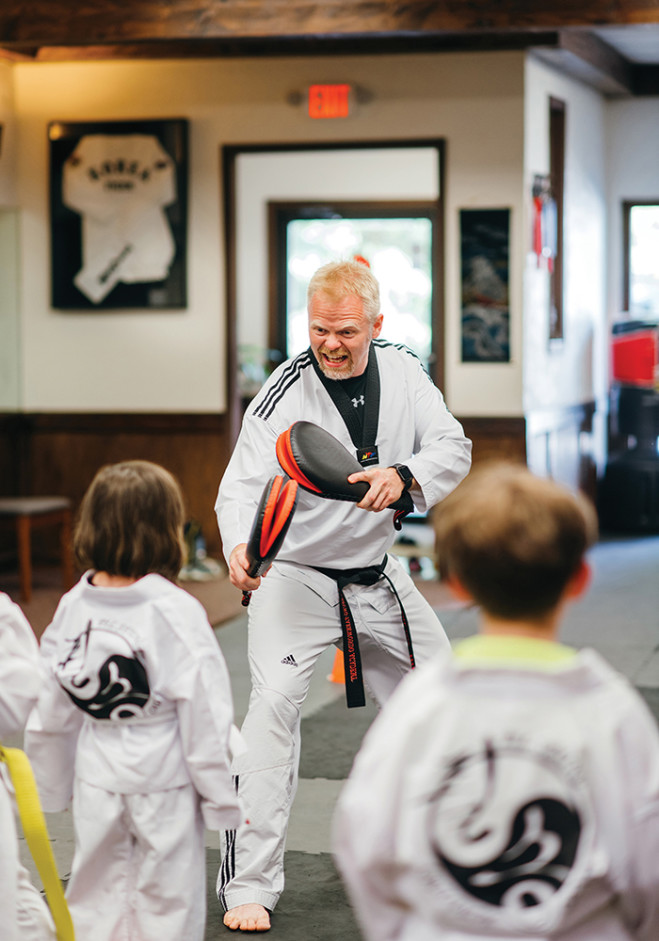 He’s a farmer, a friend, a teacher, a dad, entrepreneur, husband, son and more. For Rupert Cox, the lines blur between his jobs and responsibilities. He takes martial arts and agricultural angles into the school classroom, and brings math into farming, problem solving into business and creative thinking to 8th grade students at Blacksburg Middle School and kids and adults alike at his business, Pil Seung Tae Kwon Do. Born in El Paso, Texas, Cox came to southwest Virginia when he was 8 and to Virginia Tech about a decade later.
“When I was a junior at Grayson County High School, my dad became the auto mechanics teacher. Seeing him work and connect with the kids, some of them kind of rough and tough, may have driven me to consider teaching,” he says. He enrolled, however, first in engineering. “I found out quickly that I much preferred math, so I majored in that with a minor in education.” Cox was hired right out of college by Blacksburg Middle School, where he has worked for 13 years. He’s seen a lot of changes. “The kids’ focus has declined because of the increasing use of technology and video games.” He observes students looking down at their phones, despite the school rule that cell phones be left in lockers unless a teacher gives permission to bring them to class. “When I ask them to bring out their cell phones and put them face down in front of them, I get more of their attention.”
Teaching presents a different problem every day, and Cox embraces that. “With engineering, I saw a predictability in the same kind of problems cropping up on a regular basis. In teaching, there’s no lesson plan that works the same way twice. I can’t present the same problem solving methods to every kid. I love encountering problems and thinking through the best approach, especially for kids who hate math.” In his challenges to reach 8th graders who don’t find math especially interesting or easy, Cox brings fun stuff into the classroom. “It’s not too far to jump from martial arts to math.” He’s introduced 3D printing, drones, precision and discipline of tae kwon do and aspects of farming life.
For example, he’ll break a board in a martial arts move, then talk about the particulars of force, and the students get excited. He might introduce the mathematical factors in designing a chicken coop. Real life scenarios that use math principles give the kids a more tangible view of the value of math and a more intriguing way of learning. Besides graduating from Virginia Tech, Cox holds special certification to teach algebra.
In his second semester in college, Cox’s best friend, Billy Turner, got involved in martial arts and invited him along. “Billy and I wrestled in high school, so I started and never stopped. I did not plan to have a business, but when my original master left the area and Billy joined the U.S. Army, I was the highest ranking student. Everyone turned to me to teach, so I carried on.” Cox beams with pride that during these past dozen years his good buddy Billy served in the Army’s esteemed Special Forces and just graduated from Virginia College of Osteopathic Medicine (VCOM).
From 2006 to 2013, Pil Seung rented gym space from Blacksburg Parks and Rec. “When I faced 45 students in 2013, I knew we needed a larger space.” The Town was responsible for collecting the class fees, and Cox received a percentage. All those years, he put his share into buying equipment. “We started with two kicking pads and a few worn out mats,” he recalls. By the time he was ready to rent his own place, he had adequate gear to set up everything and never has had any business loan or debt. Credit his math acumen – and a boatload of common sense.
Cox resides in Giles County for its reasonable cost of living, and he and his wife, Jessica Midkiff, strive to raise most all of their food. “None of what I do would be possible without my wife,” he emphasizes. They have two children and manage cows, pigs, horses, chickens and gardens. The farm and home life keep him in chores and family fun when he’s not teaching, rebuilding his dump truck, fixing fences or running the martial arts business. In every endeavor, Rupert Cox strives to live out the five tenets he posts, as he encourages others to do the same.

In a rare moment, I watched 12 children, ages 5 to 9, sit criss-cross applesauce, silent and still for 3 minutes. No entertainment, no screens, no wiggles, no giggling. What a reflection of the respect they have for their Taekwondo instructor, Master Rupert. His direct and personal style of teaching builds respect and trust. He knows his students’ names, strengths and struggles, and he encourages each one to persevere in class and outside.
~ Parent Kristie Fleming

Summer camp days were filled with workouts building strength and endurance, practicing forms and kicks, and a lunch time of enrichment with chess games, a 3D plastic printer and sheer fun. There were visits to the aquatic center and a local trampoline park. I came home tired in mind and body proudly wearing my camp tee shirt which reads: “It doesn’t get easier, you just get stronger!”
~ Student Amber Fleming, 11