4 years ago
A Clear Business Model 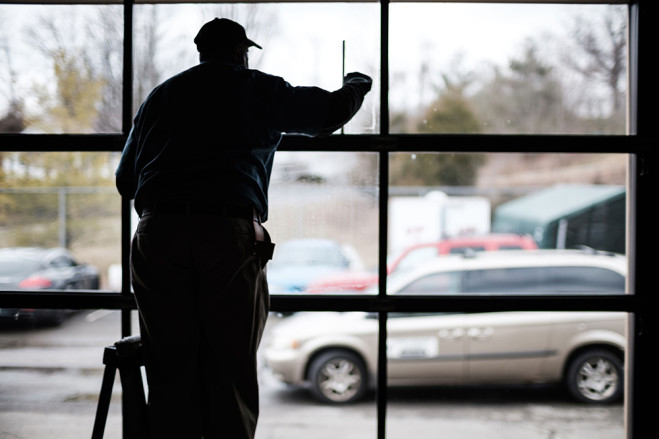 Somehow the declaration against windows became a joke in the world of cleaning. But what is a man who does do windows allowed to claim he doesn’t do? “I don’t do malls,” Ron Eaves, sole proprietor of Ron’s Window Cleaning, says with a hint of humor underneath a straight face.
Eaves, born in 1949, grew up in the Wake Forest area of Blacksburg, went to the Christiansburg Institute until it closed in 1966 and transferred to Blacksburg High School. His father was killed in the McCoy coal mines when Eaves was 6 years old. His mother, who worked at the nearby Radford Arsenal, and his maternal uncle, raised him. Eaves has two grown sons and two grown stepdaughters who live nearby.
In his early 20s, Eaves moved to the D.C. area and was employed as a unionized construction worker for about eight years. When the company went out of business, Eaves followed work arranged by his local lodge. “I got tired of going from job to job. Then a friend of mine said, ‘Ron, do you ever think about cleaning windows?’”
With the promise of steady work, Eaves took a job with Virginia Window Cleaners in the Alexandria area which trained him on the trade. He enjoyed a higher salary than the construction work and had benefits. After several years learning the ropes of cleaning windows in Northern Virginia, he moved back to Blacksburg, right back to Wake Forest.
He immediately started to run his own business cleaning windows which was successful at first, but it soon became clear Eaves needed a second income. He went to work for the Montgomery County Public School system as a custodian. “I worked for Montgomery County for 13 years, cleaning schools on second shift and windows in the morning, “ Eaves states. Eventually he was able to officially retire from custodianship and continued to run his business. He smiles and says it keeps his health in good shape.
Eaves’ client base is mostly residential, averaging around 100 houses per year in the New River Valley. When he first started he had commercial clients, but that has dwindled to a handful. Currently he works for South Main Auto, Comfort Inn and the last remaining Wade’s grocery store. He’s cleaned the windows at Main Street Inn in Blacksburg ever since it opened and the expansive Montgomery Regional Hospital entryway once a month for the last 18 years.
“I don’t do jump-offs over the buildings,” Eaves asserts. “Jump-offs” involve repelling, hanging from a rope system and sitting on what’s called a sky genie chair. He motions with his hands how wide the chair is and shakes his head matter-of-factly.
Eaves says a lot of local window cleaners actually don’t want to do houses, so there is a preference for businesses. “It’s harder to do houses. And a lot of people are scared of heights.” In a friendly jab at the competition, he laughs: “If I was scared of heights, why would I being doing this?” In addition to residential and commercial window cleaning, Eaves handles stripping and waxing floors, cleaning gutters and pressure washing. He offers free estimates to those within a reasonable distance.
When he first started his business he advertised once with The Roanoke Times. The ad offered a discount, so he naturally received a lot of responses. Other than a shirt and a truck that say “Ron’s Window Cleaning,” he hasn’t advertised since. Eaves does not increase his rates for repeat customers. Once a rate is quoted, it’s locked in, even if the nature of the job changes. He feels it’s more important that people call him back year after year.
With no sights on retiring any time soon, Eaves plans to continue working as long as he’s able. He does get away to Dallas over Thanksgiving every year. He always goes to a Cowboys game, a fan since childhood. In fact, every Sunday, he gets together with friends over potluck dishes to watch football.
With no major advertising push, Eaves seems to be something of a local best-kept secret. Admittedly, his commendable referral network keeps his plate pretty full. “People come to me and want me to pay them a bunch of money to set up an advertising plan. They say they will guarantee me all of this work. When I say, ‘no,’ they ask, ‘well how are people going find you?’ And I say, ‘well, you found me, other people will to.” Good point. Perhaps the very best marketing tactic is to simply be honest, do a good job, treat customers with respect and the right people will, in fact, find you – unless they work in a mall.

Nancy S. Moseley is a freelance writer who, although spent much of her adolescence in a mall, also tries to avoid them now.