2 years ago
From Truck-to-Table . . . how the food truck trend fuels a sense of community 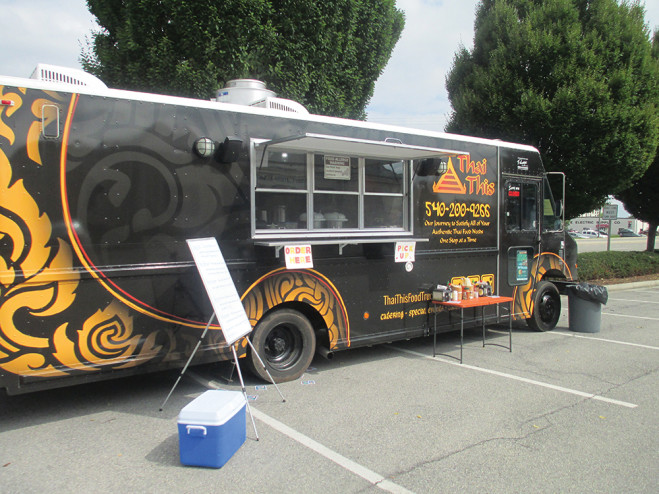 In the late 1600s, New Amsterdam (now New York City) began regulating pushcart vendors that sold food. In 1866, Charles Goodnight invented the Chuck wagon to feed cattlemen traversing the west. In 1936, Oscar Meyer unveiled the first portable hot dog cart, The Weiner Mobile. It was shaped, of course, like a giant hot dog.
Food from a mobile contraption has long been a thing. Maybe it feels a bit indulgent or even a bit renegade to belly up to the open side of a roving restaurant for sustenance, forgoing the commitment of sitting down, ordering and methodically enjoying a meal. To eat on-the-go from something on-the-go is even a little bit romantic. There’s a mutual adoration and respect for the busyness of life.
On the allure of food truck food, Nathaniel Haile of the local Manns Sausage truck offers: “People can see their food being made, so they know it’s fresh. It’s also very fast and convenient.” Haile’s grandfather, Clair Manns and the other Manns brothers had a sausage company in western Pennsylvania. Haile grew up working alongside his grandfather making sausage for family and friends.
Haile, a studied landscape architect, went full time on Manns Sausage about a year ago. “Having a food truck,” as opposed to a brick and mortar restaurant, “is a great way to promote your brand locally,” he states. With ultimate goals of national distribution, Haile cites those summers on the farm making sausage for neighbors for the passion that, literally, drives his business.
Running a food truck is an intimate experience, not just because of physical space, but also because of the proximity of cooker to diner. There is a rare opportunity for the chef to share stories and develop a closeness with the customer. And vice versa. It’s exactly what Haile started out doing, making quality food for friends and family.
It’s a misnomer to think that fast food is the antithesis of good food. Maybe that’s also the thing with food trucks. Truck operators are generally in business because they are passionate about one type of cuisine. Whether that’s a family recipe, in Haile’s case, a cultural specialty or even just a skill honed from the love of a certain food. When you hyper-tailor your product down to just a few specialties, it’s going to be tasty.
The trend has been soaring across the United States since the late 2000s, and here in the New River Valley, it’s not hard to spot a food truck or two around town. Tacos El Tio and Tacqueria El Paso are options around the New River Valley Mall. Fat Bean Taco trucks out of Floyd, and Grumpy Pig Barbeque out of Newport, along with Thai This and Creole That are all local sojourners. The Beast Pizza of Blacksburg recently set up shop on Peppers Ferry Road. Dogtown Roadhouse out of Floyd transports a brick oven in its truck [license plate OVEN 2GO], setting up the food assembly right next to it.
With the number of food trucks on the road, it was only a matter of time before they started running into each other (figuratively) at festivals and parades. One of the earliest formal gatherings of food trucks occurred in Los Angeles in early 2010 at the first LA Food Fest. Today, a quick Google search will pull up food truck rodeos (interchangeable with ‘rally’) happening pretty much everywhere. In March 2014, Tampa, Fla., set a record by hosting a rally with 121 trucks.
In Portland, Ore., there’s a permanent Food Truck Village, a hip twist on the average city’s restaurant row. The village has become both place of purpose for locals and a destination hot spot for tourists.
The New River Valley hopped on the bandwagon with annual food truck rodeos in downtown Christiansburg and Bisset Park in Radford. And every week from April through October, The Virginia Tech Corporate Research Center hosts Food Truck Thursdays. Deb Cooney of the Radford Visitor Center states: “People like that they can sample a variety of different foods without the commitment of one entree at a restaurant. You can have smaller portions of a couple different kinds of foods.” Last year Bisset Park’s Rollin’ on the River Food Truck Rodeo had around 20 trucks and more than 9,000 attendees. Downtown Christiansburg’s rodeo has been going strong for six years.
“When the weather is nice and people are out, business is going to be great,” Haile says. When you have quality food, some live music and flowing adult beverages, the party vibe follows. The energy is high, especially for the chefs and cooks, who may crank out dishes at a non-stop pace for hours. And when the food runs out, that’s it. There’s a finite amount of space to store back-up.
Having a favorite food truck is not unlike having a favorite band. When they move around, you tend to follow them. You check on where they are and where they plan to be; a food truck groupie, so-to-speak. When multiple food trucks gather, folks relish the opportunity to show up and support their pick. It’s the one chance when your first time at the rodeo is actually seen as a good thing.

Nancy S. Moseley is a freelance writer who regularly indulged in “street meat” for lunch when she lived in New York City.