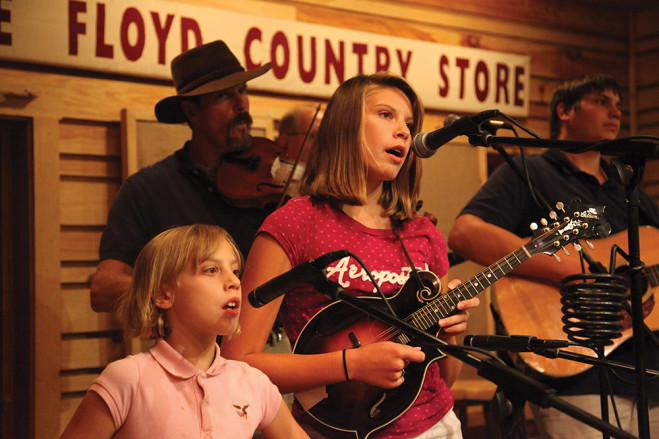 We’ve all driven by the green and orange signs with the iconic banjo. Virginia’s Heritage Music Trail, designated as such by the Virginia General Assembly, is a 330-mile driving route that winds across 19 counties in the southwest region of the Commonwealth. It connects nine major venues and more than 60 affiliate locations. If you’ve seen the signs, then welcome(!), you’re on the right crooked road.
Todd Christensen, a career community developer and the late Joe Wilson, a renowned folklorist and former executive director of the National Council for Traditional Arts, conceived the idea in the early 2000s when the two met at a creative economy conference in Asheville, N.C.
They sought to answer the question: What did the communities in southwest Virginia have in common that could unite them in purpose? The answer, something that tends to unite us all actually: music. Several culturally and historically significant music venues dot the region as well.
Christensen’s and Wilson’s concept was to connect the venues via a somewhat arbitrary driving route and give it a recognizable brand. If marketed correctly, the campaign would not only draw people to one venue, but also increase traffic to other nearby places of interest, all while maintaining a foundational commitment to give traditional artists a stage.
The nine major venues of The Crooked Road are:
• Birthplace of Country Music
• Blue Ridge Institute and Museum
• Blue Ridge Music Center
• Carter Family Fold
• Country Cabin II
• Floyd Country Store and County Sales
• Old Fiddlers Convention and
Rex Theater
• Ralph Stanley Museum
• Southwest Virginia Cultural
Center and Marketplace.

The Crooked Road is regaled for its grassroots way of celebrating the mountain culture and regional heritage of southwest Virginia’s people.
“It’s a creature and invention from southwest Virginia. It belongs to the people and communities. Localities feel an ownership of it,” offers Jack Hinshelwood, executive director of The Crooked Road.
Soon the organization started brainstorming a way to showcase the entire Crooked Road region at once. Having disparate festivals throughout the year would be a burdensome undertaking requiring an excessive amount of time and money. Having one annual festival with localized events allowed every community to highlight its own heritage music, culture, legacies and special traditions. And so the Mountains of Music Homecoming Festival was born, now in its fifth year.
“There’s a lot to be presented, a lot to celebrate. There’s such a great culture here to experience. Certainly not just for first-time visitors, but for residents just as much. The festival is a tool for economic development using the Crooked Road as a footprint,” Hinshelwood states.
The word “homecoming” is used to commemorate a time in the 1900s when many people left rural Appalachia for bigger cities and more lucrative opportunities, thus creating a perpetual homecoming for thousands of people. Great care is taken to produce a festival with immersive, authentic experiences, so the feeling of “coming home” for all attendees, local or not, is inevitable. There is an endemic familiarity in the air.
This year’s Mountains of Music Homecoming will be June 7 through 15. On the docket are several notable musical performances, an array of cultural exhibits, food festivals, outdoor adventures, self-guided tours, educational opportunities and basically anything that helps tell the story of the people.
“Think about 19 counties working together! I’ve been so proud of what all the different organizations have been able to accomplish,“ beams Lisa Bleakely, executive director of Montgomery County, Virginia Regional Tourism.
This year there are two main concerts in the New River Valley, both at the Moss Arts Center in Blacksburg: “Remembering Doc: T. Michael Coleman, Jack Lawrence, Jeff Little and Wayne Henderson” and “Cube Dance: Square Dance Cubed.” The Hoorah Cloggers of Blacksburg will perform with caller LP Kelly and Happy Hollow String Band using The Cube’s innovative technology. The next closest concert is at the Floyd Country Store where the Stanley Brothers AllStar Band will perform.
In addition to the top billed concerts, there is also an array of locally produced cultural experiences that can be anything from a history walk to a Ruritan’s pancake breakfast.
“The cultural experiences provide a vetted, sanctioned opportunity to engage with the local culture,” Bleakely adds. Events in the New River Valley include a farm-to-table dinner at Historic Smithfield Plantation, Music on the Lawn at the Christiansburg Library and a guided float down the New River from McCoy Falls to The Palisades, where dinner will be served. Sinkland Farms in Riner will host one of Mountains of Music’s three “Feastivals,” showcasing Appalachia from a culinary perspective.
“If The Crooked Road never did anything else but give the people here an enhanced sense of pride about their music and culture in general, that would be been enough,” Hinshelwood states.
There’s no question about the power of music. It helps authenticate the stories of our past, manage the realities of our present and may even foretell a bit about our future. To get where you’re going, it’s helpful to understand where you’ve been, forever proving that you can, and should, go home again. And more often than not, the crooked road will lead you straight there.

Nancy S. Moseley is a writer who grew up frequently traveling with her family. Every time they pulled in the driveway her mom would announce, “home again, home again, jiggity jig.”