3 years ago
Wine ~ and the End of the World 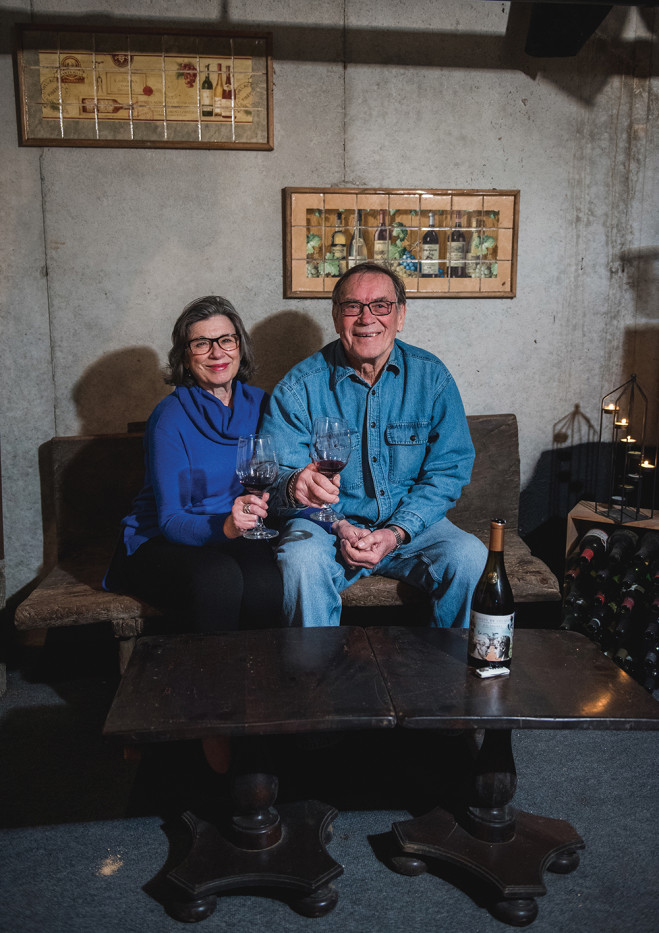 When John and Elena Leshyn moved into their Blacksburg house in 2001, John was intrigued by some vacant space on the other side of a 6-inch thick, concrete, basement wall. There was a rectangular, horizontal window up high, and he could climb a ladder and look. It was open in there under part of the house for access to pipes with compact dirt and very large rocks across from the cellar wall. Clumsy indeed, but if need be, someone could crawl through the window and reach pipes or drop down on the other side, assuming they did not have claustrophobia and did have a way back up to the window.
This unused space kind of played in his mind for a couple years until it struck him: the perfect wine cellar! So, he had someone come in and saw a doorway about six feet high and three feet wide. “That slab of concrete just fell into the vacant space, and there we left it,” he smiles. Guests walk in on this platform and when they run out of bench and chair space in the wine cellar, people sit on it. They added a mildew resistant carpet to the somewhat lumpy floor, then came the shelves, antiques from Spain, bench, coffee table, candles and finally … the wine. In the neighborhood of 150 bottles. In nature’s perfectly climate-controlled 50-60 degrees. “It can get up to 60 in summer and down to 45 in winter,” John points out, “but it’s perfect year-round.” 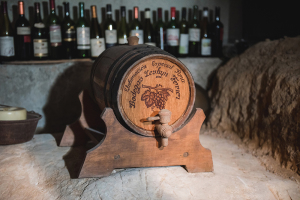 They often sit down there in summer and host wine tastings. In winter, it’s warmer upstairs. As the years have passed, John has glued many empty wine bottles in corners and along shelves of concrete, praising the sticking power of Goop. “The bench at one end is made from one piece of wood and was shipped from Barcelona, in my native Spain,” Elena relates. “Other antiques came from El Rastro, an immense, centuries-old market in Madrid somewhat like our flea markets. There’s some old wood furniture, clay jugs and other old stuff. The word ‘rastro’ can be translated as a trace, a vestige.”
The wine cellar is approximately 15 feet wide, 50 feet long and 10 feet tall with cinderblocks holding up wood planks for shelving, along with other shelves, bricks and stone mulch. It is decorated with bottles and posters, and outside the door, inside the real basement, John illustrates the “porrón”. This is filled with wine, then passed around for all to taste. The vessel never touches anyone’s lips or mouth, and people really good at this can lift it as high as their arm will go and pour into their mouth. Must be the Spanish version of tossing a mini-marshmallow in the air and trying to catch it open-mouthed.
John installed some black fabric on the ceiling and upper walls to keep any dirt specs from falling and to look nicer. The entire interior is concrete, rock and hard pack clay. To say is it enchanting once they pop the cork and light the candles is an understatement.
The gracious couple, who love to entertain, then hosted this writer and the photographer to a very smooth, Spanish, red wine and delicious tapas. “The word ‘tapa’ means lid,” Elena explains. “It started centuries ago when they would put a small plate on top of a wine glass to prevent flies from getting into the wine. The Spaniards, even then, were not much for empty plates, so a slice of ham or small snacks went on the lid.” The source of tapas is widely debated, but the appeal is not, as they have spread all over the U.S. in bars and restaurants, bistros and wineries.
John, who purchases most of their wine from the Vintage Cellar on S. Main St. in Blacksburg, says if he would do anything differently, he would have done it sooner. “If the end of the world comes soon, we’ll be down here enjoying our wine.”