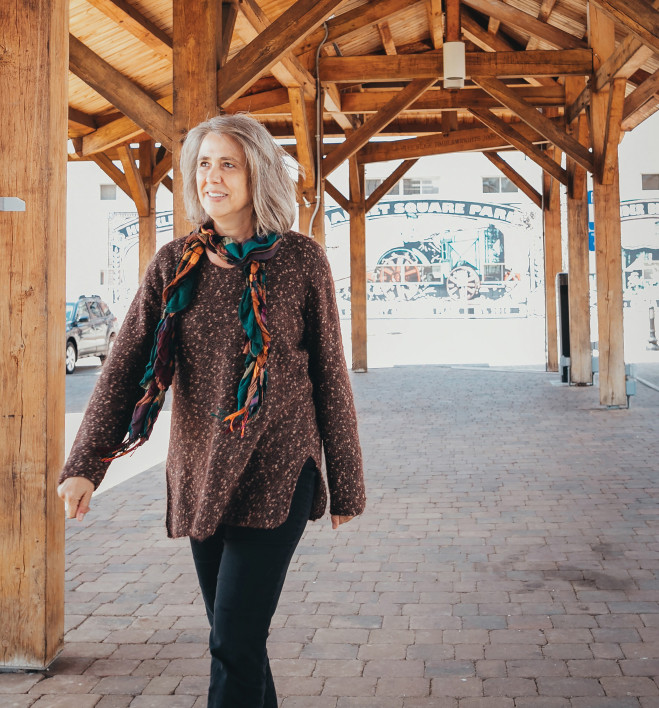 Staying in a job for 10 years must mean there is an affinity between employee and position, which is certainly the case with Laureen Blakemore. She has been the director of Downtown Blacksburg, Inc. (DBI), since 2008, and in a full-time capacity since 2015.
DBI is the association of merchants, property owners and downtown advocates whose mission is to sustain a dynamic, vital and diverse community through marketing, events, economic development and leadership. “My favorite part is getting to meet and work with amazing, interesting people in downtown Blacksburg,” says Blakemore. She adds that she has always been good at organizing things, so planning and coordinating downtown festivals such as Steppin’ Out, Summer Solstice Fest, Art at the Market, the Winter Lights Festival and more appeals to her. Marketing and promoting the small businesses downtown are also good fits as Blakemore is enthusiastic and dedicated to the cause of downtown businesses.
Blakemore was born in New York but moved to England when she was 8 years old, which explains her British accent. Her mother is English, and her father was in the U.S. Air Force. It was in England where she married and started her family. Eventually, the Blakemores moved back to the United States, landing in Syracuse. They decided to do a three-month tour of the country from Canada to Key West to find a place to ultimately settle down. That trip with a 2-year-old, 4-year-old and a tent, was enlightening. The family visited cousins in Blacksburg, fell in love with the town, and set down roots here in 1996.
Her journey to DBI was also roundabout, a term which indicates an indirect journey and is attributed to the United Kingdom in the early 20th century, primarily for large circles in roadways. More roundabouts are being installed in Blacksburg for keeping traffic smoothly moving in place of the stop and go of a traffic light. Blakemore received an associate’s degree in early child care and development from Tile Hill College in Coventry, England. She worked in England in a school for children with disabilities. After moving state-side, her jobs were in day care, community services and the school system.
While she was the volunteer coordinator at the Unitarian Universalist Congregation of the New River Valley, a friend alerted her to Leslie Hager-Smith’s need for an assistant at DBI. When Hager-Smith, the current mayor, left to run for city council, Blakemore stepped into the director’s position. At this point, she was feeling burned out from working with children for so long, and when she learned about the DBI position a “light bulb clicked on.” The moniker of event planning was new to her, but not the concept. She realized that she could get paid for doing something she was good at and loved.
Blakemore considers her biggest accomplishment at DBI bringing more visibility to downtown businesses and growing the festivals. The biggest challenge in her position might be bringing different viewpoints together. “Everyone wants a wonderful downtown,” she relates, “but there are as many ideas on how to accomplish that as there are people in town.” So she focuses on bringing people together toward that common goal and figuring out what will be beneficial to the town as a whole.
Part of her interest in downtown comes from life in England. “In England, I was accustomed to communities where everything happens.” She was surprised at the car culture in the U.S., where people drive everywhere and expect to park right in front of a destination, as opposed to strictly pedestrian downtowns. Blakemore also mentions the language, with differences in meanings to words and the ways they are used. And the food is different. In England, there are more whole, fresh foods with fewer chemicals. She is pleased that the U.S. is starting to lean that way.
In her free time, Blakemore volunteers with The Lyric Theatre and the Montgomery County Christmas Store. She was an original member of the local PanJammers Steel Drum Orchestra, playing bass or lead drums for approximately 10 years and was the auction chair at the Unitarian Universalist church for eight years. Now she takes lessons at New River Irish Dance in – where else – downtown Blacksburg, and she plays the guitar. “I like to try different things. What I lack in talent, I make up for in enthusiasm.”
“Something that people may not know about me which is sort of fun [is that] I am an absolute fanatical ABBA fan [the Swedish pop group founded in 1972].I have even performed as part of an ABBA tribute on several occasions! We lip synced and danced in the full ’80’s costumes!”
Blakemore envisions her future right where she is, with a thriving downtown and bringing even more businesses and bigger festivals to Blacksburg. A sister and her parents followed the Blakemores here, so DBI is often a family affair. The whole crew, including her 27-year-old son who lives in Blacksburg, volunteer at events. She credits her husband with being hugely supportive of her when she has doubted herself, as well as when she spends whole weekends working festivals.

“People need community,” she believes. “And I love to bring people together.” It’s a perfect match from a roundabout journey.