3 years ago
What do we do when a direct link to our past has a questionable future? 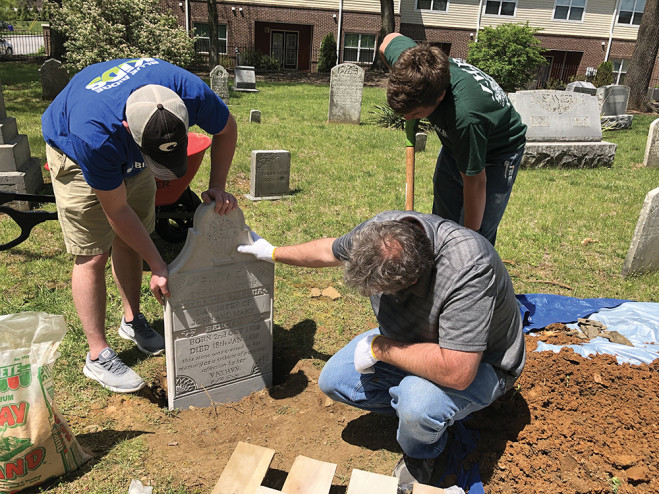 When April Martin Danner set out to locate the graves of Civil War soldiers buried in our area, she kept happening upon something else [literally] hidden in the bushes – several small, family graveyards, roughly 600 actually, all in varying stages of disarray.
“I had an eye-opening realization that hardly any of these small family cemeteries were being taken care of,” states Danner, the programs director for Wilderness Road Regional Museum and museum coordinator for The Raymond F. Ratcliffe Memorial Transportation Museum.
From the time of initial European settlement, the New River Valley was unique for having been the great wagon road. Families that settled here naturally formed cemeteries on their land. When the families moved on to follow jobs and opportunities elsewhere, the cemeteries remained. More families moved in, more dead were buried and so forth. As older generations die off and land is subdivided and sold, the care for these cemeteries falls between the cracks.
Thomas Klatka, an archeologist for the Virginia Department of Historic Resources, offers that most governments consider cemeteries to be church property or spiritual property, not public property. If land is purchased with a cemetery on it, the owners are considered to own the land around the cemetery, but not the cemetery itself. There is no legislation in the Commonwealth of Virginia that requires property owners to take care of cemeteries on their land.
They can be found tucked between frat houses, in the middle of cow fields, behind abandoned houses, and even in the middle of subdivisions. Cemeteries are often perceived for the economic value of the land on which they sit, not in terms of reverential value. History doesn’t outtalk money.
Property owners are, however, required to allow descendants or anyone conducting genealogical or historical research access to the cemetery. But due to private property and trespassing laws, permission from the landowner is required. Sometimes conflict between property owner rights vs. descendant rights results in a custody battle of sorts.
Occasionally conscientious citizens, like Jon Dudding of Blacksburg, choose to adopt the cemeteries themselves. “When I was a kid. we drove by the Barger cemetery on Toms Creek Road on the way to school every day. It was always very overgrown and creepy,” he remembers.
Years later, in 2009, he drove by and noticed the grass was easily two feet tall, so he showed up with some free time and a trimmer to clean up the curious spot he remembered as a child. And then he kept coming back. Buried in the weeds, he has removed stop signs, bicycles, black magic paraphernalia and lots and lots of beer cans. He has facilitated the removal of trees that were endangering neighboring buildings, taken away small brush and welded hinges back on fences. He rakes leaves the day after Thanksgiving, mows every summer and mulches every other spring.
He receives assistance from local companies at low or no cost, most notably Shelton’s Tree Landscape Maintenance and JWB Contractors. A direct descendant, whose grandmother was the latest addition to the cemetery in 1985, periodically sends him a check at Christmas.
“We are a temporary vessel in a forever world, “ Dudding reflects. “A lot of my friends and family wonder why I do this. And I’m not really sure either. I just think it’s my civic duty.”
Cemeteries are great reflections of the spiritual landscape of any given time. Studying graveyards and specifically the headstones – the dates inscribed, design, artwork, construction material – can tell us which religions were prominent and their corresponding traditions. They can shed light on available local resources, mortuary practices, varying cultural definitions of death and afterlife and socioeconomic status.
We can also use cemeteries to glean how social thought has changed. Ironically, the very elements used to study how societies perceived death and burial have fallen prostrate to weather and decades of neglect.
After years of caring for the land itself, Dudding started setting aside money to care for one of the headstones. This past spring he drove the broken, barely legible headstone of Rebecca Virginia Barger to a stonemason company in Indiana to have it recreated. She was seven years old when she died. “I chose her stone for sentimental reasons. She was a little girl who seemed to have lost her name in the world.”
In the tedious re-creation process, it became obvious that matching the original detailing exactly was impossible given modern means. Dudding contacted local art historians affiliated with Virginia Tech to have the cemetery and all the headstones therein, digitally scanned to archive their vintage state.
April Danner also mows several cemeteries on her own and is hoping to recruit enough help to launch a more official group entitled Gatekeepers of the Cemetery Project of Montgomery County. Big change starts with someone who takes the time to not only notice, but also care enough to act. “These touchstones are our history told in small, individual, sacred monuments,” she concludes. “It’s something we need to do out of our own goodness.”

Nancy Moseley is a freelance writer from Blacksburg who helped document the installation of Rebecca Virginia Barger’s new headstone. She was proud to be a tiny part of improving the forever world.