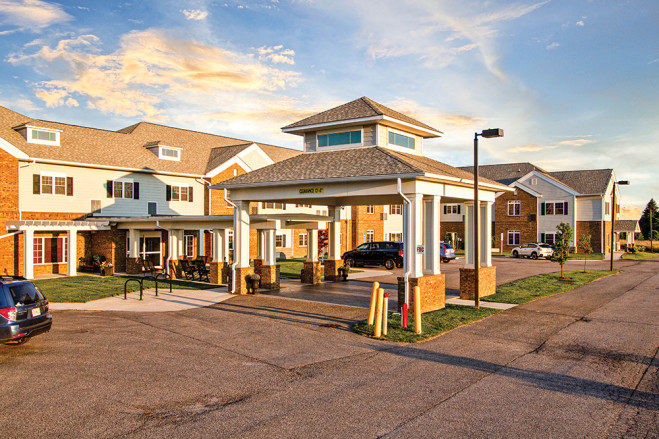 Benjamin Franklin is credited with saying: “In this world, nothing can be said to be certain but death and taxes.” Franklin wrote these words in 1789, when the average life expectancy for women was 62, and for men, mid-40s. Although his bon mot remains true, today’s Americans enjoy a much longer average life expectancy: For women it’s 81, and for men, 76.
One way to meet this expectation has been the development of senior assisted-living “campuses” providing residents with community opportunities such as farmers markets and walking trails, access to services like yard maintenance and meal delivery — plus on-site physical therapy, physicians and skilled nursing care.
Support for this model came in 2018 when the Centers for Medicare and Medicaid Services (CMS) announced payment reform for post-acute care, which includes both skilled nursing facilities (typically part of the continuum of services in assisted living communities) and home health agencies. Senior Housing News notes that this will make senior living campuses attractive as partners to health care systems (like hospitals), which under the new payment models are incentivized to keep patients out of emergency rooms. In addition, CMS announced that the federal program Medicare Advantage will begin to cover some services that were previously not covered, such as non-skilled in-home care.
Mike Williams, founder and CEO of English Meadows, states that the expansion of Medicare Advantage did not play a role in their decision to add a Blacksburg campus (formerly The Crossings), but notes: “This will be an amazing thing for both residents and senior living providers. The federal government is finally realizing the need to help pay for senior living. Imagine if the average monthly bill for senior living could be cut in half for families. It’s coming.”
Williams also states that the under-occupancy trend reported by the national organization Health Dimensions Group (HDG) has evened out in the New River Valley. “For the last five years, new communities opened left and right. Supply rose way too quickly. We were on both sides of that. Our occupancy dropped at several campuses, but two of our places were part of that new inventory. Things have evened out now. However, my belief is that there are still not enough communities to deal with the demand that we will see in the next five to 10 years.”
Given that we’re in the early years of the aging baby boomer population, this belief seems well-grounded — and the exceptional quality of the senior assisted living places in the NRV underscores the likelihood that this sector of our communities will continue to grow.
Warm Hearth Village is a nonprofit in Blacksburg established in 1974 by Wybe and Marietje Kroontje, who immigrated here after World War II. Their initial concept still guides Warm Hearth: “… a person-centered approach to aging in an inclusive environment that redefines retirement.” Housing options range from Woods Edge, an active adult (55 years old and up) neighborhood with a traditional layout to skilled nursing care. And as the unavoidable process of aging progresses, residents are given priority admission to the next level of care. Warm Hearth is certified as a “dementia-friendly” business by Dementia Friends USA which indicates that staff has been trained in how best to serve those with dementia and memory challenges.
Williams started English Meadows after growing up with senior living. “My grandmother and my father owned and operated communities in Roanoke. By the time I graduated from Radford University, I had worked every role inside a senior living building. Waking each morning, with a true mission to serve others, is a wonderful thing.” There are English Meadows campuses throughout Virginia in Abingdon, Blacksburg, Christiansburg, Culpeper, Elks Home (Bedford), Louisa and Warrenton.
“My first impression of English Meadows in Blacksburg was how welcoming everyone was here,” relates Gloria Roberts, 87. “The attitude of the staff is wonderful, and they greet everyone with a smile. The apartment my family arranged is lovely and being able to move my own things into it made it feel like a bit of home. The staff is constantly encouraging all residents to participate in a multitude of fun daily activities. I have my privacy and can choose when I actively socialize.”
Corinne Shelor, activities director at Wheatland in Christiansburg, plans events that its residents can relate to. “We’ve had theme parties for every decade since 1900 this year,” she says. “It’s important to do things that our residents will connect with.” Wheatland is part of Commonwealth Senior Living, which has multiple Virginia locations, including Radford.
Highland Ridge Rehab Center in Dublin opened in 1969 and operates under The Landmark Group, Inc. Heritage Hall operates senior living places in Blacksburg, Radford and Giles County. Skyline Nursing and Rehab Center in Floyd County is a 90-bed facility.
Exceptional staffing is another area where our region is bucking national trends, as HDG reports that rural areas like ours face staffing challenges. But Williams says: “We have an amazing group of caregivers! We employ more than 100 people in the NRV who do a wonderful job. Our turnover rate is less than half of our industry average. It’s also great to have students from Virginia Tech and Radford University work with us during the semesters.”
Death and taxes are certain, but before the final one rolls around, residents of the New River Valley can also be certain they will have the good fortune of exceptional staffing and a full life if they move into one of the senior assisted living communities.

Lesley Howard holds an MFA from the Warren Wilson Program for Writers and lives in Blacksburg’s only co-housing neighborhood. She occasionally blogs at afiercelykindword.com