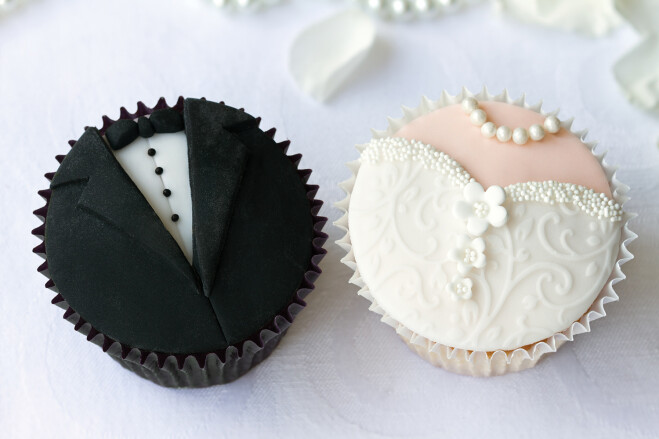 As far back as ancient Rome, cakes at weddings have played an integral role in the celebration. Well, in ancient Rome it was actually a loaf of barley bread, which the groom would break over the bride’s head. Somehow this practice increased chances of fertility. Over the years the tradition has morphed from barley bread to a tower of spiced buns in medieval England, from a pie filled with strange meats (think lamb testicles and boiled calf’s feet) in 1685 England to the tiered, white-iced cake we know today.
But what about cupcakes? Surprisingly, cupcakes initially became popular in 1919 when Hostess Brands came out with the very first mass-produced chocolate cupcake called…CupCake. That’s right, the company that brought Twinkies, DingDongs and Zingers into the world is responsible for the cupcake’s first wave of popularity.
And then came Carrie Bradshaw in 2000, having her pink-frosted cupcake and eating it too. Apparently, the Sex and the City scene from Season 3 showing Carrie and Miranda sitting outside the Magnolia Bakery, eating cupcakes while divulging love-life secrets, created a cupcake craze. Tourists began flooding the West Village bakery where the scene was shot, with customers asking for the vanilla cupcake with pink icing that Carrie had, now dubbed the “Carrie Cupcake.” Bakeries focusing exclusively on selling cupcakes began popping up across the U.S., and the craze made its way to the dessert tables at wedding parties.
Of course, couples have reasons beyond mimicking the fictional columnist’s snack to have cupcakes featured at their weddings. The very nature of cupcakes allows for so much versatility, between choosing various flavors and accommodating dietary needs to the endless options for decorations and table displays.
While the cost is usually noted as a main reason to go with cupcakes over a tiered wedding cake, Jen Morrison, co-owner of Our Daily Bread Bakery in Blacksburg, says that though cupcakes are less expensive, it’s not by a lot. Many couples choose a small cake for cutting, cupcakes to fill out the dessert table, and a simple sheet cake to slice in the kitchen and serve to guests. One would think that the cupcake order would tally up to at least one cupcake per guest, but Jen mentions a few factors that play into the total number. For instance, demographics—if the guest list has a lot of elderly relatives and children, the tally goes down. Kids will often share with mom or dad, while elderly guests are often more conscious of sugar intake. However, if multiple flavors are offered, the tally goes up. Who can resist trying more than one delectable flavor?
While there are couples who prefer to go against the mainstream in terms of cupcake flavors, many stick with the traditional options. For customers of Next Door Bake Shop in Blacksburg and Copper Hill Cakes & Goodies in Floyd, the most sought-after flavors are vanilla and chocolate. By keeping the flavor profiles simple, everyone has a dessert to enjoy.
For Our Daily Bread Bakery, the go-to flavors are those that are light in color: white, yellow or almond. Their signature flavor is a yellow cake with strawberries folded into a buttercream frosting for filling. Some notable distinctive flavors that have been requested include a lavender cupcake with Earl Grey frosting, a pistachio cupcake, and a mocha cupcake for fall weddings. Jen says that the most unique and fun orders to work on are those that bring out something personal about the couple. For one wedding where the groom was a football player, each cupcake had a small football decoration. For a same-sex couple, the Our Daily Bread team crafted a rainbow ombre icing swirl for the cupcakes, and the accompanying cake had rainbow layers.
The trend of cupcakes at weddings increased in 2020 due to the pandemic, and according to the bakers at Next Door Bake Shop, Our Daily Bread Bakery, and Copper Hill Cakes & Goodies, this will continue into the weddings of 2021. With shorter guest lists, these bakers predict that couples will continue swapping the traditional, tiered cake for a small, six- to eight-inch cake for cutting along with cupcakes for the guests. Beyond convenience because of fewer guests, cupcakes also allow for less contact: the only person touching the cupcake will, presumably, be the person eating it. They have also seen more requests for individually packaged cupcakes. Despite this being a safety precaution, Penny Webster, co-owner of Copper Hill Cakes & Goodies, says there are many cute packaging options available.
Other predicted trends, which do not have anything to do with covid-19, include traditional displays with a contemporary twist and rustic-chic décor—think cupcakes arranged on log serving slabs or on wooden crates. More couples have also been asking for cupcakes that meet various dietary restrictions, such as gluten-free, dairy-free, or vegan.
Thankfully, wedding cakes and cupcakes have come a long way from barley bread, meat pies and Hostess snacks, and there are no rules. Whether the couple wants handcrafted fondant flowers or icing that imitates lace, when it comes to creating a unique, delectable cupcake, as Jen says: “Your imagination is really the only limit.”

Kameron Bryant is a freelance writer who is seriously considering tossing her paleo diet in favor of cupcakes.