2 years ago
Band Together . . . an age-old symbol of forever 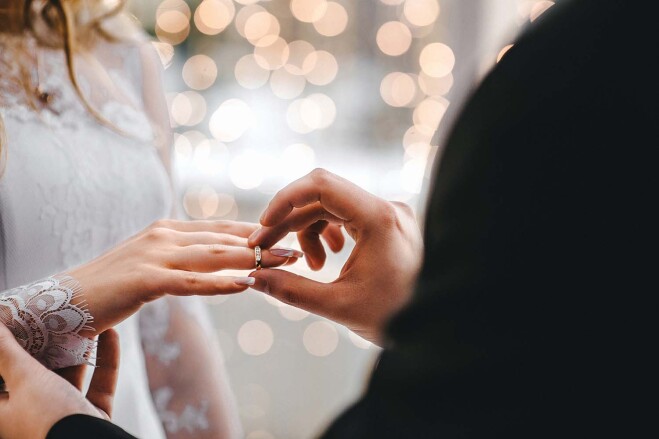 Neanderthals used twigs and bits of grass, usually secured around the ankle. The Egyptians used bone, leather, ivory and sometimes hemp. Early Romans used iron. Colonial Americans, believing jewelry to be trivial, used thimbles. When the wife was finished using the thimble to sew linens for the couple’s new home, the top was sawed off to create a ring.
No matter the material, from the earliest iterations to today, the wedding ring is viewed as a contract of sorts, signifying love, loyalty and even friendship. The fact that a ring, or something of circular shape, was chosen to represent a conjugal covenant is not incidental.
According to symboldictionary.net, the circle “has no beginning or end, and no divisions, making it the perfect symbol of completeness, eternity and the soul. The circle symbolism most familiar to us is that of the wedding ring, which symbolizes not just a pledge of eternal love, but the enclosure of the heart – a pledge of fidelity.”
The ancient Egyptians wore their wedding rings on the left hand’s fourth finger because they believed in the “vena amoris,” or the vein of love, which runs directly from the heart to this finger. No such vein exists, but the tradition of wearing wedding bands on the “ring finger” continues today.
Wedding rings are typically made out of select “noble metals,” or, elements that exhibit outstanding resistance to adverse chemical and temperature forces. This strength can be associated with the durability and permanence of marriage.
In order of most expensive to least expensive: Platinum is among the strongest, white in color and resistant to oxidation and corrosion. Palladium is up next, related to platinum in strength, never tarnishes and is naturally white in color. It’s also hypoallergenic. Both yellow gold and white gold are leading ring metals for their traditional look and durability. Tungsten is 10x harder than 18K gold, and you can choose between gray, platinum white or black. Titanium is extremely durable and long-lasting which makes it hard to resize or repair if needed. Silver has a high conductivity to heat and electricity and is easily engraved.
Austin Capone of Capone’s Jewelry in Blacksburg says the leading metal today is white and yellow gold – similar to their popularity 20 years ago. And for men, titanium is a top choice because it’s very light weight and darker in color. Though men didn’t historically wear bands at all until World War II, American and European soldiers began wearing rings as a way to remember their betrothed back home.
When it comes time to choose wedding bands, several factors should be considered, not the least of which is cost. Do a little soul-searching with your soulmate to gauge what factors are most important to you. Capone offers: “There are a couple factors that always go into a large purchase. The main considerations with wedding rings are cost as well as following trends and popular styles. We like to consider something that is timeless and durable enough to withstand everyday wear for many years.”
A recent, some might say, bohemian trend is to don a band made of silicone. They rose in popularity with the surge of fitness and outdoor adventure gurus who needed a ring to keep up with their active lifestyle. Silicone is extremely flexible and safe to wear in most all industry environments, from machinists and chefs to healthcare professionals and construction workers. Silicone prevents ring avulsion, or injuries caused by a ring getting caught on an object and getting yanked off rapidly. In 2015 host of The Tonight Show, Jimmy Fallon, almost lost a finger due to ring avulsion.
Troy Whittier of Pulaski chose silicone for this very reason. He owns a cattle farm and manages the Giles County Land Lab, constantly working with his hands often in tight spaces. He found himself removing his tungsten carbide ring and eventually lost it. “I had heard about silicone rings but hadn’t ever worn one. I ordered a box of 12 silicone rings for $10 and now have the option of switching colors or damaging them without any worry at all. It’s nice to always look married without the hassle of other jewelry,” Whittier states.
A quick buzz around the Internet will lead to any number of alternative wedding band materials: wood, dinosaur bones, meteorites and even rings made from whiskey barrels.
Ultimately, the value and symbolic importance placed on a wedding band is entirely up to the happy couple. The visual representation of your commitment to and love for each other is entirely customizable. However, if the idea of having to wear jewelry all the time is not in your comfort zone (but hundreds of tiny needle pricks are), some folks have chosen to have their ring finger tattooed. It’s hard to get more permanent than that.

Other Cultures Marriage Symbols of Marriage

Celtic Nations:
Rings often come in the Claddagh design, showing the gesture of a crowned heart clasped by two hands. The hands represent friendship, the heart represents love and the crown represents loyalty.

Hindu:
Hindu wives wear bangles on both hands that are either red or white. Often made of glass, if the marriage ends or the woman becomes single again, the bangles will be shattered.

Mexico:
During the exchange of vows during a Mexican marriage ceremony a “lazo” or lasso made of rosary beads and flowers is draped around the couples’ shoulders in the shape of a figure eight, the infinity symbol.

Nancy S. Moseley is a writer from Blacksburg who spent time in her early 20s giggling with girlfriends and poring over wedding magazines for the “perfect” ring.