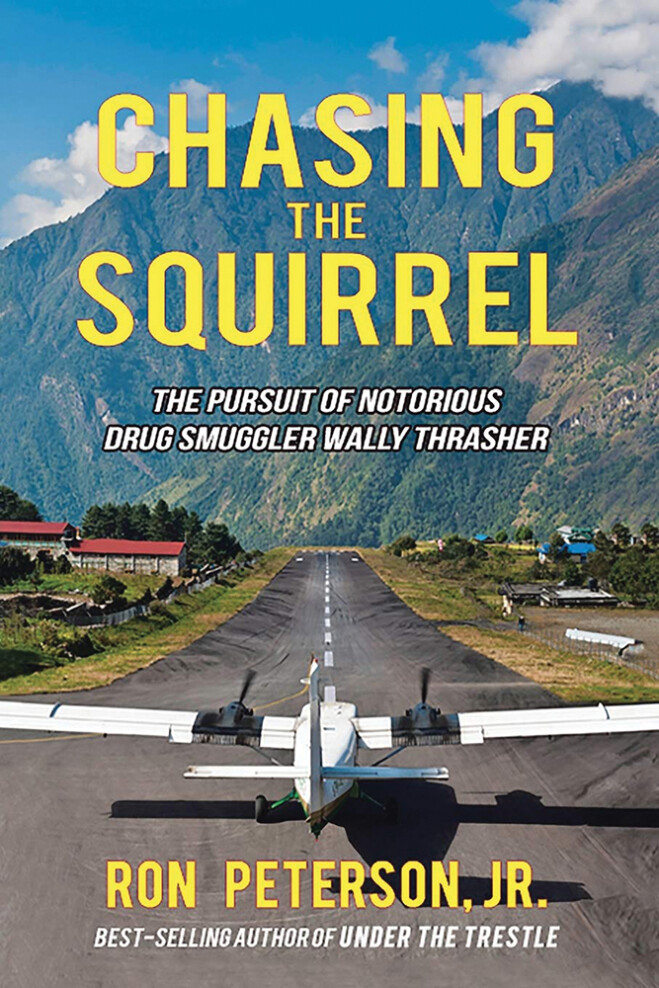 Born on June 27, 1940, Pulaski native Wallace “Wally” Thrasher had Hollywood good looks and the charisma to match. The blue-eyed bandit stood a sinewy six-foot-two inches tall and was elusive on the Pulaski Cougars football field. That earned him the nickname “Squirrel” for his ability to cut back and juke out the opposing team.
Thrasher was also elusive off the football field, when he found his way into a notorious marijuana smuggling operation. He flew planes out of Colombia, Mexico and the Caribbean while keeping the sagging belly of the overstuffed aircrafts just barely above the tops of trees. He maneuvered planes with the same darting energy he displayed on the gridiron, and thus his moniker received an upgrade to “The Flying Squirrel.”
Thrasher made millions of dollars flying plane loads of pot into Virginia and had several near-death experiences in the process. Ron Peterson, Jr., the best-selling author of Under the Trestle, the 1980 Disappearance of Gina Renee Hall & Virginia’s First “No Body” Murder Trial, has recently written a book about the New River Valley’s own Wally Thrasher, entitled Chasing the Squirrel: The Pursuit of Notorious Drug Smuggler Wally Thrasher. The book tells of Wally’s many daredevil escapades, including surviving two years in a deplorable Mexican prison and the time he wrestled a gorilla!
The book has now inspired a documentary series, “Where’s Wally?” that will feature on-camera interviews with Thrasher’s wife and son, some of his old drug smuggling associates, and even the law enforcement and Drug Enforcement Administration (DEA) officers who chased him. Though Wally spoiled his wife, Olga, with a life of luxury, including a lavish second home in Florida that they enjoyed flying to and fro, the couple could not resist the tranquil mountain valley way of life and eventually settled in Little Creek Valley in Bland County, which borders Giles County on its southern side. Though many of the local folks knew the true source of the Thrasher’s massive income, they were treated as if they were local celebrities, and the air of speculation that swirled around them stayed just that, speculation.
Having grown up in Pulaski, Wally of course had many adventures upon the waters of Claytor Lake, including swimming across it on a dare. It is no surprise that he wound up owning property on Claytor Lake as well, and there are still rumors of large swaths of cash hidden in the walls and under the floors of Thrasher’s former lake house.
Though he had always stayed two steps ahead of law enforcement, taking great measures to use fake names and bail on any operation that made him uneasy, his luck eventually ran out in 1984 when one of his planes — stuffed to the hilt with marijuana — crashed in a thick fog in Fancy Gap, leaving more than 500 pounds of pot scattered across the mountain, valued at more than $500,000. This crash caught the attention of local news and national authorities. Thrasher was listed as the person who paid the hangar and maintenance bills for the aircraft, and there was little doubt in anyone’s mind that he owned it.
Rather suspiciously, just several weeks later, as drug investigators were closing in on him (despite Olga providing them with a falsified death certificate from Jamaica, for which she was later arrested), Thrasher supposedly died in a fiery plane crash in Belize, and his body supposedly burned to ashes. Yet another “no body” case for a Virginia crime. Some believed that he died in the Belize crash, while others believed that he faked his death and may still be alive. Olga did hold a funeral for Wally that November in his hometown of Pulaski. She also ran a paid death notice in the local Roanoke newspaper.
The federal investigation of Thrasher, however, did lead to the largest drug bust in mid-Atlantic United States history in 1986, when more than $150 million in drugs and cash were seized by the DEA, and 13 international traffickers were brought to justice.
Today, Thrasher would be 81 years old, and U.S. Marshals believe he may still be alive, living the good life in a faraway tropical land.
However, the indictment against Wally was dismissed in August of 2015, under the belief that he is likely deceased. Many questions still swirl around the case, most of which may never be answered. If his body burned to ash with absolutely no remains, how was his gold wedding ring perfectly preserved and sent back to Olga from his associates in Belize? Would Wally be able to live out the rest of his life with no contact with his wife and two children?
Some claim to have met Wally, alive and well, operating from Cuba with another fugitive. Some say he is working with the CIA and has been for years. Wally Thrasher is certainly one of the New River Valley’s greatest Unsolved Mysteries.

Emily K. Alberts’s comedic response to the question: “What brought you to Blacksburg?” is often a jab about being in the witness protection program.