8 months ago
Ultimately, The Gift of Time 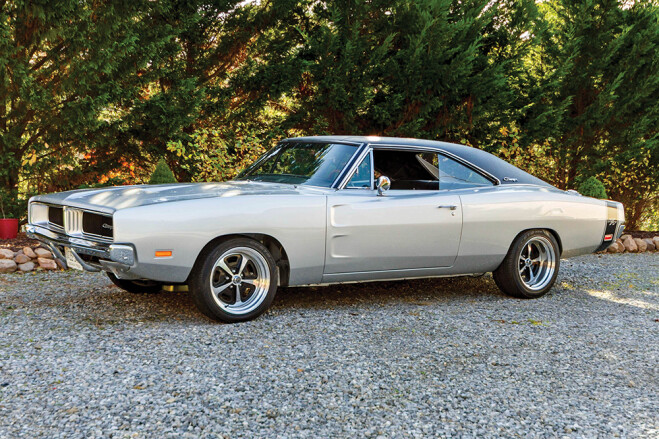 You know the old saw: Some people see the glass half empty and others view it as half full. Such was the case with an old heap of a car with no windows which sat in the woods for 15 years in south-central Virginia. It had sustained the damage of Father Time and Mother Nature and was seen by many as a top candidate for immediate relocation to the scrap yard.
Chad Wikle, however, saw things differently. “It would have been perfect for Fred Flintstone,” he recalls. “It had no trunk, no front end, no interior, no engine or running gear. But, hey, this vintage muscle car had a good roof, good frame rails and two doors, basically four parts with redeeming value.”
Wikle’s vision for the 1969 Dodge Charger R/T can be credited to his superior skills and keen eyes for an end result that not everyone can visualize. He has been doing collision repair work since high school, graduated from Nashville Auto Diesel College in Auto Body Repair and is an I-CAR PlatinumTM certified collision technician. He has 25 years of experience in collision repair work, and purchased the Charger from a co-worker who determined it was not a project he wanted to undertake.
What are you going to do with that thing?
And what better way to justify such a ridiculous acquisition than to buy it for the next generation? Wikle thought it would be a great project for his son! Once he hauled it home, most of his friends and family members queried: “What are you going to do with that thing?”
Across more than a decade of spare time, Wikle relates what he has done with that thing:

? Rebuilt the entire car
? Took every bolt off the car
? Redid all the interior
? Replaced all the rusty sheet metal
? Added the vinyl top
? Painted the bottom of the car to look
like the outside’s new paint
? Put in the engine
? Added a transmission
? Upgraded the four-wheel disk brakes.

What did I get myself into?
One of the first tasks at hand was taking what was left of the car and putting it on a rotisserie to identify and track down core components that would make his son proud one day. He has attended auto parts swap meets, junk yards and online vendors to buy one piece at a time. It has taken longer than expected due to the difficulty in finding parts for a car that was only made one year, 53 years ago.
Wikle is still waiting on a couple interior parts that he ordered months before the global pandemic. He faced challenges while sourcing parts and has done lots of networking, which has included getting to know the Mopar® crowd. (Mopar = MOtor PARts. Mopar.com)
There have been days when Wikle thought: “What did I get myself into?” His family jumped into the fray wondering seriously if he lost touch with reality when just the floorboards cost more than the price he paid for the vehicle.
Wikle has a body shop with a frame machine and paint booth. “I own all the tools of the trade needed to build cars from the ground up. I have worked in the New River Valley doing collision repair for 25 years. I am a master at my trade, and I am passionate about the restorations that I take on.” Wikle has contributed to many vintage restorations in the region, yet enjoys spending a lot of time in his shop, doing what he does best.
Did you get that car done?
There were some family conversations around the color the vehicle would eventually be painted. Wikle himself favored a bright color like orange, akin to the General Lee, the ’69 Dodge Charger in “The Dukes of Hazzard” TV show. Discussion ensued, and the family ultimately settled on silver which evokes dignity and contrasts comfortably with the black vinyl roof.
Wikle has all the skills for the complete restoration, and sourcing the necessary parts in good condition proved to be the biggest challenge. Historically, he works faster than others in his industry, but has had to slow down to field so many questions from people asking: “Did you get that car done?”
Well, mostly, yes. It has a 440-cubic-inch big block and a 727 transmission. “It has the characteristic hideaway headlights, vinyl top, R/T stripe around the back of the car and 17-inch American racing wheels,” Wikle adds. The coke bottle shape of the car is a notable feature.
The dash and door panel have been autographed by Richard Petty (7-time NASCAR champion) , Cathryn Bach (actress), James Best (actor), John Schneider (actor), Sonny Shroyer (actor), Tom Wopat (actor) and Ben Jones (actor). Richard Petty raced Plymouths and Dodges for years during his illustrious racing career.
While Wikle’s son Andrew was often gifted Charger car parts for holidays and birthdays, the entire classic vehicle has now been gifted from father to son. In the end, it’s really so much more than a car, but a treasure with more than a decade of talent and time devoted to it. And, time really is the greatest gift of all.