5 years ago
Walking to Inspiration in Prague 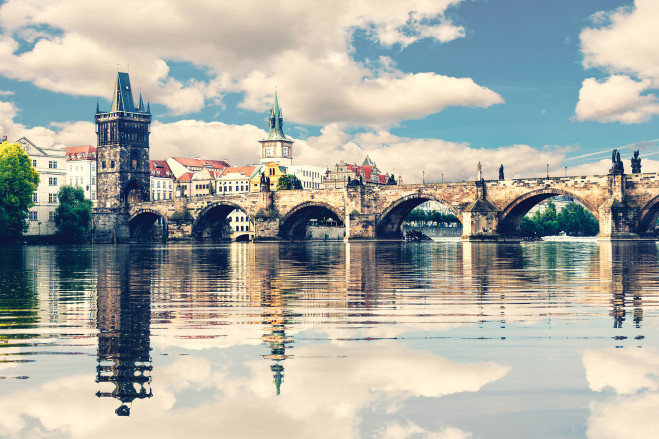 Story and photos by Krisha Chachra

Arguably the most beautiful city in Europe, Prague, Czech Republic, is a landscape of storybook castles and cobblestone bridges that stand alongside modern eateries and hipsters creating art and music on street corners. Left largely unscathed by the destruction endured by most of Eastern Europe during World War II, the “City of a Hundred Spires” still has much of its original medieval architecture. Block by block, architectural enthusiasts marvel at different styles: Renaissance morphing into Baroque, Neo-Classical transitioning to Art Deco. Eclectic building elements make the city visually stunning while maintaining its traditional Old World charm.
When I moved to Prague to attend the Prague School of Economics in the late ‘90s, the whole country was navigating through a transition from a planned to market economy. Today, the city remains a hub for change and revolutionary thought. After all, the Czech Republic gained its independence in the late ‘80s led by a handful of poets, artists and creative types who rose up against the Soviets.
When I lived there, the culture was still adjusting to the immigration that came with newly open borders – a stark change in diversity after being behind the iron curtain for so long. Some say Prague still has undercurrents of xenophobia but the new generation of Czechs welcome everyone – including the thousands of tourists and ex-pats who flock to the city in search of inspiration. And that’s what I needed as an aspiring young writer with many thoughts but not enough substance and experience to impart. I didn’t know what I was looking for, but at the age of 21, I found Prague.
Without a car or bike, I walked, zigzagging through Prague’s notable and romantic landmarks. The Jewish Quarter, The National Theatre/Estates Theatre – which debuted Mozart’s “Don Giovanni” – and the Globe Bookstore were places I would frequent. Life in your early 20s can be confusing, and instead of standing around trying to figure it out, I walked. The ideal place to start in Prague is Old Town Square.
Although touristy, Old Town Square is steeped in history and lined with outdoor cafes and restaurants, including U Parlamentu, a local’s brewery serving authentic goulash, dumplings and schnitzel. The most prominent attraction in Old Town is the ornate Astronomical Clock. This clock doesn’t tell time, rather it registers the phases of the moon and equinoxes. When the clock strikes, symbolic depictions of fate and sin (including a money bag representing greed, a mirror for vanity and a skeleton to depict death) dance around the top, warning viewers standing below that these vices are looming above them.
Across from Old Town Square, I walked to Prague Castle. Perched on a hilltop overlooking the city, this castle is the residence of the President of the Czech Republic and has housed kings and emperors and, of course, the royal bohemian crown jewels. Prague Castle is a UNESCO World Heritage site and showcases several architectural styles from 10th century Romanesque buildings to Gothic structures from the 14th century. In the courtyard, tourists are often treated to a live string quartet or madrigal singing. Make sure you stroll through St. Vitus Cathedral, the Royal Palace, St. George’s Basilica and the Golden Lane – where homes have been transformed into a living history corridor to depict how artisans lived and worked in medieval times.
My inspiration came from a place that was appropriately the connection between Prague Castle and Old Town Square. In fact, most thirsty creatives need look no further for inspiration than Charles Bridge (Karluv Most). This bridge is where stories are written, art is formed and languages from all over the world are exchanged. Straddling the expansive Vltava River, the 14th century cobbled bridge is flanked by two elegant towers. But the signature feature is the two rows of more than 30 statues of saints. I remember spending hours sitting under the Statue of the Holy Crucifix and Cavalry on the North writing about people, travel and everything I saw. A busker named “Ice” – a musician from the U.S. – entertained me by singing “Country Roads,” mistaking me for a native of West Virginia instead of Southwest Virginia. I appreciated the thought, and it made for a good essay later. I walked the cobblestones on that bridge hundreds of times – talking to visitors, browsing watercolors for sale and shepherding friends who wanted a tour of the city’s finest attraction.
It seemed fitting that my shoes wore down so badly you could see through the soles. On my last night, classmates and locals I befriended met me at the bridge at midnight. We toasted to the memories of Prague we made together, laughed in the dark and drank champagne. Then, in a burst of spontaneous inspiration, I took off my worn-out shoes and tossed them over the side of the Charles Bridge. Down they went, splashing into the mighty Vltava. I had walked my way to finding the inspiration that only Prague could deliver. It was time to go home and write my story – and I knew I needed a new pair of shoes.

Krisha Chachra serves on the Town Council of Blacksburg and is a regular columnist and author. She has traveled to over 40 countries on 6 continents and reported and hosted shows for public radio and television. Her columns are taken from her journals and personal insights from traveling nationally and internationally throughout her life. Her book about returning to Blacksburg, Homecoming Journals, may be found online or in local bookstores. E-mail her at kchachra@aol.com