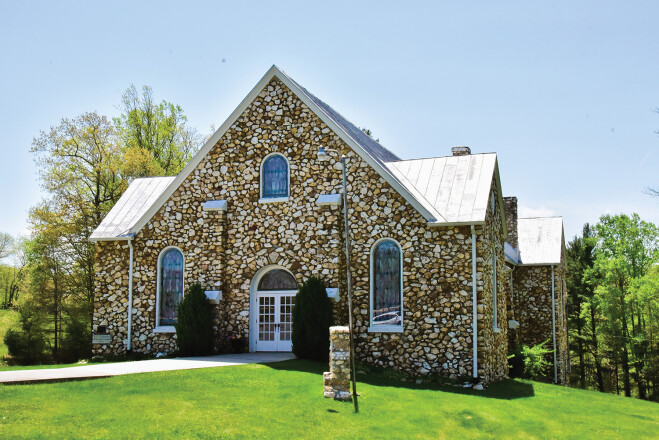 Reverend Robert Childress built churches—lots of churches and all but one from rocks in the 1.8-billion-year-old Blue Ridge Mountains. Isolated sections of Floyd, Patrick and Carroll counties conceal these stars in Bob Childress’ crown. The churches are designated Virginia Historic Landmarks.
If you spend time near Buffalo Mountain in Floyd County, you’ll hear tales of superstitions, bootleggers and feuds. And, maybe, the story of the man who moved mountain people a little closer to God.

Robert “Bob” Childress was born during an 1890 blizzard in Ararat in Patrick County. One of nine children, he was reared by dirt-poor parents in a one-room cabin in The Hollow, overlooking Buffalo Mountain.
His older brother encouraged Bob to attend school, and young Bob found he loved learning. However, when his beloved teacher married and left the mountain, his education abruptly ended.
Returning to high school nearly 15 years later, he sought a degree from Union Presbyterian Seminary in Richmond. This stubborn man, husband and father of four persevered and graduated. He longed for a church in the mountains, but his only call came from a North Carolina church.
The night before his decision was expected, Dr. Clark of the Montgomery Presbytery offered Bob Childress a field on Buffalo Mountain in Floyd County. Dr. Clark told Bob: “They’re shooting each other, they’re ignorant, they don’t have a chance, they have no schools or Sunday schools. There’s enough work to kill you, but we’ll furnish you a living while you’re at it.”
On June 3, 1926, the family moved back to Buffalo Mountain where Childress ministered to mountain people for 30 years. He built schools and churches, ultimately building six rock-faced churches between 1919 and 1950. This Presbyterian minister became the focus of The Man Who Moved a Mountain, a book by Richard C. Davids.
Bob provided practical help for the mountaineers, not just spiritual guidance. He routinely visited five to eight families a day; often leading prayer meetings in those homes. Since he had the only car on the mountain, he frequently transported people to doctors.
Childress knew the mountain people needed jobs to provide hope of a better life. Timber grew on the mountain, but it seemed impossible to make this a viable enterprise without roads. Bob took out a personal loan, bought second-hand sawmill equipment and put local men to work. Construction became his next goal, and Childress put men to work building churches so people wouldn’t need to travel far to worship.
A lack of building materials didn’t slow him down. He took advantage of the one thing the mountain had more of than trees: Rocks! On Sundays, his circuit tallied 100 mountain miles and four or five sermons. When the mountain was covered in snow, he traveled by horse and buggy or rode a more sure-footed mule. The mountain became more civilized, killings tapered off, and liquor lost its power over people, replaced by spiritual strength.
By the 1950s, Reverend Childress averaged 40,000 miles a year to minister to 14 churches, leaving his mark on the people and place he spent a lifetime loving—and a legacy of rock churches. When speaking upon his 1956 death, the Synod of Virginia stated: “Only eternity will tell the tremendous good accomplished in this unusual diocese.”

New River Valley Blessed with
Three Rock Churches, Plus One

Buffalo Mountain Presbyterian Church is a beautiful fieldstone structure. It is acclaimed as one of the most picturesque rural churches in America. Three of Childress’ five sons became preachers, and after Childress’ passing, his son, Bob, Jr., became pastor of Buffalo Mountain, as well as Bluemont and Mayberry churches.
Childress was laid to rest in the rock-fenced Buffalo Mountain Cemetery, overlooking his church, his flock and the mountains he loved. It’s possible that Bob Childress is one step closer to his heavenly home from his heaven on earth—the mountain he moved.
Son Bryan served Stone Memorial Church in Marion. Still, he preached every fifth Sunday at his father’s Slate Mountain Church, tucked away behind Mabry’s Mill. Built in 1932, this church’s growth necessitated expansion in 1951.
Bob Childress, Jr., passed away in 2003. Today, the third generation of Buffalo Mountain Childresses conducts services from the pulpit where his grandfather and father ministered to congregations. Stewart Childress holds services at Mayberry Presbyterian Church at 9 a.m. and Bluemont at 10:30 a.m. every Sunday.
Willis Presbyterian was constructed in 1954, only two years before Reverend Childress passed away. The congregation has operated since 1939. Willis Presbyterian Church became the Interfaith Church of Willis in 1967, and in 2003, it was sold to Grace Baptist Church.
Indian Valley was constructed in 1946 and it is the only church founded by Rev. Bob Childress that is not covered in rock. The church is down narrow country roads that wind between the hills. After retiring from his Marion church, Reverend Bryan Childress began to minister at this church.

The most fitting tribute to Bob Childress may well be this story related in The Man Who Moved A Mountain. He built so many rock churches that it became the source of local jest.
Dump Yeats’ son, Hassell, commented as they passed by a plain wood church: “Mr. Childress never saw this church.”
Puzzled, his father asked: , “How’s that?”
Hassell replied: “He’d have rock-sided it afore now!”
I can think of no more appropriate covering for a mountain church than the rock of ages.

Text and photos by Jo Clark

Jo Clark has always loved rocks, and as we say in the South, she got it honest! She was raised by a woman who pulled rocks from the Floyd and Patrick County mountain waters while her husband fished for speckled mountain trout. www.HaveGlassWillTravel.com