2 months ago
Unexpectedly Retiring to the New River Valley 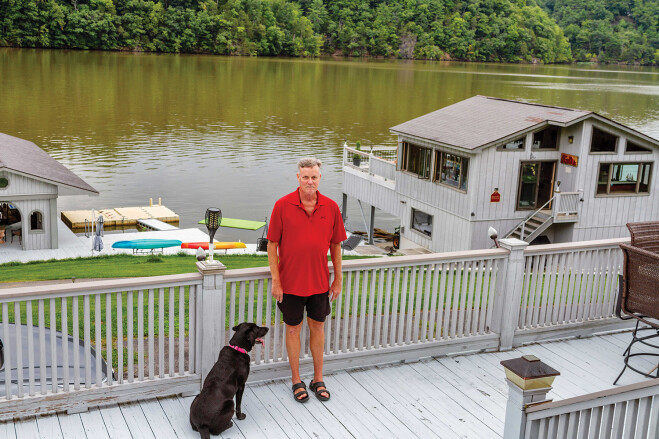 When Joe Hotter was told 900 words – or thereabouts – were needed on his life for this article, he exhaled sarcastically: “Oh boy. We’re in trouble now.” But with the first question, his story began with gusto.
“I was born in Berlin, Germany. My Dad was in World War II and eventually became a spy,” he pauses, “you could write 9,000 words on him!”
Hotter was six years old when the Berlin Wall went up down the street from home. When the family moved to Springfield, Va., he was 11, and the main thing he carried across the pond was not memories of oppressive communism. It was distinguishably awesome soccer skills.
“Coming from Germany, I actually knew how to play the game. I played in the first high school game in Fairfax County. I played every sport, but I was built for soccer and played 22 years.” Hotter attended Virginia Tech after high school graduation, enrolling as a co-op student. He worked as a computer programmer for the CIA throughout his college years.
Not ready to enter the working world, he entered law school at William and Mary. He laughs about being the “Token Techie,” since at the time (colloquially speaking), William and Mary only admitted one person from Virginia Tech every year.
Like many state school graduates, he left the rolling hills of higher ed for the traffic-lined streets of Northern Virginia, opening a law practice in Springfield. He married three years later and eventually became a daddy to four girls, one step-daughter and one born with Downs Syndrome and a heart defect. Joelle passed away at 19 months old after an unsuccessful open-heart surgery.
“That was a turning point in my life. I lost interest in a lot of things.” After several years of coasting complacently through the grind, he had two more girls, two years apart, Jessica and Jocelyn (who live in the house profiled on page 26.)
He took the resurgence of dad-life as a sign to make some changes. He quit his law practice and became a stay-at-home dad for a year. “Then I realized that was way too much work. I needed to do something a little less stressful,” Hotter laughs. So, he became an entrepreneur, first with a wildly successful business cleaning exterior surfaces of buildings like The Pentagon and major sports arenas. Next he co-owned a company that put in major sports and recreation fields, like Lambeau Field in Green Bay. Finally, he settled into financial consulting for several companies.
Ever a sports guy, he coached youth sports for 42 years. “I started out with youth football, which was all boys. Then I had girls, and I coached my daughters in every sport they played. That was probably the best time in my life.”

Hotter began looking at houses in the New River Valley for the girls, even before it was certain that Jessica and Jocelyn might live here. Sometimes the best-laid plans become better-laid plans. After pulling into the driveway of a house on Claytor Lake, Hotter recalls saying: “I’m buying this house. I’m moving here. I had zero intention of relocating to the NRV the day before.”
He moved lakefront within six weeks, knowing nothing about boating and with no desire to fish. Consultant work allowed him flexibility and covid can be credited with easing him into a perfectly-timed retirement.
Hotter’s lake compound has a main house and a guest house he rents through AirBnB, plus three boathouses and all the water toys – a jet ski, kayaks, paddleboards, a pontoon party barge and fishing boat.
The rental guest house, named “Quattro Doggos” for the collective number of pups the family has, is on the river side of the Lighthouse Bridge, a significantly quieter side of the lake. He jaunts into Blacksburg weekly to enjoy live music at The Farmhouse and, again, ever the sports guys, the array of exciting Division I sports. He attends a lot of basketball games, baseball games and girls’ softball. When asked if he has season tickets to football, Hotter laughs. “I have season tickets to the parking lot. It’s the highlight of my year. I go to every tailgate. And then I normally walk downtown and watch the game on TV, even if I have tickets. It’s more fun.”
Perhaps it takes a bit of time and a bit of life experience to chase the more peaceful option, the one with less traffic, more downtime and better views. Perhaps it takes that one crossroads moment to be content settling on the quieter side of the lake. Knowing, all along, it’s where you’re meant to be.

Nancy S. Moseley is a freelance writer in Blacksburg. She is envious of those who live the lake life full-time and is already thinking of a time to book “Quattro Doggos” for a getaway. Too bad trading some of her season tickets wouldn’t be a good deal.