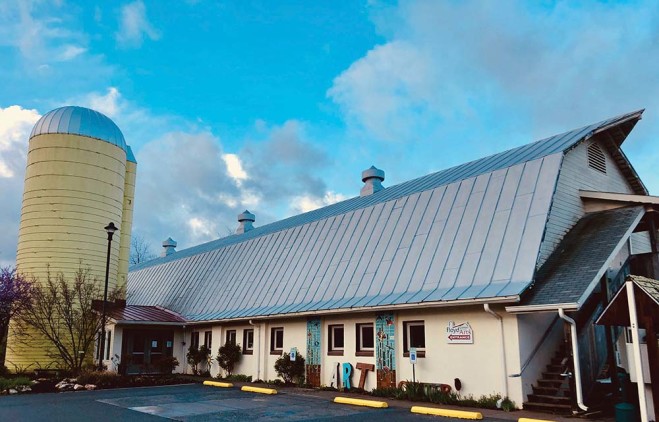 This year marks the Floyd Center for the Arts’ 25th year. Throughout two and a half decades, the Center has been an advocate for Floyd artists by providing studio space, fostering art sales and creating learning opportunities. These activities bring revenue to the county and town while helping to provide a living for working artists.
In addition, the Center creates an artistic environment for students from beginner to advanced. Each year, the Floyd Center for the Arts leads more than 200 events to learn and appreciate art including gallery shows, festivals, music presentations, workshops, arts clubs and kids classes. “The great success the Art Center has seen is thanks to our wonderful contributors, volunteers, staff and artists,” says Linda Fallon, president of the board of directors.
The Center’s story began in 1995 when a group of forward-looking residents saw a historic but neglected dairy barn and wondered about the potential for using it to link the valuable and talented Floyd County artisan community. As individuals began discussing the idea with neighbors and friends, a common response was: “Are you talking about the Old Jacksonville Barn?” It is near the Jacksonville Cemetery on Route 8. Everyone began referring to the historic space with its growing activity as the Jacksonville Center. Until 2016, it was known as the Jacksonville Center for the Arts.
Working with the barn owners, this group of arts activists obtained free access to the property in that first year. The leadership team solicited community feedback about the future center and development of the non-profit organization officially known as “The Floyd Community Center for the Arts.” This was also the year that christened the Center’s longest running program – Winterfest, a holiday celebration of the arts in Floyd that gives artists a chance to sell their work.
Winterfest was designed as a year-end showcase of local artisanship and creativity, in time for local residents’ holiday shopping. It has faced many challenges, especially that first year. “It was freezing in the barn, but the team leading the Center’s development was determined. They wanted a significant art center in Floyd, and they got it started in spite of the challenges,” relates Jeff Liverman, executive director.
Basic infrastructure was a major concern. The building had been a working dairy barn in the 1940s and had begun a long process of deterioration in about the mid-1970s. Undeterred, the Center began a series of programs, despite the barn having no sewer and non-potable water, no heat and some scary areas of limited public safety.
By April of 1996, the Center was awarded its non-profit status and initiated its most enduring relationship with the Virginia Commission for the Arts (VCA), which has been a financial supporter since 1998. The Floyd Center for the Arts remains a top-tier, Priority 1 organization with the VCA – an honor for a small, rural art center.
The time between 2000 and 2005 saw major improvements to the barn and adjacent buildings. Thanks to significant state and federal grants and private funding, the Center renovated the barn and site while expanding its programs. Nearly $600,000 was invested in making the barn a functional facility, including handicapped accessibility, the only elevator south of the town’s sole traffic light, and amenities such as heat and plumbing. In addition, the Art Center became Virginia’s first Residential Crafts School, opening for classes in 2005. By this time, the organization had created three paid positions and was partnering with many local efforts to promote visitation, new business and artisan entrepreneurship in the region.
During the years between 2014 and 2019, other major improvements to programs and facilities were afoot. Thanks to significant grants and donations, the Center paved its parking lot and added to the barn building with additional gallery space and an energy-efficient entry. Quiet, efficient heating and cooling systems were added to the Community Room, and LED lighting replaced incandescent lights in the galleries. During this period, the Center’s board worked with stakeholders to craft a comprehensive new strategic plan that drives all of the improvements. In the last three months, the Center completed a major renovation to the second floor of the barn building, taking up the old vinyl and installing hardwood flooring.
Today the Center is a vibrant beacon for the arts in Floyd, leading major efforts like the annual Floyd Artisan Trail Tour, the weekly Floyd Artisan Market, the Biennial Floyd Plein Air event, and new this year, the Floyd Gallery Walk tour. Each year the Center hosts a classical/jazz concert series which draws national and international musicians. It is going to be quite exciting to see what the next 25 years will bring to the creative artisan community in this small town with a very big heart for the arts.

Text and Photo Courtesy of Floyd Center for the Arts