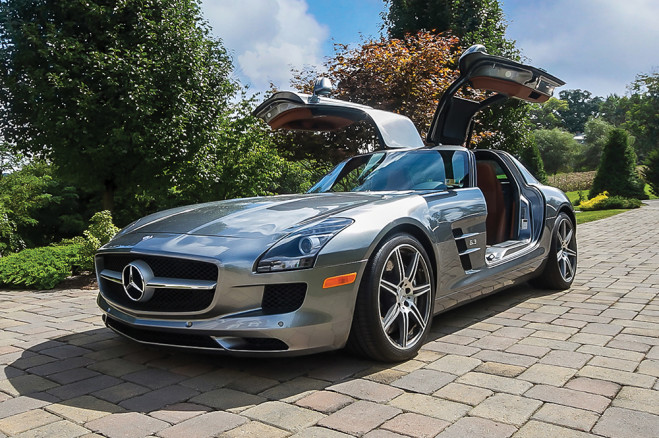 Mickey Hayes’s first hotrod was a 1934 Ford sedan with a Chrysler hemi engine. His most recent hotrod came off the factory line fully optimized, with no improvements necessary: a 2011 Mercedes SLS AMG 6.3 Gullwing. Capable of going 0 to 60 in 3.7 seconds and with a top speed of close to 200 mph, the car is about as fast as you can get.
The hand-assembled coupe is impressive in many ways. The throaty rumble which pours forth when Hayes cranks the ignition is reminiscent of the roar at a racetrack. Its doors are hinged at the top and lift upward, giving the car, when its doors are open, its distinctive forward and rear profile, like that of a seagull in flight (giving rise to the gullwing name).
Hayes purchased the car new in 2011 when the model had just been released. The car continued to be produced until 2015. But another Mercedes Gullwing was in Hayes’s mind when he bought the car, sight unseen, in 2011.
“Here’s where it all got started,” Hayes explains, pointing at a photo on the wall of his garage of a former car of his, a 1955 Mercedes 300SL Gullwing. Widely considered the most significant road-going Mercedes of the postwar era, the 1955 300SL is a classic car in the truest sense.
Its sportiness and gullwing profile provided the inspiration for Mercedes and its in-house performance division, AMG, in the creation of the SLS Gullwing. AMG was not always part of Mercedes. It began as an independent enterprise in the late 1960s when two German engineers banded together to build performance racing engines. In 1971, an AMG modified Mercedes 300 SEL 6.8 took second place overall at the 24 Hours of Spa, schooling a field of lighter race cars and giving notice to the automotive world of the engineering prowess of the upstart firm. AMG continued to design performance improvements for stock Mercedes models until the firm was eventually bought out by Mercedes’ parent company.
The 2011 SLS AMG is the first Mercedes designed and built entirely from scratch by AMG and has no shared structural components with other Mercedes-Benzes built at the time. The car has an aluminum body and an aluminum shell, designed to provide rigidity while also being light. The driveshaft is carbon-fiber, the engine a V-8, and the transmission a 7-speed automated manual with paddles on the wheel.
Even though the vehicle is referred to as 6.3, the engine is 6.2 liters, a modified version of AMG’s standard 32-valve aluminum engine, with improvements including a low-back-pressure exhaust system, a stronger crankshaft, a stiffer crankcase and dry-sump lubrication. All told there are more than 120 parts in the engine and a nameplate on top indicating the craftsman who built it. Add it together, and it equals 563 hp and 479 lb-ft of torque.
The handling is tight as you would expect from a performance racecar, with speed-sensitive, variable-assist power steering. You can also switch from sport to non-sport mode with the touch of a button in the cabin, but Hayes will attest that you still know you’re riding a sports car when you drive in non-sport mode.
“It’s a tough-sprung car,” he relates. “It’s built for going around corners at 100 mph. It’s not a soft ride. It’s the real deal.” It also has a stout braking system and a back fin for down force traction enhancement which raises automatically at 70 mph or at the touch of a button.
This car has 4,000 miles on it, none of those driven in the rain. Hayes (who was featured with his 1960 Rolls Royce Silver Cloud II in an issue of New River Valley Magazine last year) bought the car new from a Northern Virginia Mercedes dealer, trading a 2002 Rolls Royce Corniche convertible for it in a straight up deal.
Hayes, a 1964 graduate of Virginia Tech, is a noted donor to the university. He has been part of the Hokie Club since 1967, when it was known as the Virginia Tech Student Aid Association. He remains active in his DKE fraternity, mentoring current Virginia Tech DKEs. It was his wife, Sarah, who suggested they move to the hometown of his alma mater when he retired as a real estate developer, primarily on the Outer Banks.
“Other than marrying Sarah, moving back is the best thing I ever did,” he admits. “I absolutely love it here, and I love Virginia Tech. I got a great education. We always have something to do, and we are huge fans of Virginia Tech athletics. Go Hokies!”