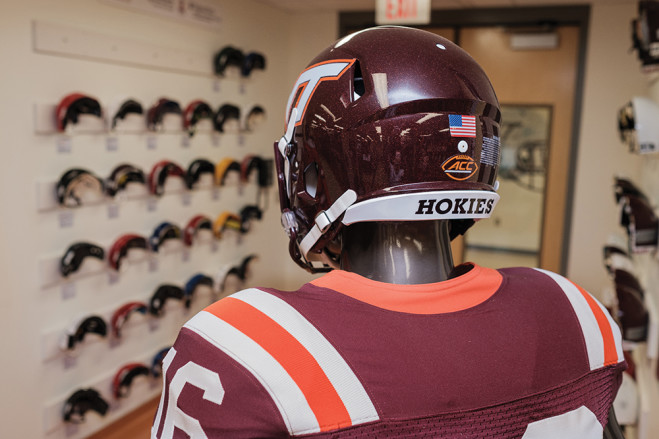 Now a beacon for branding and sparkly nuance, the American football helmet was once made of nothing but hardened leather. It is inarguably the most important part of the uniform yet, shockingly, after the leap from leather to plastic in the ’50s and to polycarbonate (better plastic) in the ’80s, very little has changed in helmet construction over the years. Protecting the head was a priority, but a prevalent apprehension in the industry made it not that much of a priority.
“It was an environment of ‘what we don’t know, we’re not responsible for,’” offers Mike Goforth, Virginia Tech’s Associate Athletics Director in Sports Medicine. “Cadavers and injuries were studied after the fact. There was never the ability to measure real-time impacts on live subjects.”
Cue modern technology. And Dr. Stefan Duma.
Duma, founder of the Virginia Tech-Wake Forest Center for Injury Biomechanics, attended a military conference in Puerto Rico in the early 2000s. He saw a presentation on the use of electronic sensors in soldiers’ helmets as a way to better understand injuries sustained in combat.
Interpreting the technology as a potential game-changer for football game safety, he returned to Blacksburg and partnered with team physician Gunnar Brolinson and former head coach Frank Beamer to champion the use of accelerometers in football helmets to record impact data. The big-picture goal? Construct better, smarter headgear to streamline the diagnosis, prevention and treatment of concussions and head-related injuries for any helmeted sport or activity.
Shortly thereafter, approximately half of the Virginia Tech football team was equipped with helmets bearing six sensors spread out across the crown of the interior. In 2007, the Virginia Tech Helmet Lab opened in the bottom of Kelly Hall to process what the accelerometers were reporting.
“We’ve sort of become the consumer’s report of the helmet industry,” states Barry Miller, Director of Outreach/Business Development. “Since helmets are certified on a pass/fail basis, our objective testing has allowed us to create a ranking system to tell you which ‘pass’ helmets are better.”
That grading system, released in 2011, utilizes data from 37,000 impacts and is called STAR: Summation of Tests for the Analysis of Risk. STAR disseminates all of the research down to a simple, visual interpretation. Five-star helmets are the best at reducing adverse effects on the brain; one-star, not so great. Top-rated helmets can take a 350 g-force hit down to 130 g’s. For context, roller coasters average around 5 g’s.
All testing is done with respect to the dominant risks of a particular sport. For example, for football and hockey helmets, a swinging pendulum is used to change the angle and energy of impacts to four different places on a head form. Each helmet is hit 12 times. In soccer, since most concussions are head to head, not head to ball, two head forms are set up to smash together at varying speeds and angles. In life, cycling helmets are built to sustain a crash and be discarded, so six of the same helmet are required to fulfill the testing parameters of bicycle helmets. In addition, the lab tests lacrosse, equestrian and catcher’s helmets. Last March, results were released on the first ever research conducted on youth football helmets.
Once a hit occurs in a game, the sensors go off, and the sports medicine staff immediately starts concussion evaluation. Physical information is collected (symptoms, time span of unconsciousness, doctor’s official diagnosis, etc.) and brought to the biomechanics folks who pair it with data from the accelerometers (what type and how many g’s was the blow). A data set results and becomes available to the public. Private companies can then use the results to design new helmets. The prototypes often given to the lab for testing and eventually the helmet will go to market. Virginia Tech, like any other team, has the option to buy them.
The NCAA and NFL also use the helmet data to facilitate changes in game rules. The Center for Biomechanics conducted a study on little league players and found that most injuries occurred in practice, not during the game. Why? Rules govern a game, but nothing governs the design of practice drills.
The historical perturbation was all but gone. A new sense of urgency to fully understand the prevention of head injury had moved in. In 2014, two likely powerhouses, the NCAA and the United States Department of Defense, established The CARE Consortium (Concussion Assessment, Recognition and Education). It was created to spearhead the effort to define the clinical and neurological characteristics of concussive injury. Since Virginia Tech was already sitting on a mountain of relevant data, it was selected to be one of six schools in the “Advanced Research Core.” Now there are 30 schools and more than 40,000 participants. Roughly 4,300 (and counting) concussions have been documented. It is the largest concussion research project to date.
This fall approximately 30 VT football players will wear a sensored helmet. “We still don’t have all the answers, but at least we’re getting good questions,” Goforth concludes. So the next time all of those shiny helmets hit the playing field, remember, it’s what shining underneath that, quite literally, counts.

Nancy Moseley is a freelance writer from Blacksburg who turned down the offer to try on one of the helmets in the lab. It’s a decision she regrets.