1 year ago
Matriarch of the Monarchs 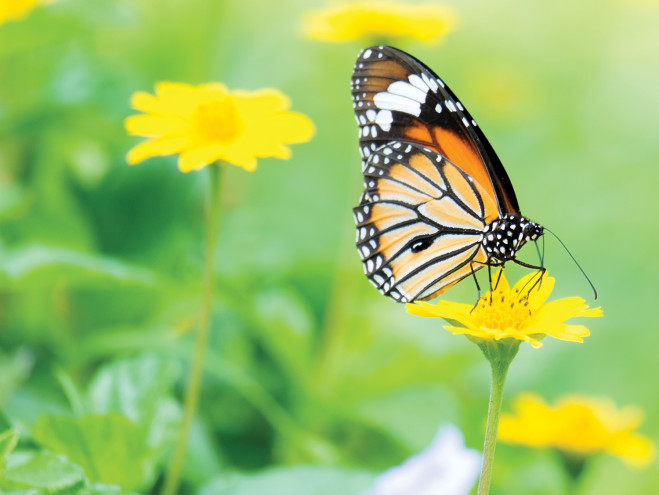 Thelma Kirkpatrick can be considered a matriarchal figure to the monarch butterfly. She takes great care to gently remove each caterpillar from the milkweed plants that line her driveway, cautiously placing them into tennis ball containers (one per tube) with a wet paper towel (not too wet) folded twice, then adding a milkweed leaf on top. Each tube is covered with a piece of pantyhose stretched tight and secured with a rubber band. Then there’s the watching, waiting and daily cleaning.
She did not set out to be the “monarch” of monarchs, rather, they found her. “We never bothered to mow our milkweed plants,” she explains. “I think they’re kind of pretty with lavender flowers in summer, and they smell good.” Since milkweed happens to be the only plant the monarch butterfly will lay eggs on, it’s no wonder the monarchs decided the Kirkpatrick’s residence was a good place to settle down. “In the spring of 2006, I noticed the tiny caterpillars on our milkweed leaves, but many of them were not surviving. They were being preyed upon by everything from ants to parasitic flies.”
Determined to help the caterpillars make it to their chrysalis, Thelma decided to bring them inside. Now, over a dozen years later, her backyard passion has become a full-fledged monarch-saving operation. Thelma’s husband, Roy, is fully on board. “When he goes checks the mail, he looks for caterpillars to bring in. Last year, we had 224 caterpillars that actually made chrysalis, of which 190 made butterfly and were released.”
Thelma’s concern is warranted as the Center for Biological Diversity reports that the monarch butterfly population is down more than 80% from the mid-1990s. The monarchs are under assessment to determine whether they should be placed under Endangered Species Act protection. Biologists cite deforestation in Mexico, severe weather, and the growth of herbicide-based agriculture destroying crucial milkweed flora in the Midwest as the three major factors responsible for the decline.
“When you can take a widespread migration of this sort and completely dismantle it as a result of human activity, it is deeply concerning,” says Lincoln Brower, a professor of biology at Sweet Briar College who has studied the monarch migrations for decades. “The monarch could simply be the canary in the coal mine.”
The monarch migration to Mexico is extraordinary. The 2012 documentary movie “Flight of the Butterflies” tracks the details of a 40-year scientific investigation into what is considered one of the longest insect migrations in the world. It spans several generations, with the fourth generation (late fall) being the one to make the journey to Mexico. Although most adult monarchs live only a few weeks to lay eggs, the monarchs that migrate to Mexico can live up to nine months.
After wintering in Mexico, they journey north, during which they find mates in the spring, lay eggs, hatch caterpillars and become butterflies, continuing the cycle for three more generations into the fall, and battling everything from birds and cars to hunger and hurricanes. Embarking on such a miraculous voyage only to have your offspring fall prey to a backyard pest would be heartbreaking. Thelma and Roy have taken matters into their own hands to ensure a successful journey.
“I even bring in eggs and let the caterpillars hatch out inside if I can spot them. They are about the size of a pin head,” Thelma relates. With so many perils waiting to befall the monarchs, the 190 successful butterflies raised last summer is nothing short of a miracle.
“Some eggs are infected by parasites before even hatching, and we can see the holes. And sometimes a caterpillar makes chrysalis, but a larva eats the inside of it out, and instead of a butterfly emerging, a fly will come out,” Roy adds. There is also the delicate process of a butterfly unfurling its wings after emerging from the chrysalis. “The butterfly begins pumping fluid into its wings. We can watch it unfurl, very wet and flexible like a paper towel being unfolded. When it is dry and the wings start opening and closing slowly, I know it is ready to go. I place it in the sun, hold out a pencil for it to grip and then gently place it on a sunflower.”
One newly hatched butterfly circled back and landed on Thelma, perhaps saying: “Thank You!” And why not? All August and September Thelma spends an hour each morning and evening going through every container, carefully removing the caterpillar, cleaning out its tube, replacing the paper towel, adding a new leaf and putting the caterpillar back. She keeps a calendar of notes where each one is in the process — from black and yellow caterpillar to the hardened green chrysalis to the translucent grey when she can see the pattern of the butterfly’s wings inside.
Thelma doesn’t leave the house with any on the cusp of hatching for fear they could beat their wings too much inside the tube and do permanent damage. Once they open their wings, it is easy to sex the butterflies. The male has a little black dot on each wing and the female does not. Last year they counted 100 females and 60 males. The Kirkpatricks make an impressive impact on the monarch butterfly population. And it’s safe to say the monarchs have had a big impact on their lives as well.