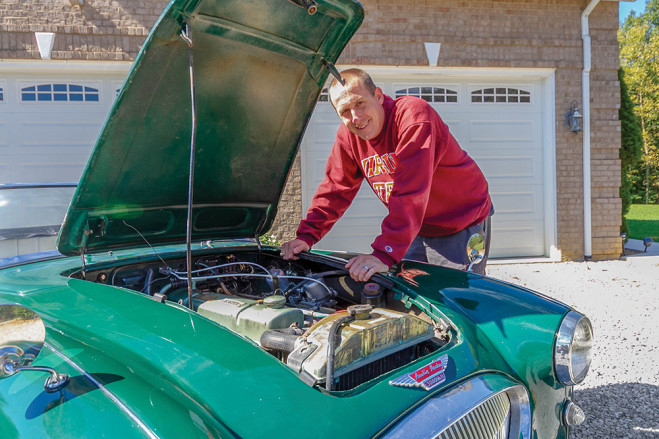 Adolescence is a formative time, filled with indelible moments. Like careening off the road when the right front shock mount of your 1963 Austin-Healey 3000 MK II BJ7 breaks, sending you through three fence posts, snapping the car’s frame and impacting every part of the vehicle.
If you’re Mike Abbott, when that happens (as it did to him in 1989, when he was in high school near Charlottesville), you convince your father not to part out the car but instead to commit to a complete restoration. Two and a half years later, the sportster was back on the road, and soon afterward Mike enrolled as an undergraduate student at Virginia Tech, studying mechanical engineering and driving the Healey around the New River Valley. The car still has an early 90’s-era VT commuter parking sticker.
Abbott has put more than 60,000 miles on the car since he and his father, David, put it back together. “I see no point in having a car if you’re not going to drive it,” he says. This past winter Abbott tore into the car again to rebuild the Healey’s drive train. The car’s left front shock tower was showing fatigue failure and also needed its camber adjusted. It’s easiest to fix those things when the drive train is removed, so he decided to redo the drive train, too.
The Healey is what’s known as an LBC – little British car. It’s a two-door RWD sports convertible with a manual four-speed overdrive transmission and an overall length of just over 13 feet. It’s not wide – when you sit inside it, the interior door panel is very close. But the car is swift, thanks to its 6 cylinder, 3.0L engine. Abbott’s Healey is a nearly stock MK II BJ7. One notable modification is the addition of a high-speed rear end (stock for non-overdrive versions of the car) that allows a much more enjoyable drive on today’s faster highways.
The car is painted British racing green and sports wire wheels. It also has rollup windows – the first Austin-Healey to have that feature. Previous versions had side curtains. “Back then sports cars weren’t supposed to have roll-up windows,” Abbott relates. He is planning to take the car to a show this spring with his father, who has his own Healey, a 1964 3000 Mark III. David bought his car in 1967 and finished restoring it the same year that Mike’s 1963 went through the fence. Over time, David bought another Austin-Healey – a 1961.
“We have a problem when it comes to British cars,” Abbott reveals. In addition to his Healey, Mike owns a 1963 Mini Cooper, which he rebuilt last year. It had been modified for racing and ran hot, causing a hole to blow in a piston. He also has a 1964 Jaguar Mark II 3.4L right-hand drive, and nothing has ever been done to it.
Though the Healey has been restored, it is original, with one exception – it has electronic ignition instead of points. Comparing the cars, Abbott observes: “Men like the Healey, women like the Jag, and everyone laughs at the Mini – it’s a clown car.” He even keeps a clown nose in the glove box of the Mini for passengers to wear.
Another comparison: “The Mini handles the best, the Healey is the fastest, and the Jag you can drive cross country.” Abbott does use a lead additive in fuel tanks of the Healey and the Jag.
After his undergraduate years in Blacksburg, Abbott worked in product development outside the area. He did earn a master’s degree and moved back to the NRV in 2006. Today he works as an innovation consultant for large businesses. Since moving back, Mike has restored one American car – a 1964 Corvair Monza. If you know the car, you know why Abbott would have worked on it – its styling has similarities to LBCs. “I just love British cars because of their design,” he says.
He also loves working on them and has in his garage a 1969 MGB. Built for racing, Abbott is restoring it frame-off, having had to install new floor boards. When it’s done, he has a 1971 Triumph TR250 to restore.
What comes after that, Abbott’s not sure. Possibly whatever LBCs his own sons decide they want to work on. He is sure, though, that he would never sell the Healey. “This car,” he declares, “is not a car, this car is part of me.”