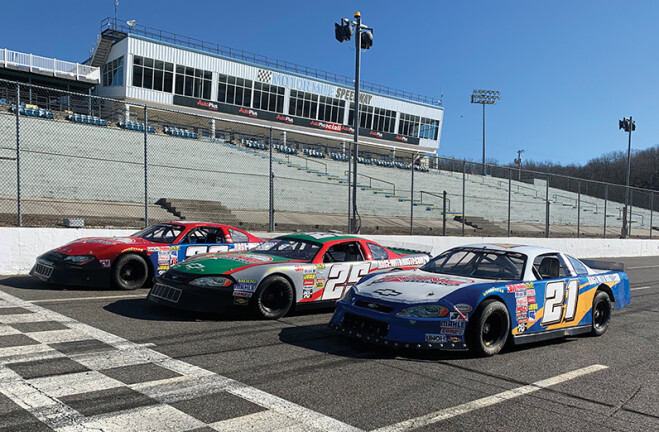 In 1952, the New York Yankees won the World Series over the Brooklyn Dodgers 4-3; and on the car front, the first Corvette prototype was finished and shown the next year at the General Motors 1953 Motorama show in New York City.
Just four years earlier, in 1948, the newly formed National Association for Stock Car Auto Racing (NASCAR) hosted its first race at Daytona Beach. The winner, Red Byron, began racing before serving in World War II as a flight engineer on B-24 Liberator bombers. Not to be deterred by a war injury, Byron raced and won until health issues forced his retirement from the driver’s seat in 1951. He remained active helping others in the auto racing realm.
While these events were monumental in different ways, on the local New River Valley scene, a naturally-shaped, dirt, oval piece of ground on a farm in Pulaski County began hosting car races. Many a weekend evening was spent under the stars, driving, fixing, watching, cheering and enjoying the sound and the scene. Fast forward to 1988, and the track is paved, has had several renovations and re-opens as a NASCAR-sanctioned race track.
Just over six months ago, Motor Mile Speedway joined forces with Rusty Wallace Racing Experience [RWRE] to enhance and expand the race programs and entertainment options, adding “& Dragway” to the name. It is now the home track for the Rusty Wallace Racing Experience.
“The dragway has already hosted a couple of events, and our Pure Speed Drag Racing Experience is just getting started,” says Mark Ebert, president of RWRE. “We are so excited to have taken over this amazing facility. With the addition of our go-karts and driving experiences, this may well be the most interactive motorsports facility in the world right here in the New River Valley.”
NASCAR champion Rusty Wallace has been inducted into the NASCAR Hall of Fame, International Motorsports Hall of Fame and Motorsports Hall of Fame of America for his stellar career. He began driving race cars in the late 1970s, making his NASCAR debut in 1980. While he has raced until a few years ago, Wallace also has enjoyed a broadcast career with ESPN and ABC. He made a cameo appearance in “Days of Thunder”, the 1990 movie starring Tom Cruise. Wallace is enthusiastic about making the once-dirt oval in the New River Valley his new base of operations.
“Motor Mile Speedway & Dragway is one of the finest grassroots facilities in the nation,” Wallace believes. “The opportunity to call this amazing short track home for our more advanced programs has us primed for 2021.” David Hagan, owner of the track, is totally on board with the coming changes. “The vision offered by RWRE ensures that the venue will continue to build on its rich past and remain a leading motorsports destination for years to come.”
Giles County native Sabrina Sexton has been a car fanatic all her life. The first Christmas decades ago that she and her husband, Charlie, were together, she bought tickets to Rockingham [North Carolina] for their Christmas gift. “We went, and I was hooked,” she recalls. “My first visit to Talledega Superspeedway [Alabama] was thrilling. The cars are going over 200 mph. It sounds like a freight train on steroids and feels like the wind and air are pulling you out of your seat, and you’re rising up.”
Being a spectator at car races is not for the faint of heart. It is a heart-pounding adventure for the speed, the blended aroma of popcorn and gasoline and the collective roar of vehicles minus full mufflers. The fans are as varied as fingerprints, no two alike. They cross all age, socio-economic and demographic barriers, and people-watching can be as amusing as race car-watching. The benefit of being in the stands and not the pit in the middle is that you can see all the vehicles without spinning yourself like a top.
While the Motor Mile track permits one 6-pack cooler per ticket holder, half the fun is springing for the concession food and drink like hot dogs, popcorn, soda and beer, for the over 21 crowd.
The Sextons have been to races all up and down the East Coast. “It develops into a passion,” Sabrina explains. “You find a driver you like, follow him or her, buy the team shirts, a ball cap and other stuff. I feel like I’m a real part of the team when my favorite driver gets behind the wheel.”
“David Hagan has brought racing to life here,” she states of the owner. “The facility is top notch, and he’s spared no expense in the suites, adding the drag strip and other upgrades. The new RWRE team with its extensive racing experience can only add to the personality, amenities and attraction.”
“We can’t wait for Rusty and Kenny Wallace to join us this summer. Bobby Labonte and the SMART Tour will be here in the fall,” Ebert relates enthusiastically. “The new high speed go-kart track is open weekends. Add to that the NASCAR style racing experience going wide open for groups and individuals on the oval, and it’s an exciting time.”
Ebert and the entire RWRE team are courting not only regional race fans, but everyone. “Heck, we can’t wait to get non-race fans in here,” Ebert concludes, “so we can show them how much fun we’re having at Motor Mile Speedway & Dragway and convert them into race fans!”

RWRE is the largest racing school in the country, offering NASCAR-style driving experiences on more than 80 tracks. The North Carolina company was founded in 2005 and offers a diverse collection of driving schools. Among the coming-soon activities is the interactive opportunity for a racing fan to get behind the wheel of a NASCAR-style Late Model, rear engine dragster or a racing go-kart.
Seen on a race car trailer:

Life is not a journey to the grave with the intention of arriving safely in one pretty and well-preserved piece … but to skid in broadside, thoroughly used up, worn out, and defiantly shouting “wow, what a ride.”