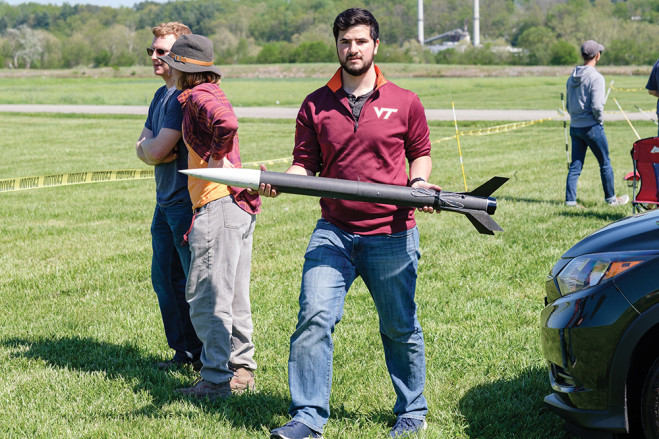 July 20 marks 50 years since the moon landing, but Bob Schoner is getting kids excited about the first footsteps on Mars. “It’s gonna happen,” Schoner says with confidence. “Somebody, maybe the next internet billionaire, will walk on Mars in your lifetime.” The kids’ eyes light up as they begin to realize the future is not just science fiction.
As the prefect of New River Valley Rocketry, Schoner lives for moments like this. “When a parent brings their young son or daughter to the launch site for the first time, and they fly a rocket together– there is just nothing like it.” Unfortunately, Schoner relates, it’s not as common as it once was. “There aren’t enough parents doing stuff like this anymore, and we are trying to change that.”
New River Valley Rocketry holds monthly, high-power launches at a local farm site, drawing onlookers and rocket hobbyists from New Jersey to Georgia. The club started with four people over wings at Bull & Bones in March of 2011. Tom Weeks (a.k.a. Tweeks), Kevin Shinpaugh and Monta Elkins got the ball rolling along with Schoner. They continue to attract people finding out about rockets or BARs (born again rocketeers) with memories of Apollo launches from their youth. The club is now some 60 strong.
Part of Schoner’s responsibilities as prefect is to certify people. “There are three levels of certification,” he explains. “For Level 1, one must build, fly and recover a rocket using either an H or an I impulse motor. That is the entry level into high power rocketry.” Impulse is the amount of thrust or power a rocket has, and the classification starts at A and then goes up in doubles, where B is twice as powerful as A, and C is twice as powerful as B, etc. The highest impulse motor you can buy without being a member is a G impulse, which will propel a 2-pound rocket to 2,500 feet.”
People can buy motors in hobby stores up to G impulse, which is about 4 ounces of propellant, but for anything over that, they need to belong to either the National Association of Rocketry (NAR) or Tripoli Rocketry Association. NRV Rocketry members belong to both organizations. “Technically, you could launch a 2-pound rocket with less than 4 ounces of propellant to 9,000 feet, but the odds of getting it back are pretty low,” Schoner says. People often ask whether the rockets come back. “Truthfully, anything we put in the air needs to have some kind of recovery device that slows it to a safe speed. Maybe 5% of the time recovery doesn’t happen, and it’s usually due to human error.”
The way larger rockets ideally work is that they have an altimeter measuring barometric pressure, and as the rocket goes up, the barometric press gets lower. Once the rocket gets to the top of its flight path and begins to descend, that pressure increases, which triggers the altimeter to send an electric signal that fires a black powder charge to blow out a parachute. Larger rockets have a small drogue parachute to allow them to fall faster but straighter. Then, when the altimeter senses an altitude around 500 to 1,000 feet above the ground, another signal is sent to fire a second charge to eject the main parachute to open and allow the rocket to land softly. Any rocket weighing more than 3.3 pounds must be approved by the FAA, and Schoner handles those approvals as well. “The waiver application process takes up to three months and is good for a year. We must call four airports before and at the end of each day’s launch.”
Not all members of NRV Rocketry are high power certified. Some have no desire to fly at that level, primarily due to cost. But there are several Level 3 certified fliers, which is the highest level the organization currently recognizes. Eric Patterson, chair of Virginia Tech’s Aerospace and Ocean Engineering Department, is a Level 3 flier. Patterson joined the group two years ago, and within eight months, he was Level 3 certified.
Schoner stresses that rocketry should be fun, and it must be safe. “Our safety code has been a really good thing. We have a Launch Control Officer making sure our skies and fields are safe, a Range Safety Officer inspecting everything from fins to parachutes and assigning launch pads, excellent PA systems, and we always launch everything electronically.” Schoner states that a wire (like in a toaster) heats up and lights a small pellet of propellant, and it can all be wirelessly controlled from 1000 feet away.
It takes five to 10 hours to build a rocket using a commercially available kit. Individual membership in NRV Rocketry is $20, and $25 for the whole family. Kids can always fly for free, and NRV Rocketry even has inexpensive “loaner” rockets they like to hand out on launch days to get kids excited about flying. For non-member, high-power fliers, the organization charges $10 per day to use its field and equipment. Spectators are free.
So, whether you’ve seen the rocket launch signs or are just learning about NRV Rocketry, spread the word. The organization hopes to be a strong resource for the NRV community through STEM education, church groups, cub scouts and more. The kids in school today are the ones who will design, build and pilot the spacecraft that will return to the moon and eventually journey to Mars. Residents and students with an interest in rocketry or STEM can bring their knowledge and passion into this exciting adventure.