3 years ago
Dubai: The Largest, Tallest and Greatest of Everything 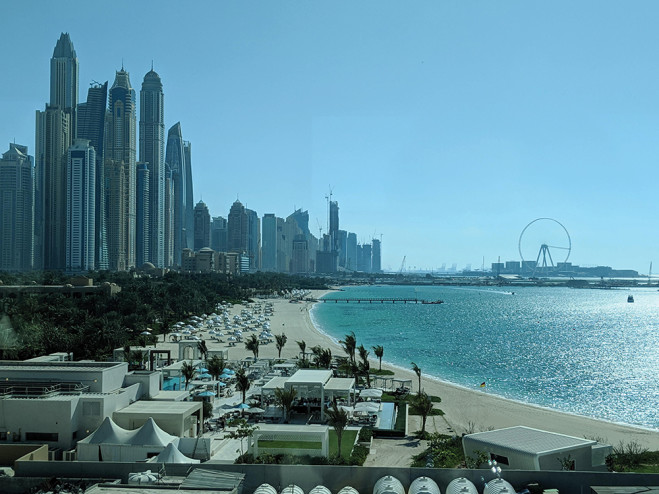 Not known to shy away from a superlative, the glitzy city of Dubai prides itself on being home to the largest, tallest and greatest of most everything. This luxury stopover for travelers crisscrossing East and West already possesses the busiest airport in the world and will add to its traffic when they host World Expo 2020 [see sidebar]. This global event takes place every five years and invites all nations to showcase groundbreaking ideas and disruptive innovation. It is slated to attract nearly 30 million people in the 6-month span between October 2020 to April 2021 – the largest World Expo yet, of course.
Despite growth everywhere, Dubai doesn’t feel crowded. The city, with a population of 85 percent expats and cultures from around the world, runs on efficiency and sophisticated infrastructure. People aren’t loitering, and visitors aren’t confronted with trash or typical city smells. Everything looks pristine – even the metro stations with their silver bullet-shaped shells are designed with clean lines and clean floors. Every building has a distinct style – kind of like fashion on a runway. And the people who live here protect their reputation. No littering, no bag-snatching, heckling or road rage – and you’ll never see a person drunk in public.
Dubai is one of the safest cities in the world and quite modern compared to others in the Middle East. Women drive pink taxi cabs only patronized by other women or families. The Emirati pride themselves on being culturally sensitive and inclusive – hiring people with special needs and referring to them as “people with determination” and giving them visible jobs and positions in management – also not common throughout the Middle East.
We weren’t sure what to expect when stopping for a few days before returning home from India. We knew it would be an easier pace from the hustle of New Delhi where street smarts and the ability to zigzag through traffic are essential for getting anywhere. By contrast, Dubai is amazingly orderly and easy to navigate despite its incredible pace of growth. Every time you visit, there’s something that didn’t exist before. This is the vision of Prime Minister Sheikh Mohammed, who is also the Emir of Dubai.
Islands are created out of sand in the sea – the latest in the shape of gigantic palm tree lined with mansions and large, luxurious malls. Protecting that enormous investment from waves and storms are seven million tons of mountain rock piled around the island to form a crescent-shaped breakwater.
We stayed at the Atlantis, the first resort on the man-made island known as the Palm Jumeirah. It is a replica of one in the Bahamas with a huge Dale Chihuly glass-blown sculpture in the lobby. My daughter loved the Ambassador Lagoon – a fish tank that could fill more than four Olympic-size swimming pools that, along with the adjacent aquarium, holds more than 250 species of fish. If you stay at the resort, you get free entry to Aquaventure, a waterpark and playground consisting of extraordinary rides, tidal waves and rapids.
The Atlantis boasts its own private beach facing the iconic Burj Al Arab (the sail hotel). That hotel is off limits unless you’re staying or dining there, and with room rates in excess of $1,000 per night, we chose to enjoy the view from the Atlantis. There we could see the Burj Al Arab, the famed Jumeirah Beach and Dubai cityscape without leaving the pool.
If you want to explore the city, being on The Palm doesn’t cut you off from all the excitement. A metro runs up the trunk of the Palm, collecting residents who live on the artificial island and whisks them to the center of the city for less than $4 – you can upgrade to gold class seats with free Wifi (Dubai always has VIP options for anyone who is willing to pay). Once in the city, you can hit the colossal Dubai Mall, the largest in the world, with 12 million square feet of shopping, restaurants, a separate town for kids called “Kidzania” and the world’s largest indoor aquarium. It even has an ice skating rink.
Adjacent to the mall is an outdoor promenade lined by more retail shops and restaurants. The entire complex encircles the 30-acre manmade Burj Khalifa Lake with a viewing bridge where you can look up 163 stories – more than 2,700 feet – to see the tallest skyscraper in the world, the Burj Khalifa. If heights make you queasy, save yourself the $160 ticket to the lounge at the top and book a reservation at Abd el Wahab terrace restaurant in the Souk Al Bahar. In the evening you can see the spectacular dancing fountains (think the Bellagio in Las Vegas) in front of the Burj Khalifa which has a music and light projection show on the side of the building beginning at sunset. There are more larger-than-life experiences to conquer such as The Global Village, a multicultural festival that lasts over 5 months, or Ski Dubai, an indoor ski resort with five runs including the world’s first indoor black diamond slope.
Outside the downtown commercial area you can explore the old-world Spice Market and Gold Souk by taking a boat from the Meena Bazaar and be dazzled by the endless rows of shops packed with 22 karat gold treasures. Or escape the concrete environment and book a camel safari to truly feel the natural elements of the Middle East. After all, beyond the glamour of the city, Dubai is still in the Arabian Desert – appropriately, the largest desert in Asia.

Krisha Chachra served eight years on the Blacksburg Town Council and has written for NRV Magazine for more than a decade. She is a community advocate & connector and runs an event production organization that hosts Up on the Roof. She writes the travel column for the magazine and occasional human-interest pieces. Kchachra@aol.com