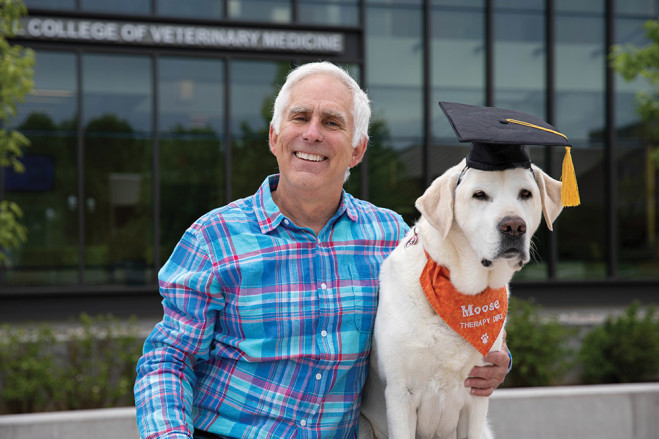 The use of animals for therapy is not a new thing. In fact, the first iteration of Animal Assisted Therapy (AAT) can be traced back to the ancient Greeks who used horses to lift the spirits of critically ill patients. The use of horses continued into the 1940s when the American Red Cross established a farm for rehabilitating veterans to interact with animals.
Even earlier, Florence Nightingale championed the use of small animals in the reduction of stress and anxiety in psychiatric patients in the 1800s. And Dr. Sigmund Freud believed that pets, specifically his dog, Jo-Fi, had a calming effect and could reliably intuit a patient’s true character.
Suddenly “man’s best friend” takes on greater meaning.
The first formal research of animals for therapeutic use occurred in the 1960s by Dr. Boris Levinson. Levinson found that mentally impaired young patients were more at ease socializing with his dog rather than other humans.
Trent Davis, Ph.D., a licensed professional counselor at Virginia Tech’s Cook Counseling Center, concurs. “For a lot of humans, unfortunately, other humans haven’t always been the best to them in their lives, so dogs can be a little bit safer,” he recently stated in a Good Morning America article.
The American Veterinary Medical Association defines the human-animal bond as a “mutually beneficial and dynamic relationship between people and animals that is influenced by behaviors considered essential to the health and well-being of both.” Now there are a bevy of findings emphatically pointing to all the ways animals contribute to our mental health and well-being. They are able to combat depression and loneliness in the elderly; they can instill bravery in children who have suffered abuse; they can quietly assist in hospice situations. Animals encourage social interaction and independence. They help increase our physical activity and decrease levels of stress. Having access to a fur friend is an automatic mood booster.
Besides the obvious benefits, using animals in therapy practices helps reduce the stigma of mental health, which is often seen as a weakness or a failure.
“The animal is very calming because they’re present. They reduce the stigma and popularize counseling. It’s cool to go to counseling because there’s a dog there. The positive association is inherent and powerful,” Davis says, whose dog Moose accompanies him pretty much everywhere. Dogs are a proxy to feelings, he adds. While it’s not always easy to show emotion in a vulnerable situation, it’s widely accepted to show affection and dote on a playful pup.
“People flock to the animals first. The benefits of an eventual therapeutic relationship is a secondary, subtle, byproduct. Dogs do a lot to engender trust,” Davis offers.
Therapy dogs differ from service dogs who are trained specifically in one area of service for one person. They also differ from emotional support animals who are not required to carry any type of certification. Therapy dogs are specifically trained to reach out to anyone in the community, either alongside a counselor in a private practice, or by visiting retirement communities, hospitals, grade schools or public libraries.
Jonathan Tate, the life enrichment manager and volunteer coordinator at Warm Hearth Village says: “When we have the pets come, and we have had all kinds from dogs to cats to even a therapy ferret, it puts a huge smile on the residents faces. A lot of laughing, grinning and giggling.”
For children who have trouble reading, there are a number of programs that give students the opportunity to read to a therapy dog. It’s a playful, peaceful way to encourage practice with language. Dogs are just happy to have someone pay attention to them. They are not judgmental like fellow classmates may be.
Jan Stice has worked with Pet Partners, a leading international organization for improving human health and well-being through the human-animal bond, for a number of years. She has been an active volunteer with various dogs throughout the New River and Roanoke valleys. Pet Partners trains, tests and registers therapy teams which consist of a handler and their pet.
One of the first things a therapy team evaluator looks for is a solid execution of the basic commands. Another major checkpoint is whether or not the animal is good in public. They need to be safe, predictable and reliable, especially since therapy environments can be quite the opposite. Conversely, the handler needs to exemplify control of the animal. The term ‘team’ is a big deal. “The handler has to know the dog, and the dog needs to have confidence in the handler. You want to see a team, not just a trained dog,” Stice asserts.
“There are so many ways the dogs help. So many ways they encourage people. Something about feeling that fur, it’s magic. It really is,” concludes Stice. It’s hard to ask for much more in a best friend.

Nancy S. Moseley is a writer from Blacksburg whose dog Dee Dee is way more attentive when read to than her two squirmy boys.