2 years ago
Family Legacy Lives On 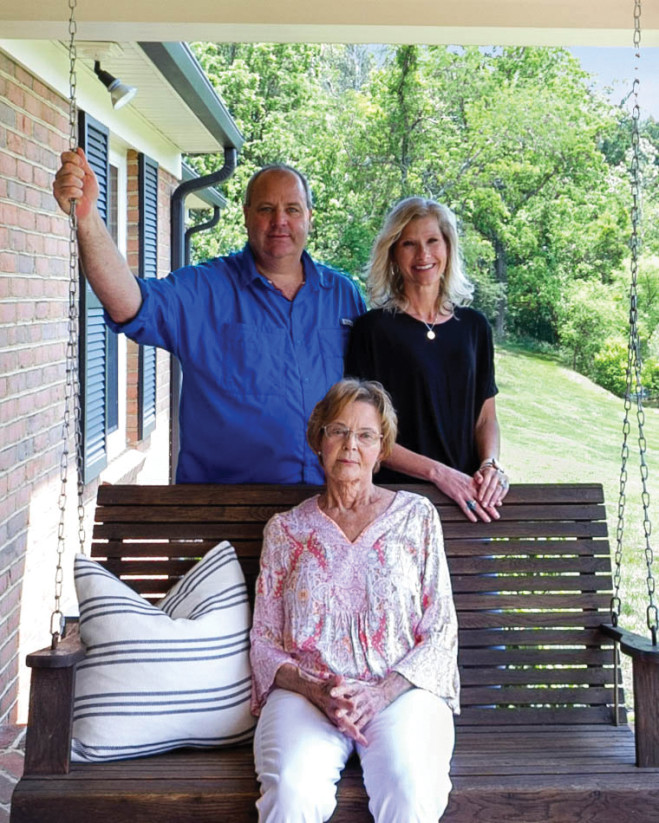 The Armentrout homestead in the New River Valley is a testament to the past, a model for present and ideal for the future. Preserving the legacy of his father and both of his grandfathers has been a driving force for Mark Armentrout and his wife, Karen, since moving in three years ago.

Mark’s grandfather, Mark Kirby, after whom he is named, owned this land with his wife, Ruth, and owned the local pharmacy, Radford Drug. An avid horseman, Kirby had the white barn constructed in the 1940s for his beloved Tennessee Walker Horse named Naughty Anne. His daughter, Shirley, married Mark’s dad, Bill Armentrout, and they decided to build a house and raise their family here.
Mark grew up in this place, the youngest of three boys, and attended Radford High School. In the pre-cell phone age of the 1980s, teens met one another cruising around Radford and Fairlawn and hanging out in the McDonald’s parking lot. It was on this incredibly unromantic chunk of asphalt that Mark met Karen, a Pulaski native who went to Pulaski High School. They married in 1993, and Mark moved out of his family’s house.
When the couple purchased the property and moved back in with their three children in 2017, it had been 24 years since the one and only renovation. Back then, his parents installed two recessed skylights in a newly expanded living room and added an office area, pantry, new kitchen floor, a basement entrance, vinyl and aluminum soffits, leaf guard gutters and new roof. “The basic floor plan of the kitchen and dining area remained unchanged,” Karen relates. “As the most commonly used spaces, we decided to open it up and make some changes.”

Calling in Interior Designer Edith-Anne Duncan was brilliant, as she has a keen eye and extensive experience in evaluating and renovating space in her mind in a way that makes the most sense. “From her first visit,” Mark elaborates, “she totally changed our direction and thought process. Within minutes, she was able to save us huge expenses on the project. The original kitchen and dining room had a wall dividing the spaces. That wall was removed as well as a large window and wall that separated the dining room from the sun room. This opened up the entire area into a vast kitchen with copious eating, relaxing and entertaining space.”
Having grown up in this house, Mark has a strong sentimental attachment to the property, along with walnut, cherry and cedar wood collections cut and milled decades ago by his grandfather. Both Mark’s dad and his dad were fine carpenters. “Every square inch of the walnut was used in the kitchen. The specially-crafted wood shelves and a tall, handsome, glass-front cabinet add warm wood accents in the mostly white space,” he adds. “With the awesome 100-year-old pharmacy display cabinet (which was in the basement) along the dining room wall, we have successfully tied both grandfathers to this modern kitchen and dining room.”
“We did most of the work ourselves,” Karen says of the dust-filled weeks of having much of the house torn up . “And many wonderful local NRV contractors contributed their expertise with professional skills we do not have.”

“My mom, Shirley Armentrout, lives just up the road, and I consulted her often throughout the planning and the process. I value her insight and affirmation that how we approached things would have met with my late father’s approval. Honoring his woodworking heritage and superior carpentry skills was an important consideration,” Mark declares.

With an extravagant kitchen, family spaces and entertainment options worthy of the cover of House Beautiful Magazine, it’s the family heritage angle that captures the Armentrouts the most. The handcrafted swing on the front porch was built by Mark’s father, an exact replica of one his grandfather had built. It is oak from fence rails which used to encircle the 11-acre property.
The barn and hay loft are in original condition, and a handmade set of wood dominos is on display in the living room. “I love the white kitchen and having had the double fireplace [which opens to the living room and the kitchen dining space] bricks painted white on the kitchen side. There is so much room and so much function here, some mornings I have to pinch myself to realize it’s real,” Karen smiles.
“Seeing Mark and Karen beam with pride and enjoying their family home is wonderful,” relates Edith-Anne Duncan. “It has been a privilege as an Interior Designer to create these bright, expansive, contemporary spaces in a house that means so much to them.”
Modern high end appliances like the Wolf 6-burner gas range, along with new cabinets and counters, a wet bar, wine cooler, sophisticated pendant lighting and the generous center island with seating deliver a casual elegance for kitchen flow. Natural daylight streams into the entire area for an unparalleled blend of inside and outdoors. Views from the sunroom or front porch over lawn and pastures offer a pastoral serenity that will both wow and quiet visitors and family for generations to come.