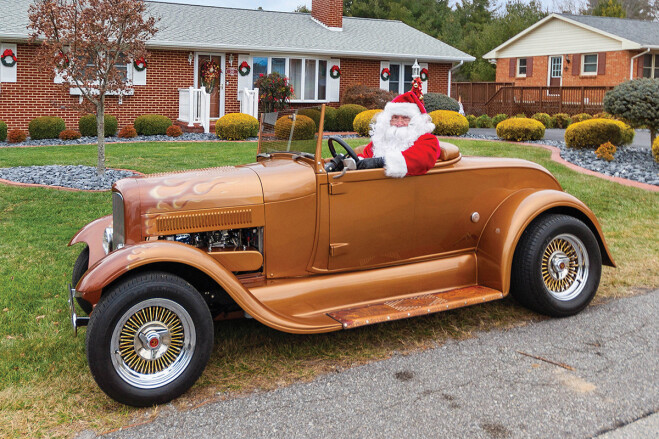 When kids ask the Hot Rod Santa “Where is your sleigh?” and “Where is Rudolph?”, he looks around and responds: “They are still in the North Pole because there’s no snow here yet.” This seems satisfactory to the young ‘uns whose faces light up at the sight of Santa Claus smiling and waving from his metallic copper rocket sleigh.
Other faces which light up often come from men. “I don’t think most men enjoy going shopping,” states Wayne Akers, who has offered holiday cheer from a classic car for more than a decade. “The scowl on their faces turns to a delightful smile when they see this 1928 Ford roadster cruising along.”
Akers has had several street rods over the years, and this customized vehicle was purchased from the Volo Auto Museum outside Chicago. “I was attracted to the color, art and leatherwork,” he relates. “The seats are saddle leather with real cowhide inserts. The paint flames in front and art on the trunk are airbrushed, plus there’s a matching 2-wheel trailer in the same motif with more artwork.” A previous owner had the art insured as well as the car. All the leatherwork took two years.

The original 1928 roadster version rode “on a 103.5-inch wheelbase chassis supported by transverse leaf springs front and rear. Four-wheel mechanical brakes provide stopping power to the gloss black, wire wheels and wide whitewall tires. The engine would have been a 201 CI 4-cylinder L-head, backed by a 3-speed manual with a centered floor shift.” [medum.com] As a customized car, this one has lots of updates like the 4-cylinder early 2000s Pinto racing engine. Jack Roush of NASCAR fame built racing engines, and though Akers has no proof, he has heard and believes that this engine was one of Roush’s. “It has a 4-speed manual transmission, but I never shift out of 3rd gear until 65 mph,” Akers explains. “It’s like a rocket sleigh for power.”
Akers is a native of the New River Valley, having grown up in Dublin. He served 24 years in the U.S. Air Force, is a Vietnam veteran, and went on to work for Montgomery County Schools, retiring as a head custodian. “I sought out a job with no management or supervision, but did end up being responsible for a bunch of people. I may be more busy than ever now, but I have retired on my terms.”
Hot Rod Santa starts driving around shopping centers in Christiansburg on Black Friday and, weather permitting, cruises all around until Christmas Eve. While he loves his Western-theme rocket sleigh, Akers plans to sell it. He fell in love with a true Model A, a Cabriolet painted maroon, akin to one of the Hokie colors. If there’s no snow next year keeping the sleigh and Rudolph in the North Pole, you might see Santa Claus around those shopping centers in his newly acquired 1931 classic.