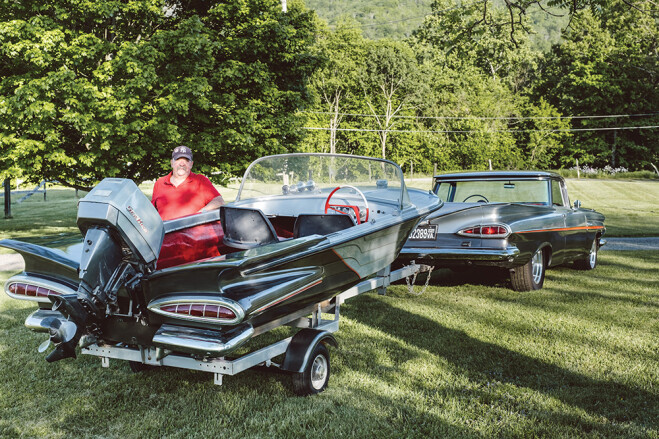 The first response to Donnie Martin’s idea of retrofitting his motor boat with some fins and tail lights to match his 1959 El Camino was met with: “Are you crazy?” Donnie’s response was this: “Well, probably, but I like to do things differently.”
Admittedly, it was a pipe dream for sure, but, hey, Donnie is in the plumbing business. He knows lots about pipes – real ones and the dream kind. “After some cutting of furring strips, sheets of Luan plywood, fiberglass matting and resin, along with some PVC pipe, we had this project well under day,” he glows.

The Chevrolet El Camino was produced in 1959, 1960 and 1964 to 1987. It was Chevy’s response to Ford’s Ranchero, a combo car-truck with a car front interior and back pick-up truck style bed. The vehicle is officially classified as a pick-up truck, and similar models built on a car chassis were the “roadster utility” or “roadster pick-up” trucks manufactured in the 1920s.
The early El Camino adopted the mid-level Bel-Air’s trim for the exterior and the low-end Biscayne on the inside. One conjecture on poor sales was seating, as only three people could fit into the front seat, and there was no back seat. The vehicle endured many variations and upgrades inside, outside and under the hood.
It was discontinued in 1987, shortly before Ford’s F-150 became the best-selling vehicle of all time, so far. Certainly, El Camino (and Ranchero) lovers would lay claim that these car-truck combinations paved the way for the wild popularity that pick-up trucks now enjoy.

Donnie is a Giles County native who has always loved old cars. His first buy was a 1937 coupe when he was 16 years old. Later, he accepted the “hand-me-down” 1960, 2-door, hard top Buick from his parents. He still has the Buick with its red interior, fender shirts and all the bells and whistles that make it a cool car.
“After college, I bought a used 1968 Chevelle Super Sport. My girl friend at the time helped me pay for it, and her money was not lost, as I’ve been married to her 50 years and still have the car, which runs and looks great!”

Donnie drives his 1968 Super Sport El Camino sometimes. He also owns a blue 1971 4-speed and a 1974 classic. But he likes the ’59 the best, which had towed his motor boat before the light bulb in his head thought it would so very cool to retrofit the boat to match the El Camino. “It has always been a great conversation piece, drawing a crowd wherever we go,” he relates. “We’ve taken it to several car shows and were even on local television in Nashville, Tenn.”
But his biggest adventure in the spotlight was being featured on the nationally-produced Speed Channel (which closed in 2013). “That was exciting! Lots of folks have told me they saw my El Camino and matching boat on TV.”
The vehicle sports a 400-cubic-inch small block motor, 4-speed transmission and all gears in the differential. “A complete refurbish of the El Camino and boat has recently been finished,” Donnie explains. “It has a new paint job and disc brake conversion which makes it fun to drive. I have put on 17-inch tires and wheels. The dash, gauges and Impala steering wheel maintain the original look.” Donnie thinks the dash is one of the prettiest every produced.
An Impala grill guard has been installed. “These guards are rare and very expensive. All the ’59 Chevys, except ones sold in California, came with a 2-piece front bumper and 3-piece back bumper. The bucket seats are from a 1963 Impala and make the ride quite comfortable. The 4-speed with Hurst shifter and T-handle makes shifting gears fun.” His wife, also in her 70s, loves to drive it, too.
Wherever they go, they get a “thumbs-up” from people who see the matching, 2-tone, silver-gray car and boat. El Camino, a versatile vehicle, one which Donnie never gets tired of looking at, driving and showing.