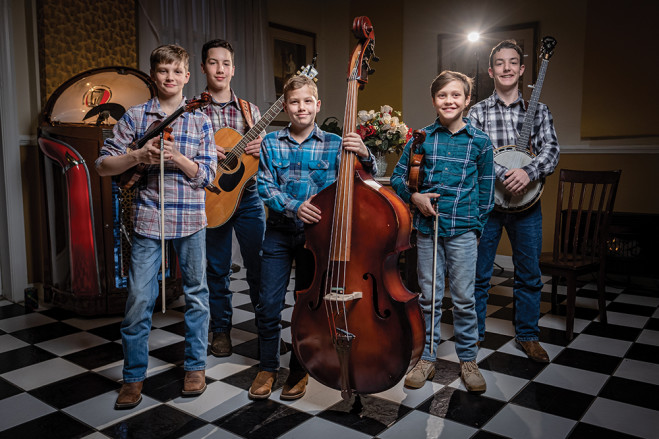 Locally, it is a well-known fact that if one is interested in taking in some of the bluegrass music scene, you had better head over to Floyd on a Friday night. Or, you may want to go down to Galax and see what is going on there. A lesser-known venue for local bluegrass music is found in Narrows near the western edge of Giles County. While Giles is recognized for great paddling, fishing, hiking, a certain waterfall and the movie, “Dirty Dancing,” it is not the first place that comes to mind for bluegrass music, yet. There is a small, dedicated group of local folks and kids who would like to change that.
MacArthur Inn, named after the famous WW II Pacific theater general, hosts local musicians every Thursday evening from 6 to 9 p.m. They gather for dinner and then play old-time and bluegrass music next to the restored 78 rpm jukebox in the parlor. On the third Thursday of the month, it isn’t just the old-timers showcasing their skills. It’s “youth night” from 5:30 to 6:30 p.m., and these kids are already quite accomplished.
Two families of brothers are actively working on taking their skills to the next level. The McGlothlin brothers of Narrows, Max and Sam, have been playing together for several years. Max, 15, has been playing fiddle since the age of 4 and playing gigs since he was seven. His younger brother, Sam, has joined him, and the two switch back-and-forth between the fiddle and guitar.
The Albert (rhymes with TALL-bert) brothers, DJ [age 15], Sam [14] and Shane [12] also play bluegrass. The two families have been working to combine forces and are beginning to meld into something of a band. D.J.’s specialty is banjo, while his brother, Sam (aka Big Sam) plays guitar. Shane is the newcomer and has been playing bass about six months.
This entire endeavor has been nourished and, in a way, curated by the McGlothlin brothers’ maternal grandfather, Dave Lloyd. Back in the day, during Dave’s entrance exam into Virginia Tech, he was told that his aptitude for music was greater than his aptitude for engineering. He was more confident in his ability to earn a living as an engineer than as a musician, so he went in that direction. But he took the information to heart, enrolled in fiddle lessons and kept fine-tuning his music.
Many years later, his grandson Max came along, and grandpa Dave and little Max began playing music together. Max initially took an interest in the fiddle and later began to take lessons. Weekly, he would travel an hour to West Virginia to take fiddle lessons from none other than Lewisburg’s own Adam DeGraff (see sidebar). He and brother Sam have been taking these lessons for several years.
Another contributor to the boys’ progress has been Radford-based New River Community College engineering instructor Jeff Levy. He works with the boys on more nuanced aspects of music, such as listening to others, generosity, ensemble, coherence and transposing songs to other keys. Clearly, he enjoys his time with the young musicians. Through his guidance, they have been learning to improvise so that, even though they might not know a specific song called in a jam session, they can still play around the melody using the chord changes of the song.
In our modern era, it may come as no surprise to hear that pursuing a discipline such as music that requires, well, discipline, is not so popular among a younger population which can be heavily invested in cell phones, social media and video games. The boys all report having difficulty talking about musical matters with their friends and peers. But, on those occasions when they do play for their local school, it really does connect with other kids. This occurred recently in the fall talent show sponsored by Shelor Motor Mile. The boys did well at their school show and were sent on to the regional competition. Again, they did well there, but did not win. They hope to fare better next year. One of the highlights of their experience at the competition was actually offstage — they were able to spend time before the show jamming with other contestants.
All of the brothers — both McGlothlin and Albert — are active students, athletes and avid hunters. Music, however, has brought them together. They are interested in learning how far they can go with it, but so far are not thinking of making music a career move. They hope to enter some competitions in the coming year, but are generally taking life a day at a time. They would like NRV Magazine readers to show up Thursday nights. You can listen, tap your toes and/or bring along an instrument and join the jam.
Adam DeGraff is an American violinist, composer, producer, educator, and farmer. He spent the first part of his career as a first-chair, professional orchestral musician. Since then, Adam has been experimenting with rock violin, live looping, alternative music education, and traditional permaculture farming practices.

Text and Photos by Kevin Riley