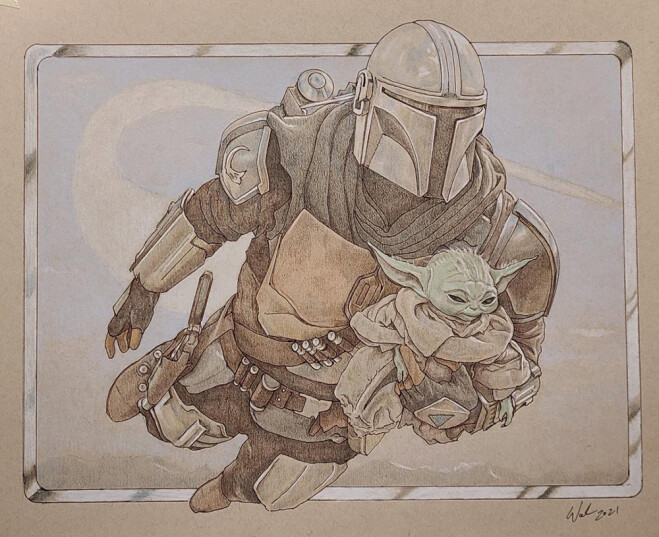 For Mike Wade, the memory of first falling in love with art is as vivid as a 64-pack of Crayola crayons. Though he was only 5 years old, Mike recalls going to the local five & dime store with his grandmother, Ada, like it was only yesterday. “She bought me the nice pack of crayons, you know, with the sharpener in the back?” And a coloring book of zoo animals. “My grandparents didn’t have much, so it was a very special outing.”
When they got back home, he remembers watching in awe as his grandmother colored in a picture of a flamingo, using different hues of pink, shading techniques and highlights. “It was a work of art. I was completely blown away.”
As it turns out, Mike would come to discover that artistic talent was indeed a family trait. One that he, too, possessed. “Dad was also very good at it, but he just doodled here and there. I still have a drawing of The Incredible Hulk he did for me when I was 7, sketched on notebook paper.”
Born and raised in Giles County, Mike’s talent started to get noticed in grade school. He continued to pursue art in high school, where his art teacher, Susan Shaw, recognized his skill and recommended that he attend Concord College, just as she had. He followed her advice and studied graphic design and commercial art at Concord University.
Though Mike had the aspiration – and the talent – to become a full-time Illustrator, life took him on a different course. He spent eight years working for a local newspaper in Giles, moving up from proofreader, to writer, to editor. He changed direction and has worked for NRV Community Services as its public relations manager ever since.
He turns 51 next month, but he has always kept his pencils sharp. “Sketching has become the Batman to my Bruce Wayne,” Mike says. The comic book analogy is fitting because the DC Comics and Marvel superheroes inspire some of his favorite sketches.
But they don’t even hold a “lightsaber” to Star Wars. “Star Wars is my absolute favorite thing. I grew up on Star Wars and have a deep connection to the series and the shows and basically everything Star Wars-related,” he relates. “I remember the summer of ’77, going to the Pearisburg Drive-In and watching the very first Star Wars movie ever released,” which was the fourth film chronologically. “I’ve been hooked ever since.”
The highlight of his career thus far happened when he donated a drawing of Sir Alec Guiness and R2-D2 to a local NRV Cares auction, which was later posted on Twitter. Somehow, along the course of the Twitterverse, the drawing got noticed by Luke Sykwalker himself (Mark Hamill) and Hammill replied to the tweet!
Mike would have been “ecstatic with maybe just a like or a heart” but Hamill took the time to comment on the work and offer his input and praise. As his own biggest critic, Mike puts everything he has into each piece. If he doesn’t feel good about it, it doesn’t go out the door.
“Being an artist is equal parts insecurity and equal parts ego. You gotta have the confidence to put yourself out there, but you’re also keenly aware that there are others out there, better than you.”
As Mike’s artwork has started to get more recognition – which is always a rewarding feeling — at the end of the day, it’s about having fun. Along with private commissions, Mike also does fun things like “Sketchy Saturday,” a weekly free art giveaway on Facebook (Mike Wade Art) that he started early during the pandemic to “give folks something to look forward to which that wasn’t heavy or sad, just a lighthearted way to bring a smile.”
Anyone who liked and commented (and tagged two friends) was eligible. He’d give a sketch away on Friday and start a new one the next day. He did this for about a year. “Yes, it was great exposure, but more importantly, it was great fun for the community, not to mention therapeutic for me.”
An 11”x14” sketch probably takes Mike about 15-20 hours to complete. He likes to work late at night after his wife has gone to bed, or early in the morning. He has now started doing a “Drawing of the Week.” From pencil portraits of loved ones, to pop culture icons, Mike keeps himself very busy with these weekly sketches. He takes suggestions from Facebook fans and posts his lineup for fans to see, so they can put a payment down and claim their favorite piece ahead of time.
Though it is nice to get paid for his efforts, he also learns a lot along the way.
“I am fortunate to have a creative outlet. But the true reward comes from seeing people’s reactions when I present them with their art. Sometimes they are speechless, sometimes they cry.”
Mike’s own emotions were stirred when he learned that Valerie Perrine, who starred in the first Superman film with Christopher Reeve, is suffering from advanced Parkinsons. Upon learning this, Mike donated a drawing he did 10 years ago — of Christopher Reeve as Superman — to assist with her care.
The sketch is one of his very favorite pieces to this day – and somehow it never sold!
“I nailed it, too,” he declares. “Sometimes it takes me 6 or 7 tries to get the expression right, but this one was spot on right outta the gate!”
When asked where to see his art locally, Mike laughs: “Well my wife gets on me all the time to sketch something we can hang up on the wall here at home! But everything I do seems to go right out the door and into another home.”
He has plans to broaden his artistic horizons upon retirement, and for now, has a modest goal of 1,000 likes on his Facebook page. Let’s help him get there!

Written by Emily K. Alberts, who realizes that her superpower might just be writing about other people’s superpowers.