5 years ago
When Beer and Art Collide 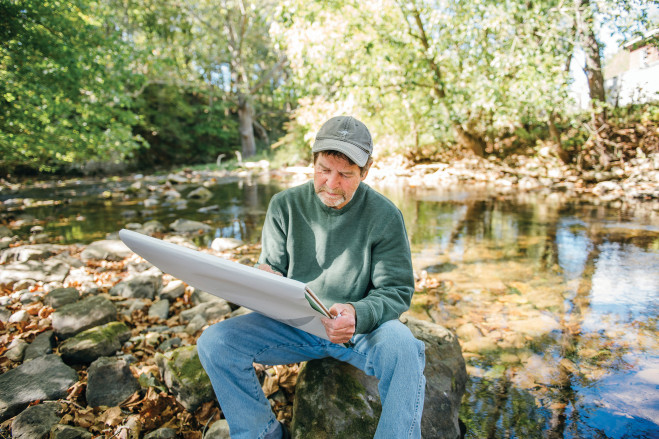 So imagine as a college student at the Pennsylvania Academy of Art, you drop into a bar for a beer one afternoon after painting away part of the day with friends at Brandywine Battlefield. It’s not a fancy place, kind of dimly lit with a horseshoe bar on a concrete floor. A man and some dogs enter. He chooses the bar stool between you and a friend and orders a shot and a beer. So, this is sounding like a corny joke, right? No joke.
Within 20 seconds you realize that the newcomer is none other than Andrew Wyeth, perhaps the most famous U.S. living artist at the moment. You don’t want to say something foolish, so for a minute or two, you don’t say anything at all, even pretend like you don’t recognize him. But, it’s a bar, and conversation flows. It was the first of many 10-minute conversations with Wyeth, a realist painter who, like Walt Hewes, painted the land around him.
Hewes drew like all children draw, but in high school in Newtown Square, Penn., the passion for art kicked in, and it’s never left him. In the early 1980s, he visited a cousin who owned the [now closed] Newport Hotel in Giles County. Like many people who visit the New River Valley as tourists or students or to see family, this artist came, fell in love with the area and never left.
He has moved a few times in and around Newport across some 30 years and now resides in a small place on Walker Creek where his kitchen doubles as a studio. But Hewes much prefers plein air painting, working outside with a sketch pad or canvas in his lap and his faithful dog, Traveler, nearby. “Many places in Giles County captivate me,” he explains. “I go back at different times of the year. Castle Rock, Clover Hollow, Eggleston, the New River. I live 50 feet from Walker Creek and 200 yards from where it flows into the New River, so I have painting subjects galore right around me. There’s always something different to see in the same place.”
“He is known as a documenter of the region,” says Sarah “Pippi” Miller at Miller off Main St. Galleries in Blacksburg. “Hewes often paints abandoned buildings, which are no longer standing a few years later.” Along with Robert Miller, her father and founder of the business more than 40 years ago, Sarah revels in every painting that Hewes delivers. “We have published 80 of his best works into a series of limited edition fine art prints. Collectors insist on being called when a new painting arrives, and one out-of-state patron treasures the pencil drawings. They are exquisite for detail and shading when you consider it is all done with a lead pencil.”
Hewes is inspired by traditional painters like Wyeth, Winslow Homer and Edward Hopper for their style and the way they see things. He shies away from commissions. “Basically, I end up doing things I’m not excited about, and sheer enthusiasm is a huge component of success in art.” He’s done a little wood carving, but usually gives that away to friends and devotes his serious time to watercolor, pastel and pencil for his main work.
“Hewes is one of the premier New River Valley artists,” relates Ed Lawhorn, NRV Market Executive with Union Bank. “The bank purchased four of his original watercolor paintings in the mid-1990s. Two of those ~ the Historic Smithfield Plantation house and Solitude ~ have been donated to Historic Smithfield for its art collection. My wife, Karen, and I have one original among six framed limited edition prints in our home. He has a real gift for capturing the serenity and natural beauty of rural NRV places.”
One has to wonder if Hewes himself wanders occasionally into a local bar where a Virginia Tech or Radford University art major is enjoying a beer and would just love a 10-minute conversation with a successful NRV artist whose style follows loosely in the brush strokes of Wyeth, Homer and Hopper.