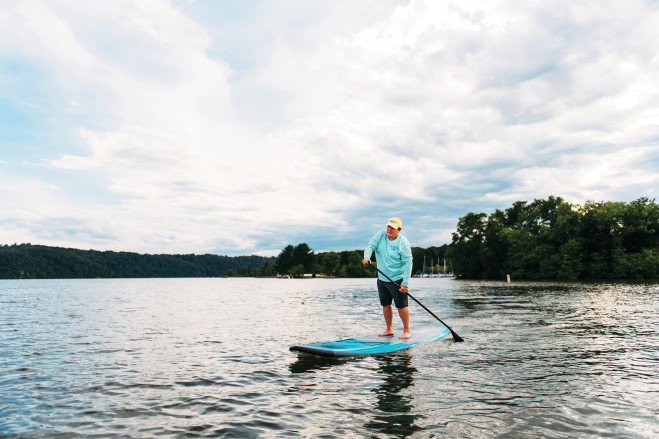 They range from riverside to lakeside, from the edge of the coast to the top of the mountain, all carefully corralling the natural and historic wonders that surround Virginia residents. The Commonwealth is steeped in diverse geography and reverent historic events, and our award-winning state park system (National Gold Medal Award, 2001) masterfully packages it all up, puts a gatehouse out front and enthusiastically welcomes us in.

Thirty-seven strong, there are state parks that highlight:

In 1933, President Franklin D. Roosevelt was visiting the Virginia mountains near the future Shenandoah National Park. He solicited thoughts on his newly created Civilian Conservation Corps from William E. Carson, then chair of the State Commission on Conservation and Development. Carson opined that CCC men were doing good work on federal lands, but might be better suited to develop a system of state parks. Roosevelt agreed to give the Commonwealth muscle and material from the CCC if Virginia could demonstrate to the rest of the nation the benefits of such a park system.
In less than a year, Virginia capitalized on Roosevelt’s offering and opened its first six state parks: Douthat, Fairy Stone, Hungry Mother, Seashore (now First Landing), Staunton River and Westmoreland.

Tucked in Southwest Virginia sits Claytor Lake State Park, the New River Valley’s locally lauded state park. The lake itself was formed in 1939 when Appalachian Power Company completed a hydroelectric dam on the New River. It was named after William Graham Claytor, who served as both vice president and director of Appalachian Power.
Many years later, Mr. R.G. Stevens, president of the Radford Chamber of Commerce, led the charge alongside local citizens for development of a state park adjacent to the lake. In 1947, $10,000 in federal funds was procured along with 320 donated power company acres. Shortly thereafter, 117 additional acres were purchased from the Howe family, whose original homestead serves as the park’s offices and visitor center. Adjacent to the Howe House stands the reconstructed stone chimney from the 1771 home of Colonel William Christian. Christian (for whom Christiansburg is named), resided in the colonial era settlement known as Dunkard’s Bottom, named after the first white settlers of the area in the mid-1700s. Lake waters flooded the settlement and all remaining structures except the chimney, which was saved by the Count Pulaski Chapter of the Daughters of the American Revolution.
Officially dedicated in 1948, Claytor Lake State Park is unique in that it’s one of the smallest in size (472 acres), but top five in revenue and top 10 in attendance (270,000+ in 2017). It was also the first state park created solely by the initiative and determination of the local community.
Chris Doss has been the park manager at Claytor Lake State Park for 7.5 years. “We’re small, but we offer everything that any other park has. We have the public beach area, and we offer water sports, mountain biking, camping and interpretive programs,” Doss states. In the near future, he hopes to capitalize on the “glamping” trend by adding four yurts.
The park has even caught the attention of Bucknell University’s rowing team. Every year they escape frozen conditions in Pennsylvania to stay in the cabins and use the lake for their winter practice intensive.
Behind the scenes, there is a huge effort to protect and preserve existing natural resources. The park works diligently on habitat management by holding regular sessions of underwater aquatic vegetation planting in the coves. And if you don’t feel like decorating the curb with your retired Christmas tree, donate it to the park. After the holidays every year, they submerge donated trees to enhance fish and reef habitats.
As an additional method of conservation, AEP regularly drops the lake level down to give the park and private homeowners a chance to inspect docks and stabilize various structures. However, during the drop, thousands of indigenous mussels become exposed on the shoreline. The park hosts a day where volunteers, adults and kids alike, walk the shore and return the mussels to their underwater home.
“One of my favorite parts of being a park manager,” Doss concludes, “is watching young people grow up in the park; seeing them enjoy it in different ways year after year.”
Most public libraries across Virginia, including the Montgomery-Floyd Regional Library, participate in the Nature Backpack program. The backpack is available to check out and includes a weeklong park pass and relevant activities to complement a child’s experience in the park. Promoting an early interest in the natural world will directly affect the sustainability and future success of state parks everywhere.
Finding a way to tap into that childlike wonder, at any age, is probably exactly what Roosevelt was betting on when he challenged Virginia to lead the charge for a greater state park system. As it turns out, now with more than 80 years of experience, he tasked the right people with the job.

~ Catch the boat-launched fireworks show at the summer festival (June)
~ Rent a bike and bike the
seven miles of trails
~ Test your balance skills in a paddleboard yoga class with
Mountain2Island.com
~ Take your kids for a hike on Shady Ridge Trail, a designated TRACK Trail Adventure hike (kidsinparks.com)
~ Register for the Claytor Lake Sprint Triathlon (September) or the
Claytor Lake Ness Monster
Obstacle Course Race (April)