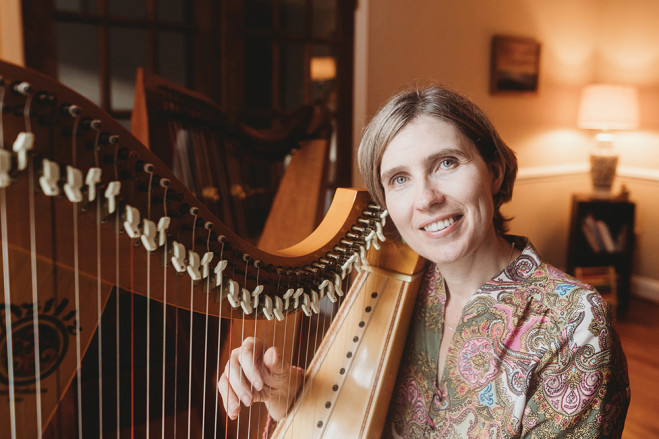 Pop-culturally, harp music tends to cue up an upcoming dream sequence. The lights soften, the visuals swirl, and we’re transported to fantasyland. When Kirsti Kaldro of Bridge Kaldro Music in Christiansburg first encountered a harp, it was, actually, pretty dreamy.
“While I was waiting for my sister-in-law to meet with an instrument maker in Bedford, I stepped into an adjoining room and saw all the harps. It was one of those moments when time stops. I was transfixed. They were all so beautiful,” Kaldro remembers.
She grew up in Maine singing folk songs around campfires and landing lead roles in high school musicals. She studied music performance at Berkeley College of Music in Boston, then at the Conservatory of Music at Brooklyn College. Music was omnipresent. “After graduation, I started teaching voice and piano lessons. My husband taught guitar lessons, and that’s what Bridge Kaldro Music was in the beginning.”
The two also spent time volunteering at a local hospital. “Ed would play the guitar and I sang,” Kaldro reminisces. It was the first time she engaged with music in a medical setting. “It led me to a different experience of the function of music. I was performing music to its fullest purpose for me.”
Ten years and four children later, the Kaldros “spun the globe” and relocated to Blacksburg as a family-friendly place to grow their business. Shortly thereafter, she had that kismet harp encounter in Bedford. In 2008, she attended a church music conference and signed up for the Introduction to Harp course. She continued lessons from local harpists, and a year later crossed the milestone of commitment and purchased her own instrument.
“At first I was very reclusive, playing for my own enjoyment in my room. But it became stagnant, and I wanted to do outreach with it.” Through the harpist community she heard about Christina Tourin, founder and director of the International Harp Therapy Program. It is conducted virtually through instructional videos and Skype lessons. Kaldro has a mentor with whom she can discuss ideas about music technique and therapy at any time. Tourin operates on a 5-point star of education: repertoire, improvisation, composition, arranging and technique.
Upon graduation, Kaldro will be a Certified Therapeutic Harp Practitioner and can play in hospitals, assisted living facilities and hospice environments. The unofficial motto of Tourin’s program is “a harpist in every hospital by 2020.”
But why is the harp, specifically, so unique when it comes to music therapy? “When you play a harp string, it vibrates as a whole to give you the base, or fundamental, tone. It also vibrates in parts at the same time, creating different overtones, which is what gives the sound its character,” Kaldro explains.
This is significant for healing because the fundamental tone will vibrate and act on the physical body while the overtones work on an aura. Patients hear sympathetic vibrations from other strings at the same time. The resulting sound produces its own kind of energy. In the program, students are trained to put their own issues aside and be hyper-observant of their surroundings. They are taught how to be on a constant feedback loop with the patient and make adjustments in the music accordingly.
“We play prescriptively, trying to tune in to where the person is in the moment. It’s very centered on the patient. We try to feel their mood and use our skills and intuition to figure out what music or tone is going to help them,” Kaldro says.
Music in major keys has been shown to increase immunoglobulin levels (antibodies), though any key that is favorable to the listener will increase immunity because of music’s ability to mitigate stress by lowering cortisol. When people listen to music they like, it can increase biochemicals that trigger feelings of euphoria. And in the Newborn Intensive Care Unit, monitors reveal increased oxygen levels in babies while harp music plays.
“It can also change heart rate and blood pressure,” Kaldro adds. “For someone with fast, struggled breathing, I might start playing at a tempo that matches the breath, then play slower to bring it back down.”
Therapy harps have 24 to 27 strings, compared to pedal harps with 40 to 47 strings. This contributes to portability and being less intrusive in hospital spaces. A smaller harp also lets a patient interact by strumming the strings (officially called a glissando), which can be as effective as simply listening.
Ultimately, Kaldro concludes, moving through illness and healing is a process. Human beings are ever-changing works-in-progress, and music can be the ideal companion on that journey. For something that is cliché’d as inciting fantasy, the harp can be surprisingly quite the opposite. Its ability to keep people grounded, peaceful and feeling at home in their own bodies is perhaps the best medicine available.

Nancy S. Moseley is a freelance writer from Blacksburg who was delighted at the opportunity to hear Kirsti play her harp during the interview.