Love is always a central theme in weddings, but for Brogan Dinger and Nathan Shifflette, it went beyond the love they had for each other to include their families, their community and its economy and the environment. Nearly every decision was braced by the questions: Who will this help? [and] What won’t be hurt?
It started by deciding to have the wedding on the family farm, continuing a family tradition and allowing Brogan to be photographed with her horses. Nathan, who met Brogan on a photo shoot at the Berkeley Plantation, proposed to her at a very scenic spot on the property, and that’s where some other pictures were taken.
“It wasn’t easy, because the farm was NOT a wedding venue, yet,” says Dianne Dinger, mother of the bride. But with the help of creative community friends, they were able to achieve the vision of Rivendell that Brogan wanted. Some notable contributors are: 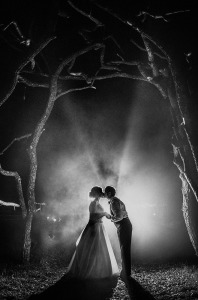 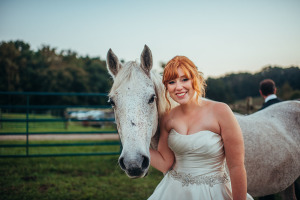 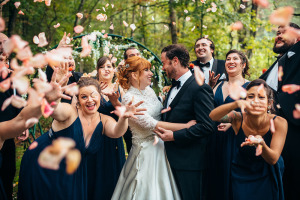 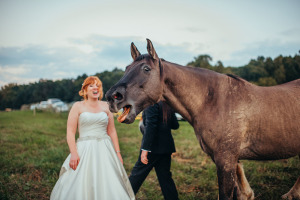 Recycle, reduce, reuse was apparent in many decisions for the wedding. Cloth-covered hay bales which provided seating for guests at the ceremony were later moved to the barn to feed the horses over winter. The entrance arch was made from old doors and architectural elements from an old house on the farm property. The arbor in the ceremony area, created by Amish craftsman, will be donated to become part of the Pearisburg Public Library’s Secret Garden project for young readers.
The reception bar was crafted from trees cut on the farm by the groom and his father and now stars as Brogan and Nathan’s dining room table top. The wedding dress came from a store established by the Central Virginia YWCA that gets its inventory from designer and bridal salons. They sell at drastically reduced prices and use the proceeds to fund programs that help women and children.
It takes a village to raise a child and to help her get married. Brogan used as many local vendors as she could. The wine came from Beliveau Winery in Montgomery County while the groom and the bride’s dad and brother made the beer. The potted plants and pumpkins were supplied by Giles County High School’s horticulture class and The Green Market. Stonecrop Farm in Newport supplied the flowers and crafted the arrangements. Blue Ridge Mountain Catering, a local NRV firm, prepared the food, and the Palisades Restaurant was the site of a pre-wedding dinner.
Brogan showed a whimsical side as well. Instead of the usual wedding cake, she and Nathan fed each other bites from the Chicken Wing Tower Cake, made by her sister with chicken wings smoked at Fat Back Soul Shack. She got that idea from a wedding show on TV. “Nathan and I looked at each other, laughed and agreed that when we got married, we would have a chicken wing cake.”
Brogan advises new brides to check the calendar carefully for competing events. It turned out her wedding was the same weekend as a Virginia Tech football game and she had to warn her guests to book hotel rooms very early to ensure a place to stay. Luckily, local friends offered rooms in their houses, found houses to rent, and there is a campground close to the farm where folks who didn’t get a room could stay.
She did not have a wedding planner, so Brogan depended upon lots of help from friends and family to attend to all the details that made her wedding so beautiful. “They were the cement that helped us pull everything together. We think everyone felt a sense of purpose in assisting us to create memories that will last a lifetime.”