8 months ago
The Spunsters: Lovers of Fiber Arts 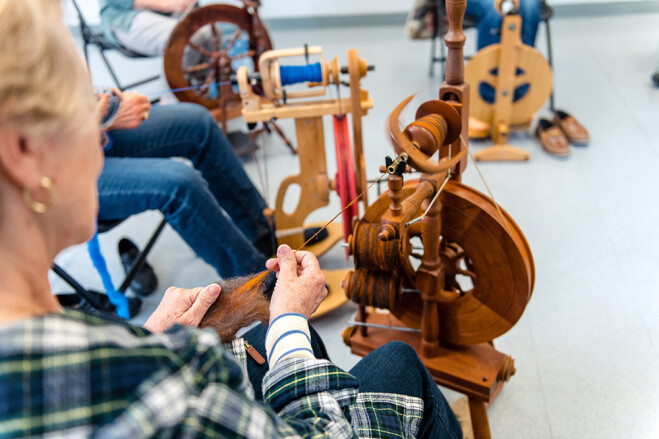 There is much to recommend fiber arts as a creative outlet. It has the vibrant colors of painting without the mess of cleaning brushes. It won’t cut or burn like stained glass, and it won’t dry out your hands like pottery. In fact, if you are working with a fleece right off the sheep, you will get your lanolin in spades. For these and many other reasons, a group of New River Valley ladies get together to share in this endeavor, calling themselves the Spunsters.
The group started after a spinning class was offered at the Y back in the early 1990s. They enjoyed each other’s company very much and loved spinning together. It turned out, there was a group that met at night, and some joined them. As more retired, they started meeting in the day time. At first, the Spunsters met in private homes, and then in library community rooms. Since the library did not allow long-term reservations, they went back to home visits until discovering that the Blacksburg Rec Center allows that. Thus, every Thursday that the rec center is open, these friends meet to spin, knit, crochet, weave, trade ideas, get help with problems, discuss books they’ve read and maintain long-standing friendships.
It is this social attitude that delights Joanne Lisa-Strauch. She learned to spin in New Jersey before she and her husband, Otto, moved to Craig County. In Bergen County, N.J., she drove 45 minutes to join a group. “I brought my spinning wheel, and they looked at me like I had two heads. ‘Aren’t we spinning here?’ I asked. ‘Oh no, we’re having a program about [something else], so you go home and spin.’ ‘What about help?’ I inquired. ‘Oh, we’ll critique it.’ You know what?, I thought, I have my family for that.” For her, the Spunsters here is always full of good ideas and willing to help anyone; it’s like the antithesis to the N.J. group.
Ann Catlett had not considered a spinning class, but a friend wanted to do it and asked Ann to go with her. In the end, the friend did not like it and Ann loved it. She kept taking classes and eventually came to the Spunsters where she is a regular at the meetings, working on her orange sweaters.
It was her animals that motivated Laurie Lee into the fiber arts scene. She has had as many as 40 goats on her Riner farm. As a child, she helped her aunt with stray creatures who came into their care. Sustaining a back injury when she was young that immobilized her led her to needlework and fiber arts. When she left Texas to move to Virginia, she stocked her farm with goats and rabbits so she would have the mohair and angora yarn that are her favorites. Laurie Lee loves the Zen quality of spinning, which can soothe a troubled soul and “you have a finished product when you’re done.”
Rebecca Hunt-Ford wanted an alpaca hat, but the alpaca yarn was expensive, so she learned to spin. She was able to use fiber from a friend’s father who raised alpacas. After watching some YouTube videos, Rebecca not only built her own Navaho spindle, but also spun the alpaca fiber for her hat. As she quips, go big or go home.
“I got so excited that I contacted Smithfield Plantation to see if they had an opening for someone to do spinning demonstrations. I thought that was the coolest thing. Plus I am more than happy to dress in period clothes, except in summer; I don’t know how those women survived in those clothes on hot days,” Rebecca relates. “It was a holiday weekend thing, so I showed up for that and while doing a demonstration, I met Jennifer Newcomb who suggested I join the Spunsters. And I’ve been coming ever since.”
While stopping at the rec center to pick up her grandson’s artwork, Rhea Epstein received an invitation to join the group also from Jennifer. Now Rhea has her own wheel and is creating the yarn for her knitting projects.
Jennifer is a long-time Spunster, since 2005, and recruiter extraordinaire. She has always knitted or crocheted, and she thought it would be interesting to take the process from the very beginning, minus the animal care, so she took a 6-week spinning course and was hooked. “I love fiber arts,” she says. “I find it relaxing and challenging creatively. It sparks my imagination. It’s refreshing to be able to sit with a group of talented women doing the same thing. It’s always inspirational.”

For help, instruction, inspiration, fellowship and a good time, stop by the Blacksburg Rec Center some Thursday afternoon and give it a spin with the Spunsters.