1 year ago
The Snow Plowing Season 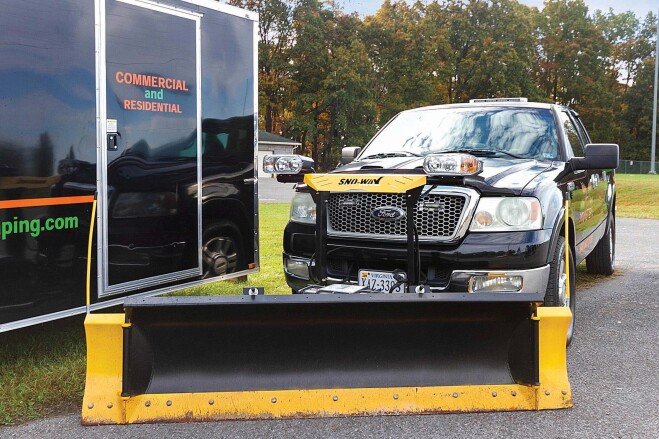 What’s a Mow Monster to do come winter? Why, push snow of course! Mike Alderman, Jr., established Mow Monsters as a lawn care service in 2013, three years after returning home to Pulaski County. In seven years, the lawn care business has grown from one yard to 90 accounts. This past summer his team of eight employees were mowing 150 acres a week.
His snow clearing business has similarly grown. At first, he was pushing and clearing residential driveways as a way to keep some of his employees working during the winter months and to provide a service to the community. The snow plowing side of the business has expanded, and today Alderman also takes care of commercial accounts – banks, big retail stores, auto supply stores, churches, apartment offices, medical centers.
Alderman uses two snow plows, both made by Snow-Way. An 8’2” wide hinged plow is attached to Mow Monsters’ 2004 F150 pick-up truck. A 9’ 6” wide v-plow, new last year, can be affixed to the company’s 2014 RAM 2500. During mowing months, each truck is used to haul a trailer full of lawn care equipment necessary to outfit a 4-man team.
The hinged plow is a straight plow with flaps at either side which – via a remote control operated from the cab of the truck – can be moved forward to corral snow and prevent it from windrowing off the edge of the plow. The v-plow is also operable with remote control.
Both trucks also have on their rear a salt spreader controlled from inside the truck. To protect the trucks from the ill effects of salt, Alderman sprays the bottom of each one with a lubricant which helps repel the salt.
Mike takes pride in how his team pays attention to detail. “Customer satisfaction is important to us,” he says. “The business is only as good as the employees – and we’ve got some great people.”
One of those people is Mike’s father, Mike, Sr., who works full-time for his son as a crew foreman since retiring from the Pulaski County Sheriff’s Office a couple of years ago. His wife, Ashley, also plays a big role in administering Mow Monsters’ operations.
Mike first started in lawn care when he was growing up in Pulaski County. Then he went to Eastern Tennessee State University. After graduating in 2005, he worked in the mid-Atlantic as a biomedical engineer. He still works that job, just now from home in Pulaski. He’s able to juggle the duties of a full-time job and Mow Monsters thanks to the efforts of Ashley and his hard-working crew, which takes care of customers from Christiansburg to Max Meadows. Their biggest account includes 48 acres of mowing.
In season, Mow Monsters typically operates two teams of four workers, two people driving mowers and two people working weed trimmers or backpack blowers or hand blowers. They mow 32 weeks a year, and offer aeration in the spring and fall, mulching in the spring, leaf pickup in the fall, and soft services like trimming bushes. They do not perform hardscaping. For fertilizer, they have a partnership with TruGreen.
For equipment they use Stihl trimmers and blowers and Scag mowers. They have four zero turn 61” Scag Cheetah commercial mowers, which have fuel injected 37hp engines capable of moving at 13 mph.
“It’s a really nice mower,” Alderman explains. “They mow and drive really well and are built with a suspension platform so everything – the feet platform and seat – bounce with the mower. That way the driver’s body isn’t bouncing as much.”
The Cheetahs have dual fuel tanks capable of holding 12 gallons of fuel. The mowers have three blades each, which in the summer are changed three times a week. The trailers Mow Monsters use are outfitted with the tools and spare parts necessary for the operation – spare belts, spare tires, jacks and impact guns. They change the oil in the mowers every 50 hours.
The trailers are distinctive for their Mow Monster images on the outside – a pair of orange eyes on a black background, about to take on a swath of growing grass. That marketing – on the vehicles and trailers – is the advertising Mow Monsters has used to grow so far, along with word of mouth and Facebook. “I hope to continue to grow methodically,” Mike says.
Thanks to Mow Monsters and its trucks and plows, many people in the New River Valley will be able to move around a little easier this winter. After all, ‘tis the season for snow, and therefore, plowing.