2 years ago
The People’s Pharmacist 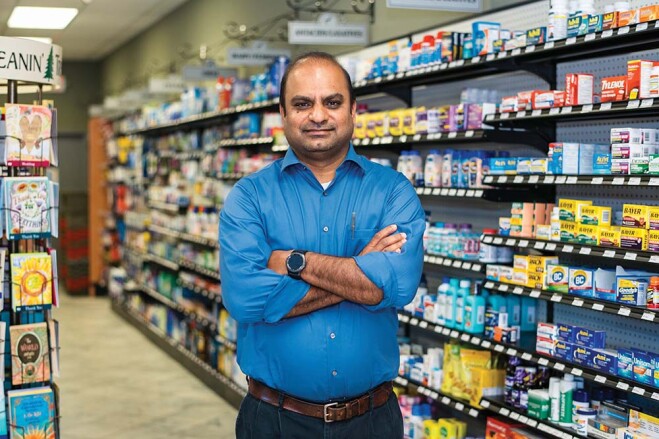 You won’t find cosmetics, magazines or greeting cards when you go into Senthil Marimuthu’s pharmacies in Blacksburg and Christiansburg. What you will find, in addition to any medication you need, is an attention to detail and a commitment to service that could be considered concierge-worthy. If Terry and Joe Greadon hadn’t already co-opted the title, Sen, as he likes to be known, could be the People’s Pharmacist. As it is, he thinks he’s just doing his job by carefully looking after his customers.
Sen’s path to the New River Valley is relatively straightforward. After finishing his undergraduate degree in India, he came to the University of Rhode Island for his postgraduate pharmacy degree in 2002. At the completion of that he found an internship at the Rite Aid Pharmacy [since closed] in Blacksburg and came here in in 2003.
Like many who come to the New River Valley find out, it is a hard place to leave, though it took Sen a little longer to come to that realization. When he finally took time to check out the area, he was delighted. “I really didn’t have a big plan, and this was the first opportunity,” he says. “Once I explored, I found Blacksburg has everything you need, but on small scale. I’m here for good.”
There was a shortage of pharmacists so the internship turned into a real job quickly and by 2004, he was the assistant manager. He spent weekends helping out at other Rite Aids in this district, from Pulaski to Galax and west into Princeton and Bluefield. It gave him extra money, more experience and a community of colleagues he could call on later in his career when he left the chain.
Burned out on his work schedule and not finding the right motivation from Rite Aid, Sen decided to strike out on his own. He opened Blacksburg Pharmacy on North Main Street down the sidewalk from Food Lion in 2014. It was a scary time. “If no one shows up in that first 30 to 45 minutes, you’re freaking out,” he relates. “You’re sure you’re going to go under, you’re always nervous, you want to be right.” But after two hectic years of on-the-job training, learning from his mistakes and honing his business and work philosophy, Sen felt like he had made the right decision.
Sen saw many customers
making the effort to come from Christiansburg to the Blacksburg Pharmacy location. He correctly anticipated growth in that market, so two years ago, he opened Christiansburg Pharmacy on Franklin Street. While Sen spends most of his time in Blacksburg, he stops in at the Christiansburg location every day. He is confident that the staff there provides the same level of service because they have all worked with him at the Blacksburg site and know his values. In addition, Sen is looking into opening a third location in Shawsville.
His philosophy at every store is one of consummate service to the customer. Sen offers vaccinations and flu shots, as well as the usual array of over-the-counter medicines, supplements and therapy items. Deliveries are free in the area, and there is a drive-through window. He sells pet medicines and does compounding which involves reformulating medicines, e.g., turning tablets into liquids for easier ingesting or changing the strength of a commercially available product. He can use an active ingredient within a commercially available item to customize a medication for a patient, or make a concoction of something not commercially available but which the doctor thinks could help a patient.
Where Sen and his staff excel is in helping customers navigate insurance issues and find the prescriptions that best fit both their medical and financial needs. He does this by being part of the doctor-patient team. Dr. Matthew McCarthy explains: “They have been fantastic about patient advocacy. The pharmacy works very hard to find alternatives and ways to save money. That goes a long way for my patients. As physicians, we’re sort of systemically blinded to what some of these medications cost.”
McCarthy also appreciates the free deliveries. “I do a lot of house calls for elderly shut-ins in Blacksburg who cannot get out. So let’s say, I’ll be there at 11 a.m., we’ll talk through the medicines and then the pharmacy will come by at 3 p.m. to drop them off,” he states. “People are blown away by that level of care.”
Sen sees it this way. “Across the board, people are coming in with certain expectations and they’re not looking for quick answers, they’re looking for solutions. I think that solutions are more important than answers.” For providing information and good results, Sen has earned the loyalty and support of his customers for which he marvels. “ It’s the people. You make a huge difference, and you don’t expect gratitude for it but the gratitude from people humbles you.”