2 years ago
The Magical Guy 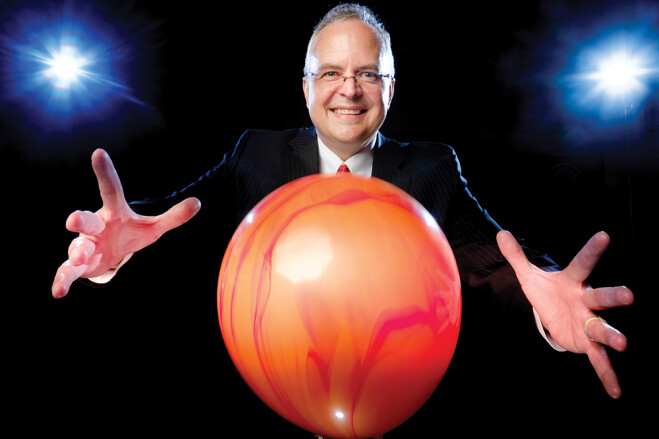 Imagine a hobby that can teach you to read, and years later, pay your way through college and law school. Magical thinking? No, just ask Bobby Lilly, Commonwealth’s Attorney for Giles County and also, magician extraordinaire.
“It started with kindergarten Show & Tell,” he says. “I purchased a magic set with money I got for my 5th or 6th birthday. When the little magic set arrived, I couldn’t read the directions, so Dad would help me learn one trick. He read the instructions onto a tape recorder. I ran the tape back and followed the pictures and that was part of how I learned to read.”
He practiced all week and on Friday he performed the trick in kindergarten Show & Tell. The next week, the process started over again with another trick. When his teacher asked him to do a whole show, he said he had already shown his class all his tricks. She responded that the show would be for all the kindergarten classes in his school ~ and the miniature Houdini was born.
Just before he went into high school, Bobby attended a magic summer camp where his counselor, a graduate of the Ringling Brothers Clown College, taught him some basic balloon twisting techniques which he added to his show. “I learned how to make a lot of different animals, all from the basic dog form: a dog with a long neck, that’s a giraffe; a dog with a big nose, that’s elephant; a dog with long ears, that’s a rabbit,” he says.
Attending national and international conventions put on by the International Brotherhood of Magicians (“We’re the other IBM,” he jokes) became the annual vacation for the Lilly family. Bobby entered performance competitions and at one in New Orleans, he came in second for his age group, as judged by David Copperfield, among others.
At another convention in Austin, Texas, Bobby got to meet and work with Tom Myers, a legend in the balloon twisting world. “It was amazing to see,” he recalls. “It wasn’t just using one little balloon to make a simple animal, they were using multiple balloons to make more complex creatures and hats and large sculptures.” Myers also hosts the Twist and Shout balloon conventions, several of which Bobby attended, and he is an inventor, coming up with an overgrown bicycle pump the size of a fire hydrant. It revolutionized the balloon act because the magician could pump up a balloon instead of blowing it up, making it possible to keep up the patter with the audience while performing. Besides, as Bobby says about inflating the long skinny ones: “Those balloons can be brutal.”
Early in his performance career, most of Bobby’s show would be magic with only little balloon art. As his skill with the balloons grew, so did their presence in his act. That also provided special opportunities, such as the time in Rochester, N.Y., when he was invited to join 74 balloon artists from seven countries. In the course of four days with 55,000 balloons, they built a five-story tall Jack and the Beanstalk. Discovery Channel Canada covered the event, and YouTube has several views of the creation.
Doing magic shows was his annual summer job as a kid and a college student, plus weekends all year round. At his peak, he did 75 shows in one year. After law school he kept performing as often as he could. Bobby Lilly was the House Magician at Mountain Lake for a time, and he regularly played at The Greenbrier and The Homestead. He performed at corporate conventions, company picnics and so many birthday parties that he stopped doing them once his daughter was born. “I was spending more time with other peoples’ children than my own,” he states.
Even as his law career has grown, and he became first the assistant Commonwealth’s Attorney in Pulaski County and now the Commonwealth’s Attorney in Giles, magic is still a passion. He continues with several personal favorite engagements, such as holidays at The Greenbrier and Carilion’s Child Safety Day.
Bobby can also use magic in his legal career, whether breaking the ice with traumatized children who will need to testify in court, or bringing home a point about the consequences of choices in a Drug Court situation. He finds that his training as a magician has given him profound life skills, such as being able to communicate effectively with others and being able to see things from multiple points of view that are equally important in the law.
Best of all, he declares: “Magic and balloons are the great equalizers. Everyone turns into a kid again, and it’s impossible to frown when you’re wearing a balloon hat.”