5 years ago
The Entrepreneurial Doctor Is In . . . a new business model in healthcare 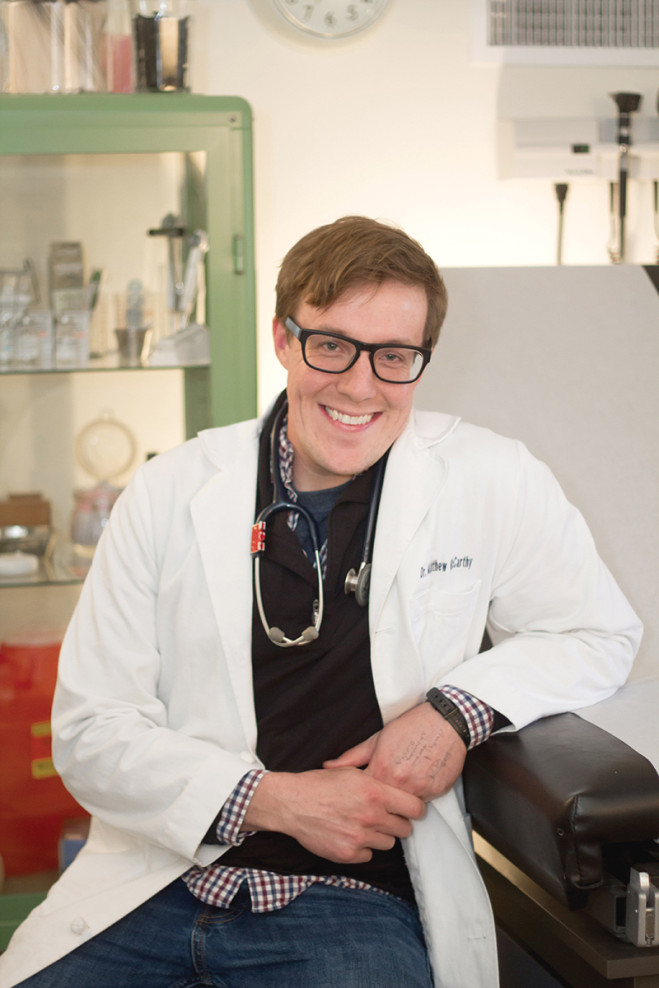 Dr. Matthew McCarthy, Doctor of Osteopathy (DO), employs an innovative model of healthcare that allows a direct relationship between the patient and physician without involvement of third party insurance, drug or hospital corporations. It’s called direct primary care. “Our current system is broken,” he says. “Patients can be taken care of and be happy without bureaucracy.”

A Georgia native, Dr. McCarthy always wanted to be a family practice doctor. During high school and college he worked as a nurse assistant, emergency room technician and monitor technician in an intensive care unit. After graduating from Toccoa Falls College in 2007, he and wife, Valerie, moved to Blacksburg for medical school at the Edward Via College of Osteopathic Medicine. Dr. McCarthy graduated in 2012 and completed his three-year family practice residency in June of 2015.

While most direct primary care practices are located in larger population centers, with the nearest ones being in Charlottesville and Lynchburg, Dr. McCarthy chose to open his practice in a small town. Not only did family-friendly Blacksburg fit his personal needs – he and Valerie have one child and another on the way – but he felt that the town was “uniquely suited” for this new idea given its varied population mix and the willingness of people in a college town to “step outside the box” by embracing this “mind-bending” concept.

Indeed, his practice has a number of distinctive aspects. He provides holistic outpatient primary care for the family, with special attention to pediatrics. Instead of accepting insurance, Dr. McCarthy enrolls patients in the practice based on monthly membership fees (see sidebar). Patients have access to him 24 hours a day for telephone triage. Dr. McCarthy will also make house calls for some who have difficulty getting to his second floor office. Occasionally, if a patient cannot pay, he will barter.

The common thread in his practice is patients who are frustrated about not having enough time with their conventional physicians. “I see six to 10 patients per day,” he explains. “The national average for primary care is 20 to 30 per day. This means I have time to develop a relationship with each of my patients.”

Molly Entrekin concurs. “The thought of having one doctor who would get to know us and aptly handle our medical needs” attracted her family to Dr. McCarthy’s practice. She appreciates his “fantastic bedside manner,” plus the convenience of his seeing more than one family member at a time. “We also like that he is not bound by what the insurance companies dictate doctors can and cannot do,” she adds.

While “trying out” direct primary care, the event that solidified Mary Jaasma’s commitment to Dr. McCarthy was when her toddler tripped and split her forehead open. “It was just before bedtime and instead of a late rush to the ER, which sounded unpleasant and stressful for all of us, we were able to just pop over to see Dr. McCarthy for stitches. I couldn’t have imagined a more calm and painless experience for her – or for her frazzled parents!”

Dr. McCarthy’s patients run the gamut in terms of socio-economic status and age. His structure benefits those who spend most of their medical dollars with their general practitioners, as well as working families whose insurance is mediocre or comes with high co-pays. It also pairs well with catastrophic health insurance and health saving accounts to pay for expenses his model cannot cover.

Becoming a healthcare entrepreneur was a risk. But, says Dr. McCarthy, “We are growing steadily and have been very impressed and overwhelmed with this model, the relationships we have made with our patients and with support from the community.” The plan is to cap patients at 600 so that Dr. McCarthy can still know them all by name. He is on track to achieve this within three years. Getting people in the door is the hardest part, he says; word of mouth is his best form of advertising. While his practice builds, Dr. McCarthy has a second job as the doctor at two super-max prisons – an interesting endeavor, he relates.

So how does a physician make a profit seeing so few patients? Dr. McCarthy engages in what he calls a “micropractice” with minimal overhead. This entails having a small office, one nurse and no insurance billing office staff, which means he can earn a salary comparable to his conventional medicine counterparts.

“People are closely watching my practice,” Dr. McCarthy says. Physicians want to join as partners once he hits his patient goal. Still, it’s not only about business to him. He repeatedly describes his job as fun. However, “my primary goal is to help the underinsured and the uninsured in being able to have access to quality medical care. I’m grateful that I don’t have to continually check my watch during my patient visits any longer.”

Dr. McCarthy’s practice is reminiscent of the old-fashioned days of practicing medicine, where the doctor knew the people he took care of and considered them friends. Something, says Entrekin, “we thought we would only see on the old movies and television shows.”