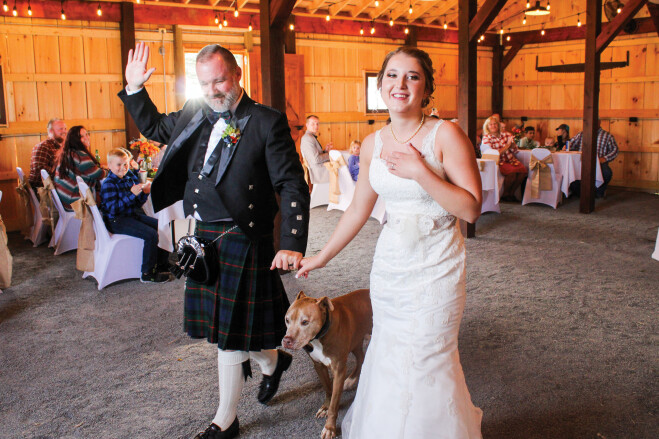 To step into their future together, Stu and Rachel Nelson brought a little of the past along to honor their combined local and global heritage.
There’s Appalachian folklore about burying a bottle of bourbon at the wedding site. “This is a long-standing Southern tradition,” Rachel explains, “where the bottle of bourbon is buried 30 days in advance to ward off rain on the wedding day.” Well, that works! No rain on this parade! The couple buried a bottle of Jim Beam black upside down, then dug it up on their wedding day – and drank some.
Stu’s mother moved from her native Scotland to Canada with her parents when she was pregnant with him. Though he grew up north of our border, Scotland has always been near and dear to his heart. When the topic of his outfit surfaced, there was no hesitation. He would wear a kilt in his Gunn clan tartan with the pin. He sported the traditional jacket with a sporran, a pouch which serves like a pocket, since the kilt does not have any. He finished the ensemble with a “sgian dubh” in his sock. It is pronounced “skeen doo” and is a dagger with a fixed blade whose origin in the sock is up for debate.
The date of October 23 was intentional, as in 10-23. The ten-codes or ten signals are common short codes to convey information in law enforcement, the field in which both of the Nelsons work. And 10-23 means: Arrived on the scene. Clever and appropriate.

On a 3-month schedule, Stu and Rachel found the venue first. It was the third ceremony held at Round Rock Farm, a new idyllic outdoor venue in Wythe County. “My husband, Paul, built our barn in six months for our daughter’s wedding the previous month,” states Angie Akers. “It was a gorgeous ceremony and reception, and since we now had the 40’ x 40’ rustic, wood, pole barn, we decided to open it for weddings between April and October.”
Rachel traveled to Bristol Bridal Station just over the Virginia line for her dress. “All their wedding gowns are new,” she states. “It’s a not-for-profit business dubbed ‘Couture for a Cause” where each one sold [no sales tax] provides support to women and children in the YWCA programs. Many are victims of domestic violence, and I liked that my money was going somewhere that meant something.” Her mom, Lucy Copeland, actually picked out this wedding gown for her only daughter, adhering to Rachel’s wishes for something modest, while also pretty and sexy like a bride.
The five bridesmaids and three maids of honor were all very close friends. “I couldn’t choose between them, so I had three maids of honor figuring it was my wedding, so I could do what I wanted there.” There were also 8 groomsmen, many of them colleagues of Stu’s at the Pulaski County Sheriff’s Office.
Sarge, Stu’s American pit bull rescue dog, 8, came out with him and sat next to him during the ceremony. “He is very well-trained and stayed close to us, most of the time,” Rachel relates. “He also enjoyed calmly wandering around the reception, getting an abundance of snacks.”
Rachel knew of the photographer, Jade McManus of Don’t Blink Photography, through mutual friends. The price was reasonable, and she was available. The DJ was Jody Pyles, a musician from Radford and personal friend.
Mission BBQ was selected as the caterer, in part for their dedication to veterans, but also because the price and the quality of food was simply the best for them. Choices were abundant and delicious, with pulled pork, beef brisket and chicken BBQ plus three sides.
Erin Worrall, Lucy’s next door neighbor, served as wedding planner, and she was awesome for connecting the dots on all the details. She accompanied Rachel and others to Hobby Lobby to choose the flowers, some singles, some clumps. Once Rachel told Erin the look she wanted, Erin made it happen, arranging the flowers herself, in addition to coordinating the photographer, the rehearsal, who would be where and how things would unfold.

The day dawned with blue sky and sunshine – credit the bourbon bottle? – and everything came together nicely. The crowd of around 120 sat on hay bales. Her grandfather, Jim Copeland, 88, read a scripture passage from the Bible during the ceremony.
It was so beautiful, says Lucy. “The arch outside [also handcrafted by Paul Akers] frames the Southwest Virginia mountains. It was an awesome, rural setting for an enchanting wedding with tables inside and outside the barn for dining and relaxing.”
The wedding cake was made, decorated and delivered by Baked with Love by Rhonda and Beth (on Facebook), plus 100 cupcakes. “Don’t sweat the small stuff,” Rachel advises. “Things are going to happen along the way. You might have to deal with difficult people. We had a short timeline. Let people help when they offer.”
So in short: Country wedding, 10-4. They arrived, 10-23. Congratulations Mr. and Mrs. Nelson!