3 months ago
Sport with a Bit of an Edge 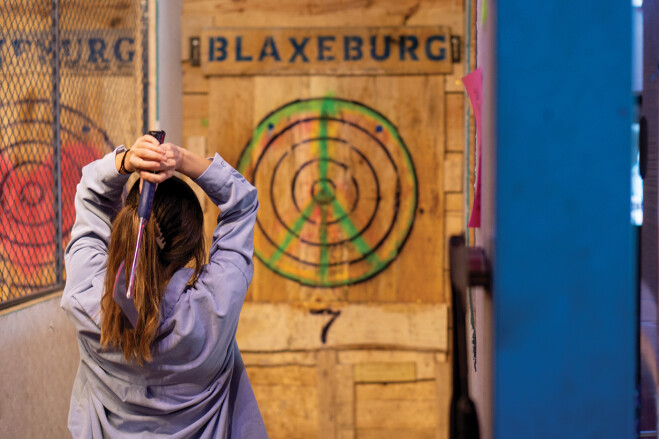 At a party back in my 20s in Boulder, Colorado, I could make a rum-and-Coke-over-ice or one can of Coors beer last several hours. That might make me the only sober person in attendance. At one house, someone drew a circle on the wood kitchen floor and pulled out the kitchen knives. We started tossing them to see what stuck. I concentrated on my toss, velocity, how many times it circled and what I was doing right when the blade tip hit the floor and the knife stood still, ideally near the center of the circle.
Years later when I became a landlord (in Blacksburg) of two houses with wood kitchen floors, I was tempted to put a clause into the lease not to toss knives into the floor. I never added that, and no one did it.
Well, that came to my mind when I learned about Blue Ridge Axe Throwing in downtown Blacksburg. Wednesday features half price for ladies, so I handed over a $10 bill for 20 throws plus an axe coach.

Roanoke-based brothers Matthew and Mitchell Tyler, along with their dad, J.R. Tyler, own two Safeside Tactical shops with gun ranges. When an axe throwing business next to their Roanoke location was for sale, they bought it and soon after opened one in Blacksburg. It’s been less than two years, and business is good enough to expand already. By the end of the year, Blue Ridge Axe Throwing will be around the corner from its Jackson Street spot in the former Mish Mish store on Main Street across from the Post Office.
Managers Sarah Pettengill and Zach Corona share responsibilities. Sarah marked her one-year anniversary on the job on August 23. “After graduating from Radford University, I worked as the Camp Director of Girl Scout Camps in the southeastern region of the state. I wanted to find a job in the New River Valley, because it’s such a wonderful place to live.”
Pettengill had axe throwing and instruction experience, but will humbly admit: “I’m not the best coach with the most skills. I have pretty good management and event coordination experience, however.” She serves as opening manager, while Corona is the closing manager and an excellent axe coach.
The staff cleans, sharpens and maintains all the axes and knives, in addition to wrapping some of the handles with paracord or duct tape. There are seven axe throwing lanes, about 4 ½ feet wide and 12 feet long. Each participant is responsible for retrieving whatever has been thrown. If two adjacent lanes are being used, each thrower coordinates so both retrieve their axes, knives, etc., at the same time.

Walking in the door is a happy, multi-sensory experience with lights flashing, colorful carpets and random arcade game sound effects. I was not wearing closed-toe shoes and was offered a sanitized pair of crocs. Tip: Wear closed-toe shoes.
My axe coach, Madie Bradshaw, selected an axe for my intro to the two-handed throw. She’s a senior at Radford University, majoring in English with an eye to professional writing. She’s also an excellent axe thrower and coach. Her instructions and demo were fairly simple – how to stand, how to hold it with the dominant hand on top, position it perpendicular to the floor with arms out in front before taking it over your head and back to the front, letting go when your arms are straight again, keeping your wrists stable.
It doesn’t take much strength, but some concentration on your arms, wrists, motion and timing. Ideally, the blade embeds itself into the target after one 360° rotation, which I did well with the first two throws. Andrew L. Wolf, one of the Roanoke coaches, who is an axe master and very clever blog writer, insists that if you can learn to use a spoon, you can throw an axe. It’s more about technique than strength, and I second that.
The single-handed axe toss is much harder, as the axe tends to wobble without the other hand to steady it. The Hawkeye axe is fun because it has points on both sides of the blade, offering twice the possibility of sinking it into the target board. They have impressive knives to throw, which I found the most difficult to stick, but the 4-pointed throwing stars are super fun. All four of mine stuck – having four times the points is helpful. It would be hard not to sink a throwing star.
It was fun. I’d rather go trail riding, but I like having a rainy day back-up activity, especially one with a bit of an edge.
Blueridgeaxe.com
Open Tues-Sunday, closed Mondays
Available for private events