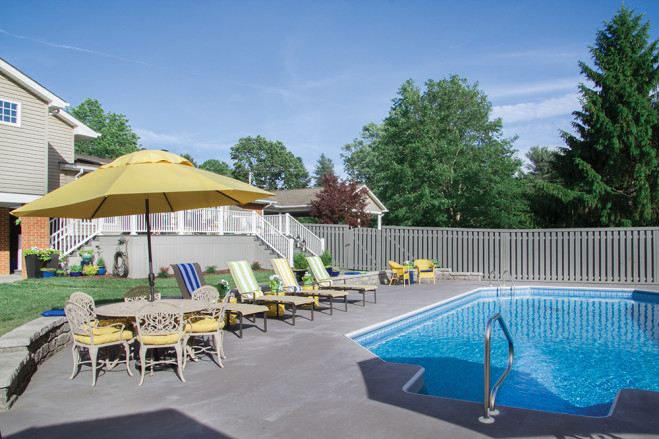 As small business owners, Paul and Debbie Ewing rarely get an opportunity to take a vacation. And why would they want to? The Ewings recently remodeled the kitchen of their ‘70s-era split-level house and added luxurious outdoor features, making the home an oasis in the middle of Blacksburg.

Fifteen years ago, the Ewings, who own Ewing Building & Remodeling and Ewing Cabinet Company, demolished their old kitchen by moving walls and enclosed a porch to make it a sunroom. This time, though, there were no structural changes. The design evolved over a couple of years as Edith-Anne Duncan, Interior Designer, sent Debbie to various websites and the Ewings’ own staff designer, Sara Jones, sent her places to look at ideas. Debbie started a file which bolstered her vision.

The homeowners undertook this remodel because the previous layout was not as conducive to grandchildren as the new open plan. The couple also wanted to showcase their own companies’ offerings and construction ability, as well as their partner suppliers’ wares. While Paul was able to tell Debbie what was possible building-wise, the downside to being in the business was that the remodel took longer since their clients’ needs always came first. They were also willing to wait on certain things like a particular floor installer they wanted to employ. The project consumed three months, during which time they used kitchen electrics in their basement playroom and used the opportunity to frequent favorite local restaurants.

Several innovative features grace the revamped Ewing kitchen. “A new seamless cabinet door style on the upper cabinets uses medium density fiberboard [known as MDF], which is a great option for painted cabinets,” says Paul. “It is less expensive and more durable than traditional cabinetry.” A specialized coffee center is hidden behind cabinets to keep the countertops clear and still provide easy access. Pop-up stands for the mixer and food processor make food preparation a cinch. Debbie’s baking area uses her old portable butcher block island, which is a lower height on which she is accustomed working. While most items are behind cabinets, there is convenient open shelving for the dishes they use every day.

Sara emphasizes the importance of “measure, measure, measure” since they kept everything to the footprint of the existing kitchen. “As a result of Sara and Paul’s careful planning,” Debbie explains, “there were no ‘gotchas’ or nasty surprises.” Some items were repurposed during the remodel. Older black cabinets became a bar area, and a dessert bar uses a previous drawer base. Edith-Anne had the back interior walls of Debbie’s china cabinet painted green to make the china pop. The Ewings sold the rest of the cabinets along with countertops and old appliances.

“Lighting was a big change, too,” Edith-Anne states. “Polished nickel is timeless and classic, but sophisticated and casual. We wanted the space to be approachable and refined at the same time.”

The genesis of the decorating scheme was stained glass that Debbie already owned. She wanted to pull out the colors blue, green and yellow plus use crisp white. These colors continued into the sunroom, with Edith-Anne using Sunbrella® fabrics to withstand wear and tear. “Details added up,” says Edith-Anne. For example, she used the same polo blue on furniture legs in the sunroom that is on the base cabinets in the kitchen. Trendy shiplap board was installed on the kitchen walls and carried through to the sunroom. At Edith-Anne’s suggestion, Debbie has three wipe-off vinyl-topped stools at the kitchen island to accommodate her three granddaughters who like to help her cook.

Edith-Anne also created a banquette in the sunroom that uses the same surface as the kitchen countertop and provides additional, flexible seating. Debbie says that the couple might host up to 40 people at Thanksgiving, as well as neighborhood parties, family reunions and client dinners.

Outside, the Ewings had built a deck 15 years ago to have an outdoor place to sit after their porch became the sunroom. They included another outdoor seating area built around Debbie’s garden shed. More recently, the couple added a swimming pool, which fits perfectly onto their large lot and is a hit with the grandchildren. The sunroom colors tie together with the loungers and towels Debbie uses on the pool deck. There is a covered living space that leads to the patio and pool. Debbie finished the area with a fish water feature and a trellis to cover the electric boxes.

Paul notes that it is best to use professional designers. “In addition to doing things right, they come up with changes you would not necessarily think of,” he says – like Edith-Anne telling Debbie to think outside the box. “It may not be the cheapest way to go, but it is the smart approach.” Debbie is thrilled that the team of Paul, Sara and Edith-Anne helped with her dream kitchen. “I wouldn’t change a thing,” she smiles. High praise, indeed.