5 years ago
Southwest Virginia on Ice 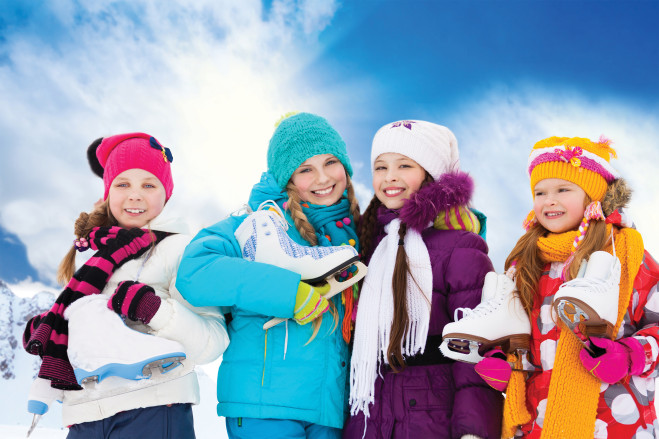 The first time the temperate drops enough to freeze nearby ponds, the winter world truly becomes a wonderland. The fascinating feeling of ice underfoot brings out the kid in all of us, and gliding across frozen water is pure magic. While I know a few brave souls who have skated across Pandapas Pond in the dead of winter, I wouldn’t recommend it. Hearing the ice stretch and fracture while bubbles begin to rush to the surface is nothing short of terrifying, so instead of gambling with Mother Nature’s temperament (and temperature), head to a local ice skating rink for a safer, more solid choice.
As early as November, you can go to the outdoor ice skating rink at Elmwood Park in Roanoke and rent a pair of ice skates for $2. They have both figure skates and hockey skates and adorable seal skating aids for beginners. You can get your skates, admission to the rink, and unlimited access to the super-fast ice slide — which is basically a human ice luge – for just $10.
Another popular ice skating spot is the Berglund Center. While Elmwood on Ice can hold 75 to 100 skaters, the Berglund Center can hold up to 300. At both rinks, skaters can choose between figure skates and hockey skates, depending on preference and skill level. Hockey skates offer thicker blades, and it is harder to stop. If you’re a beginner who simply wants to learn some ice skating basics and have a little fun, figure skates are a good choice. When trying on a pair of skates, make sure they fit snugly and are not too tight or loose. You want your ankles to be supported, but you also need enough flexibility to turn and do some basic moves.
There are fun themed skate events at Berglund, such as: “Every child 10 years of age and under who dresses up in their favorite costume will receive free admission” and a skate with Santa event. The season’s final themed event is on St. Patrick’s Day, when all children 10 and under who are dressed in green receive free admission.
Ice skating at The Greenbrier in White Sulphur Springs, W.V., is a magical wintertime experience. Since it is an outdoor rink, the opening date is weather-dependent, but generally it runs from early November through early March. You can rent skates for the entire day or just for an hour, and the setting is nothing short of idyllic.
Charlottesville Ice Park inside the Main Street Arena in downtown Charlottesville serves as an indoor ice rink during winter and transforms into an indoor facility for various sports during the summer. If you’re looking for an activity for the family or just an afternoon getaway, the public skating is perfect. Check the schedule for dates and times, because they also offer sessions on Freestyle, Learn to Skate, and Learn to Play Hockey for all different levels. A night out on the town with a special someone or group of friends can include a Late Night Skate session, which is guaranteed to get you moving and grooving. They bump the music and get the lights going to make sure everybody has an enjoyable time. The Charlottesville Ice Park also hosts youth and adult hockey leagues and a skating school for all levels.
These ice skating rinks involve a little trip from the New River Valley, but there might be something here soon. Christiansburg is considering shutting down Hickok Street and installing an outdoor ice skating rink during the winter months. Looking for ways to bring people downtown during the winter season, Councilman Henry Showalter notes that Elmwood on Ice has been very popular, even when the weather dips below freezing. If done right, the proposed changes to Hickok Street could end up being a new town square for Christiansburg, with the Farmer’s Market right in the heart of West Main Street. Officials have discussed turning the street into a pedestrian mall and installing park benches, an archway, stage and even string lights to add to the ambiance.
Downtown Christiansburg, Inc., President David Franusich states: “If you can bring people downtown in any way, it’s fantastic.” And speaking on the idea of an ice rink, he adds: “There’s nothing like that in the New River Valley.”
In the meantime, take to the ice somewhere this winter. Whether it’s an indoor ice arena or an outdoor rink, it will be fun. Be sure to bundle up – and wear clothing that will help protect you from the inevitable falls if it is your first time skating on ice. Gloves are a good idea, too, waterproof ones. Steer clear of the “speed skaters” and take your time. It is worth getting the hang of things like stopping and turning before trying to win Olympic gold.

Elmwood on Ice, open Wednesday through Sunday, as early as 11 a.m. and as late as 10 p.m. Season pass, $75, skate and slide any time Elmwood on Ice is open. www.downtownroanoke.org/events/elmwood-on-ice

NOTE: As of press time, Main Street Arena in Charlottesville had been sold, and some reports indicate this is the last year for ice skating.

Emily K. Alberts had her very own pair of classic white ladies ice skates growing up in Virginia Beach, though she rarely got to use them. She is a regular contributor to New River Valley Magazine.